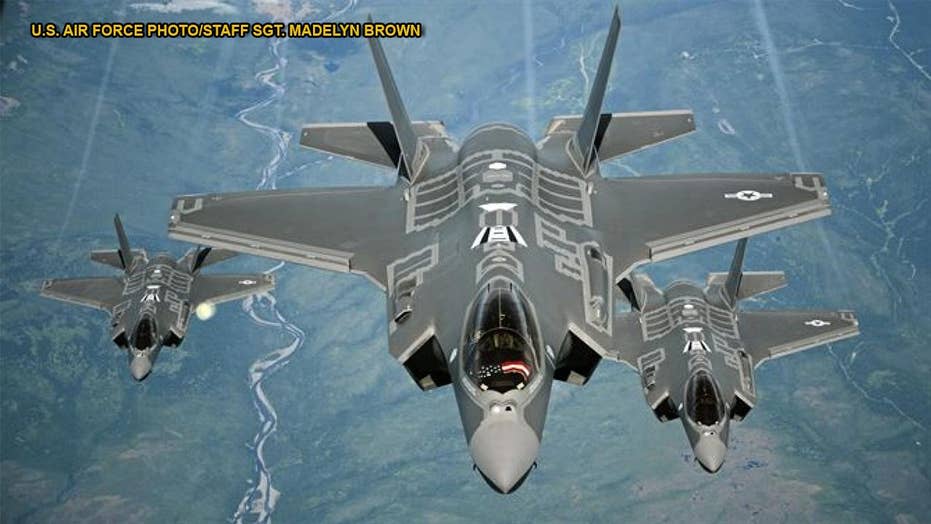 The Air Force Research Lab and Office of Naval Research are currently developing fast and precise laser weapons that can “burn holes” through enemy targets at the speed of light. Concurrently, the U.S. Navy is developing a laser-application for its Marine Corps F-35B, intended to effectively maintain the stealth fighter for future decades of war.

The Pentagon is sending more than 50 F-35 Joint Strike Fighters to Europe over the next few years to deter Russia and help NATO prepare for an entirely new kind of warfare.

Although the full number of just over 50 combat aircraft won’t arrive until the early 2020s, preparations are already underway. The Air Force didn’t specify where the F-35s will be sent, citing security reasons. However, there are numerous vital strategic areas in the region, such as the Baltics and places in Eastern Europe, that might be considered.

Emphasizing that the arriving fighters will “train and operate” together with European allies, Holmes said the move was “important to our ability to compete and deter in Europe.”

Bringing F-35s to the European continent introduces a range of new attack options for U.S. and NATO forces seeking to prevent potential Russian advances. It brings 5th Generation stealth, which includes targeting sensors with never-before-seen range, new air-to-air weapons and a dronelike ability to surveil and target areas of interest.

U.S. and allied F-35s all have a common data link which enables dispersed, yet networked, attack options. In a tactical sense, it seems that a high-speed F-35, fortified by long-range sensors and targeting technologies, might be well positioned to identify and destroy mobile weapons launchers or other vital, but slightly smaller on-the-move targets.

"Once the F-35 gets there you will see it be moved around and used. It will operate with our allies, reassure them and do some deterrence as well," Col. William Marshall, 48th Fighter Wing Commander, told reporters at AFA. The arriving F-35s will work through U.S. Air Force Europe.

The weapons, the ISR (intelligence, surveillance and reconnaissance) technology and the multirole functions of the F-35 provide a wide range of attack options should that be necessary in the region. The F-35 has completed a series of weapons separation tests and is currently able to be armed with the AIM-9X, AIM-120, AIM-132, GBU-12, JDAM, JSOW, SDB-1 and the Paveway IV, Lockheed Martin data states. The F-35 is configured to carry more than 3.500 pounds of ordnance in stealth mode and over 18,000 pounds uncontested.

As part of this equation, an F-35 might also increasingly be called upon to function as a key element of U.S. nuclear deterrence strategy. In recent years, F-35s were deployed to the Pacific theater to participate in military exercises over the Korean Peninsula.

Utilizing speed, maneuverability and lower-altitude flight – compared to how a bomber such as a B-2 would operate – a nuclear-capable F-35 presents new threats to a potential adversary.

LOCKHEED MARTIN F-35 LIGHTNING II: THE FIGHTER OF THE FUTURE

A nuclear-armed F-35 will be able to respond much more quickly, with low-yield nuclear weapons, in the event that new intelligence information locating a new target emerges. Lower-yield nuclear weapons on the F-35 could enable highly destructive, yet more surgical, nuclear attacks to eliminate targets without necessarily impacting much larger swaths of territory.

Air Force officials say the service is now integrating the B61 mod 12 nuclear bomb into the F-35 as part of an upcoming 4th software drop. The Block 4 F-35, to fully emerge in the next decade, contains more than 50 technical adjustments to the aircraft designed as software and hardware builds -- to be added in six-month increments between April 2019 to October 2024.

The latest version of the B61 thermonuclear gravity bomb, which has origins as far back as the 1960s, is engineered as a low-to-medium yield strategic and tactical nuclear weapon, according to nuclearweaponsarchive.org, which also states the weapon has a “two-stage” radiation implosion design. The most current Mod 12 version has demonstrated a bunker-buster earth-penetrating capability, according to the Federation of American Scientists (FAS).

The B61 Mod 12 is engineered with a special “Tail Subassembly” to give the bomb JDAM-type GPS accuracy, giving a new level of precision targeting, according to data provided by the Federation of American Scientists.

The text of the administration’s Nuclear Posture Review, released last year, specifically cites the importance of dual-capable aircraft (DCA) in Europe and states that a nuclear-armed F-35 is fundamental to deterring Russia.

"We are committed to upgrading DCA with the nuclear-capable F-35 aircraft. We will work with NATO to best ensure – and improve where needed – the readiness, survivability, and operational effectiveness of DCA based in Europe," the Nuclear Posture Review states.

“We want the F-35s to be both predictable and unpredictable,” he said.