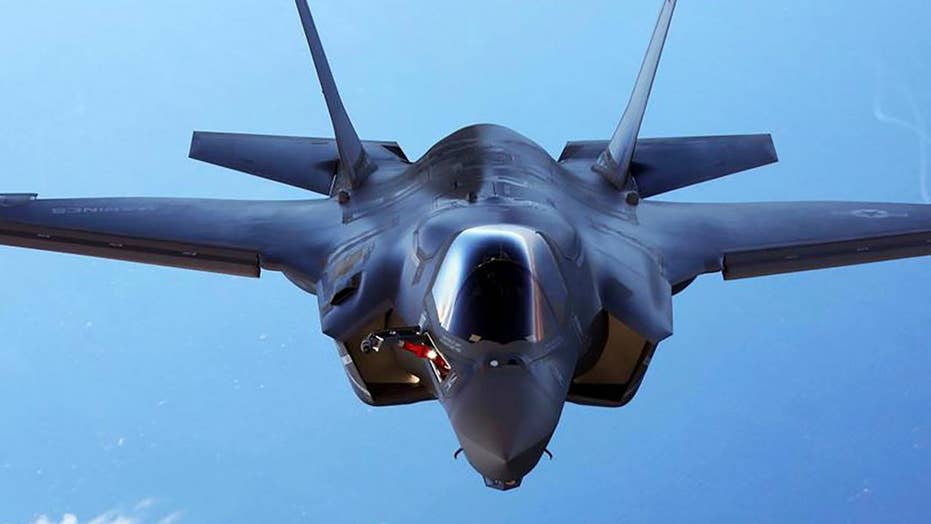 Filled with stacks of fuselage panels, engine components and a wide assortment of pipes, electronics and avionics, the sprawling F-35 construction facility in Ft. Worth, Texas, resembles a small city filled with engineers, mechanics, electricians and airplanes at various stages of construction.

While some stations include vertically-hanging airplane wings, rudders, pipes and intricate collections of wires running through the fuselage, others contain little more than an assortment of seemingly disconnected small parts. Farther along the mile-long construction strip, heavily trafficked by workers, builders and engineers, there are bays with nearly completed F-35 with a light-green exterior. These “about to be finished” F-35s, roll into a separate environmentally-controlled hanger where they await a final coat of blended gray paint - giving the aircraft its color.

After watching a certain amount of varying airplane structures and configurations, to include pipes, computer parts and larger components such as wings, tails, rudders, engines or a mounted 25mm cannon - an observer can begin to discern the differences between the variants. The F-35C is the largest, built with a larger wingspan and tail for carrier landings; the F-35A includes a visible fuselage/wing-mounted 25mm cannon buried beneath a stealthy, rounded exterior blending the weapon into the body of the plane; the F-35B is, developers say, the most expensive and technically complicated of the group.

During construction of an F-35B, a visible “LiftFan” is engineered into a forward part of the center fuselage just behind the pilot to enable massive downward vertical thrust. Horsepower is sent to the LiftFan from the main engine through a “spiral bi-level gear system,” Rollys Royce information states.

This horsepower, when combined with the LiftFan, generates the downward thrust necessary to enable the “hover” ability and vertical landing. An F-35B has what looks like a square door or opening on top of the fuselage behind the pilot and above the lift, fan to maximize downward air flow. Engineers explain that the massive thrust, sufficient to propel the aircraft up to speeds beyond the sound barrier, results from a four fold process. Air ducts on either side of the nose “suck” in air to the engine, the air is then compressed before being ignited with gas -- generating what looks like a controlled explosion of fire coming out of the back. The force generated through this process, enables the speed, maneuverability and acceleration of the aircraft.

Mechanical information provided by F-35B engine maker Rolls Royce states “To achieve STOVL, the lift fan component of the LiftSystem operates perpendicular to the flow of air over the aircraft." The LiftFan can operate in crosswinds up to 288mph, Rolls Royce data explains.

Stealth, or Low-Observability operations hinge entirely upon a specific set of specialized construction techniques, according to engineers familiar with the process. While many if not most of these techniques are, understandably, not available for public reports for security reasons, there are many public elements of the technology written about for public consumption by engineers and many of the industry developers involved in F-35 construction offer detailed profiles of their contributions to the airplane.

A peak inside a Lockheed Martin factory.

A seamless-looking exterior -- devoid or sharp contours, external structures and protruding “edges” more recognizable to enemy radar -- contains a secret blend of composite materials designed to engineer a radar-absorbent airplane. Weapons can be carried internally so as not to expose shapes vulnerable to enemy radar. One commonly discussed element of stealth coating includes the use of “carbon fibers” to - among other things - reflect electromagnetic energy from the surface of the material.

Carbon materials are long-known to have contributed to stealth configurations. Interestingly, a 2016 essay from the Smithsonian Air and Space Museum cites a 2008 expert assessment in which Northrop Grumman engineers sought to determine if a 1943-built German Horten 229 prototype aircraft contained elements of stealth technology - decades ahead of its time. The Nazi aircraft was beset with technical problems and failed a few test flights. It never saw combat, but some of the adhesives, wood and other materials - coupled with its horizontal “all-wing” like configuration, have inspired many to view the aircraft as an early iteration of what became stealth technology. Carbon-like materials were found in the investigation; the engineers Dobrenz and Spadoni write "during our inspection of the Horten 229 at the Smithsonian museum, it appeared that a material similar to carbon black or charcoal was mixed in with the glue between the thin layers of the leading edge shape.”

Whatever the particular composition of the material, the stealthy exterior of the F-35 represents an effort to achieve low-observability, survivability and lighter weight to enable speed and maneuverability. The seamless F-35 structure is, by design, a result of a particular engineering technique.

COULD CHINA LEAVE THE US BEHIND IN AI 'ARMS RACE'?

“Every hinge, every bolt, every fastener and every panel is closed back up when we are done with work on the airplane, so every time we take off we are in that stealth, non-detectable configuration,” Billie Flynn, F-35 Pilot, Lockheed Martin, told Warrior Maven in an interview.

Electronic pings generated by enemy radar, need specific structures against which to bounce off - sending a return signal. If a fuselage is configured such that it does not offer those structures and edges against which an electromagnetic ping can collide, shapes and contours defining an aircraft are more difficult to detect. In essence, it blinds or removes the return signal, and radar is unable to produce a “rendering” of the fighter jet. As an electronic signal, radar emissions travel at the speed of light - a known entity. If the speed of light, which is fixed, is known and the amount of travel time is also able to be determined, then algorithms can calculate the exact distance, shape and even speed of an object.

“We hide the radar, antenna and fuel -- they are all protrusions which reduce hope that you would ever reduce vulnerability,” Flynn said.

Flynn explained that the stealth engineering contributing to the F-35 has some origins as far back as the Gulf War-era F-117 NightHawk. “With the F-117, we learned how to embed antennas in the leading edge of the airplane. This concept went right into the F-22,” Flynn added.

Flynn also explained that every F-35 sensor was “flush-mounted,” or built into the skin of the aircraft, making the plane less detectable to enemy radar.

Reducing the heat emissions, or thermal signature, is also known to be of vital importance to preserving stealth. There are a variety of ways this can be accomplished, such as burying engines inside an airplane to lessen the release of heat. The F-35 is built with small coolant tubes running under the wings into the body of the aircraft, designed to dissipate the heat generated by the airplane’s avionics and electrical systems. This avoids overheating and controls overall airplane temperatures. Controlling temperature also enhances the stealth properties of the aircraft. Fuel traveling through pipes underneath the airplane also brings a cooling effect, engineers say.

IS SKYNET A REALITY?

“We can take full advantage of our stealth signature to penetrate enemy defenses, whereas a 4th Gen fighter will have to operate outside of those areas. We can go inside there and fill that close-in air support role,” Flynn said. “We can stay outside of small arms fire because of the sensor suite.”

Overall, Lockheed has delivered more than 360 airframes to 16 bases worldwide and plans a production rev up to meet growing international and US military demand, Edward “Stevie” Smith, Lockheed’s Domestic Director of Development for the F-35, told Warrior Maven in an interview.

Smith explained that all eight original partners, and new ones such a Japan, South Korea, Belgium and Israel, are advancing plans to produce and develop the aircraft.

“We are on target now for the A-models to be at or less than 80-million per copy,” Smith said.