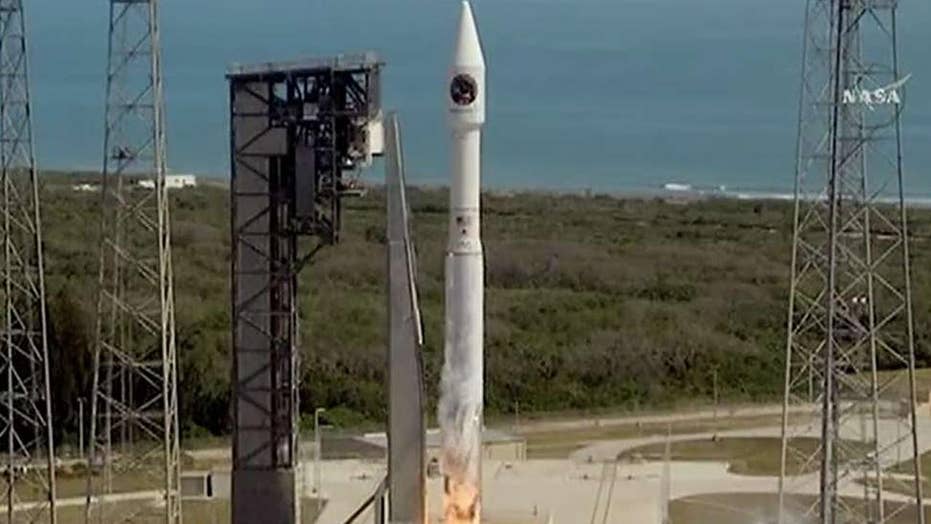 About 7,600 pounds of cargo are now zooming to the International Space Station inside Orbital ATK's Cygnus cargo ship, which has been dubbed the SS John Glenn as a tribute to the late astronaut and senator. Orbital ATK’s Frank Culbertson, himself a former astronaut, said it’s a tribute to the national hero who surged the U.S.’s young space industry with his historic flight 55 years ago, becoming the first American to orbit the Earth.

The Cygnus cargo ship successfully separated from the nearly 200-foot-tall Atlas 5 rocket, which propelled the Cygnus to 10,000 mph and onward toward the orbiting laboratory. The spent rocket fell back to Earth and splashed down in the ocean south of Australia, according to NASA.

Inside the Cygnus, which is shaped like a big cylinder, are all kinds of critical supplies for the astronauts and cosmonauts who spend about six months living in space: food, water, clothing, supplies and hardware for the station. And if astronauts are ever going to spend longer amounts of time in space, or venture out further into space, like Mars, they will need to become “space farmers” to grow their own food supply.

Among the numerous experiments going up is a cutting-edge "space garden" to grow plants related to cabbage and mustard in microgravity, called the Advanced Plant Habitat, partly built by the Sierra Nevada Corporation. It’s about the size of a kitchen oven, and will be used primarily as a test — for now — to see how effective the habitat is at growing flowers related to cabbage and mustard in microgravity.

“It will be the largest production facility for plants ever on the space station, so it’s going to be able to grow larger plants,” said NASA’s Tara Ruttley. “And larger plants lead to things like food production kind of crops.”

The Cygnus will take four days to arrive at the Space Station Saturday morning. It could actually get there a lot faster. But on Thursday, Russia’s Space Agency is launching a Soyuz capsule to bring three more people up to the station. So, the space agencies want the Soyuz to get there first, so that when the cargo ship arrives this weekend, a full six-person crew will be on hand to help unload it.

Space Station Commander Peggy Whitson and Europe's Thomas Pesquet will grapple it Saturday about 6 a.m. with the big Canada 2 arm.

This will be Orbital ATK's 7th contracted mission for NASA and it's final from Cape Canaveral, as it returns to launching from Wallops, Virginia.

And the voice you always hear during a NASA launch broadcast is a man named George Diller, who has calmly and smoothly been counting down rocket launches for four decades.