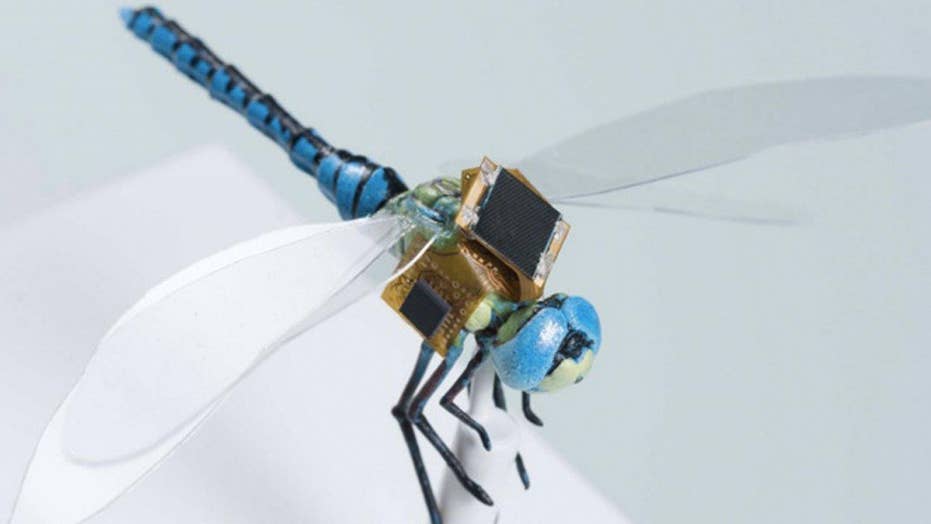 Cyborg dragonflies could spy for the U.S.

Tech Take: Allison Barrie on how insect cyborgs could be used to battle terrorism

Battalions of insect cyborgs - stealthier than any man-made mini-drone - could soon hit the skies to join the fight against terrorism.

Draper, along with Howard Hughes Medical Institute at Janelia Research Campus, have created cyborg dragonflies in an effort to aid intelligence and reconnaissance. Known as DragonflEye, the project would allow the US military and intelligence services to deploy these cyborgs as micro-drones capable of spying for their masters.

In addition to the secretive nature of the drones, they're also expected to be more agile, lighter and smaller.

The US military, like others around the world, has long pursued tiny flying robots to deploy for surveillance. Armed with tech like cameras and sensors, these flying robots could gather data that larger technology or humans could not.

NRA EVENT: INSIDE THE ACRES AND ACRES OF GUNS ON DISPLAY

Many programs building tiny drones are inspired by studies of insects and often try to mimic insects and replicate how they move.

Dragonflies use four independently controlled wings to fly – something rather unusual in nature. This is a very attractive feature for military purposes because the four wings provide key capabilities.

Hovering to listen in on a conversation, rapid direction changes to follow a suspected terrorist, darting to avoid detection and even the ability to fly in reverse to go back and zero in on a license plate. These are great advantages that the dragonflies method of flight can provide.

Found on every continent except Antarctica, dragonflies are also native to all sorts of terrains from desert through to wetlands and sea level through to mountains.

This wide range of habitats, where it can blend in to spy and gather information, makes the dragonfly a good choice.

The technology also has potential to be applied to other types of insects.

There have been many attempts to build machines that replicate the dragonfly, but they've all struggled for a number of reasons.

One key challenge has been the complex aerodynamics of the four wings. Fabrication of such complex creatures at such a tiny size has also been very tough.

Draper has succeeded in achieving these attractive dragonfly capabilities in a different way. Instead of trying to replicate the dragonfly with robotics, their solution is to merge advanced technology with the dragonfly.

There are two fundamental parts to transforming the insects into stealthy recon teams – backpacks for the dragonflies to wear and changes made inside the insect. It uses technology on the inside and outside of the dragonfly to be able to steer it and control its data collection.

Each drone is fitted with a standard issue tiny “backpack," which includes a guidance system with miniaturized, advanced navigation, energy harvesting and optical stimulation technology.

Special neurons are also put inside the dragonfly nerve cord. Guidance commands are sent from the backpack. These connect with these special neurons that then help to steer.

How does the dragonfly operate?

In the simplest of terms, the drone is steered via the light.

HHMI conducted research into the “steering” neurons that control flight in the dragonfly’s nervous system. By using synthetic biology and inserting genes similar to those in eyes, the team was able to make these “steering” neurons sensitive to light.

Draper is developing something called optrodes that activate these neurons with pulses of light. The light is sent from the dragonfly’s backpack and channeled into the nerve cord.

Once kitted out with all the innovations, the operator can guide the dragonfly.

These cyborg drones hold potential to help humans in other ways in the future, including improved medical treatments and agriculture.

The tech developed for DragonflEye could help advance better precision medicine, medical treatments and diagnostics in humans. Ideally, this could then lead to better therapies and elimination of side effects.

For example, Draper’s flexible optrodes could enable miniaturized diagnostics. It could help to safely access neural targets and deliver therapies with more precision.

Another application could be tackling the bee problem. Dragonflies are some of the most agile insects so the backpack tech would also be viable for other insects, including some of the other most agile ones - like bees.

The honeybee population has dramatically reduced. Reduction in pollination is a threat to both US agriculture and future food supplies in general. Honeybees could be equipped with the DragonflEye system so that researchers can monitor their health and behavior. By aiding research, the tech could help solve this honeybee problem.