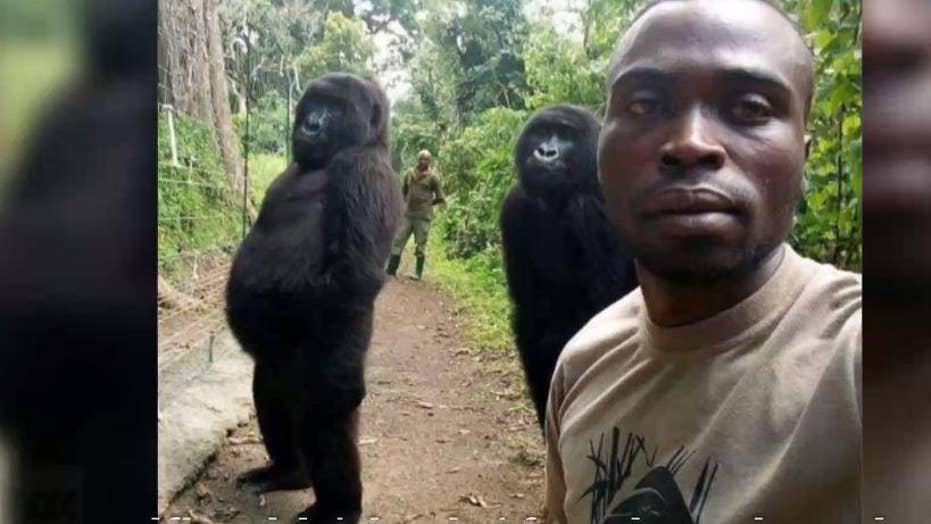 Two ‘cheeky’ orphaned gorillas have posed for an incredible selfie with rangers at a national park in the Democratic Republic of Congo.

In the Facebook post, the organization explained that the gorillas were photographed inside the Senkwekwe Center for orphaned gorillas, which is located at the Park’s headquarters in Rumangabo. “We’ve received dozens of messages about the photo. YES, it’s real!” the Park explained. “Those gorilla gals are always acting cheeky so this was the perfect shot of their true personalities! Also, it’s no surprise to see these girls on their two feet either—most primates are comfortable walking upright (bipedalism) for short bursts of time.”

The striking selfie underscores the close bond between the huge primates and the staff that care for them in the gorilla orphanage.

MONKEY CAN'T OWN THE COPYRIGHT TO ITS FAMOUS SELFIE, APPEALS COURT RULES

“We want to emphasize that these gorillas are in an enclosed sanctuary for orphans to which they have lived since infancy. The caretakers at Senkwekwe take great care to not put the health of the gorillas in danger. These are exceptional circumstances in which the photo was taken. It is never permitted to approach a gorilla in the wild.”

Park rangers at Virunga have an extremely dangerous job. According to the Park’s website, 10 rangers have been killed since the start of 2018, the overwhelming majority of whom were defending the Park against poachers. In April 2018, five rangers and a staff driver were killed in an ambush by poachers.

A UNESCO World Heritage Site in the Eastern Democratic Republic of Congo, Virunga National Park describes itself as Africa’s “oldest and most biologically diverse protected area.” In addition to mountain gorillas, the Park is also home to a number of different primates, elephants, lions and 706 different species of birds.

The Park hopes that the viral image will drive support for its work. “Conserving Virunga’s amazing wildlife is a constant challenge for the Park,” it said in the Facebook post.

Other animal selfies have grabbed attention in recent years. Earlier this year, for example, a snow leopard in the mountains of China became a viral sensation when it discovered a remote camera and ‘posed’ for selfies.

Last year, the 9th U.S. Circuit Court of Appeals ruled that a monkey in Indonesia cannot own the copyright to a famous smiling selfie it took in 2011. Last month, a woman in Arizona was attacked by a jaguar when she jumped a barrier at Litchfield Park zoo to take a selfie with the animal.