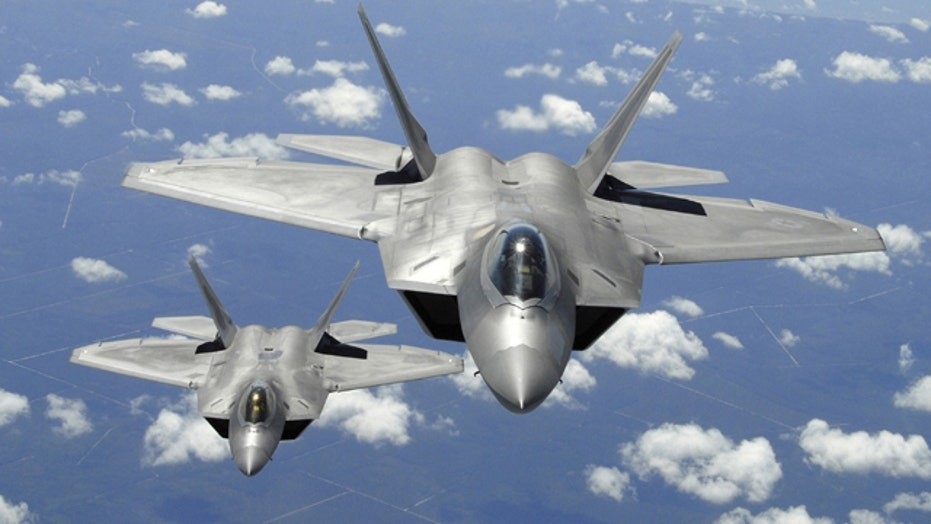 The Air Force's costly and controversial new F-22 Raptor made its public debut during bombing runs over Syria earlier this week and defense experts said they were impressed by the first glimpse of its lethal firepower.

“It seems to have been very successful – it was designed to have that ‘first night,’ precision strike capability,” Rebecca Grant, president of Washington D.C.-based defense research firm IRIS Independent Research, told FoxNews.com. “This proves that the F-22 is a viable combat aircraft and a good air-to-ground weapon.”

Developed by Lockheed Martin, the F-22 has been touted as the world’s premier fighter aircraft and a key weapon in the U.S. military’s high-tech arsenal. However, with a price tag of $67 billion and beset by problems, the F-22 program has come under intense scrutiny. Only 188 of the planes have been built.

Set against this backdrop, defense experts were eager to see if the plane lived up to its billing.

“The U.S. has invested a lot in the F-22 Raptor and the U.S. Air Force has worked so much in the last few years to turn the troubled, expensive interceptor into a real multi-role platform that could be eventually used in a real operation,”  Rome-based aviation expert, pilot, and former Italian Air Force officer David Cenciotti told FoxNews.com in an email. “In this case it was also the chance to appease those who criticized the costly stealth plane and the fact it was never used in combat until a couple of days ago,” he said.

The attack on an Islamic State command and control center in the northern Syrian city of Raqqa was an ideal mission for the F-22, according to experts.

“I think that part of the reason for the use of the F-22 was location,” Grant told FoxNews.com. “The target was right in the heart of a city so they wanted a very precise hit – to destroy the target and not anything else.”

Capable of flying faster than the speed of sound without afterburners, reports also suggest that the stealth fighter routinely flies above 50,000 feet.

Unique for a fighter, the F-22 also carries its bombs internally in a bomb bay, something which gives it more stealth and speed. “If you have the bombs hanging out underneath, it really increases the radar signal of the aircraft, and slows it aerodynamically,” she said.

Media reports have speculated that a 1,000-pound bomb was dropped in the attack on the ISIS command and control center.

The SDBs are a “penetrating, blast-fragmentation warhead for stationary targets, equipped with deployable wings for extended standoff range,” according to Cenciotti, who writes The Aviationist blog. “These bombs are particularly useful to improve accuracy and reduce collateral damage,” he added.

Cenciotti noted that this week’s U.S. airstrikes took place well inside airspace guarded by Syrian air defense radars and surface to air missile batteries, where Syrian planes involved in the country’s civil war usually operate. The F-22’s ability to enter a target area largely undetected is therefore extremely useful. The expert cited, in particular, the fighter’s ability to “gather details about the enemy systems with their extremely advanced onboard sensors, escort other unstealthy planes and, last but not least, attack their own targets.”