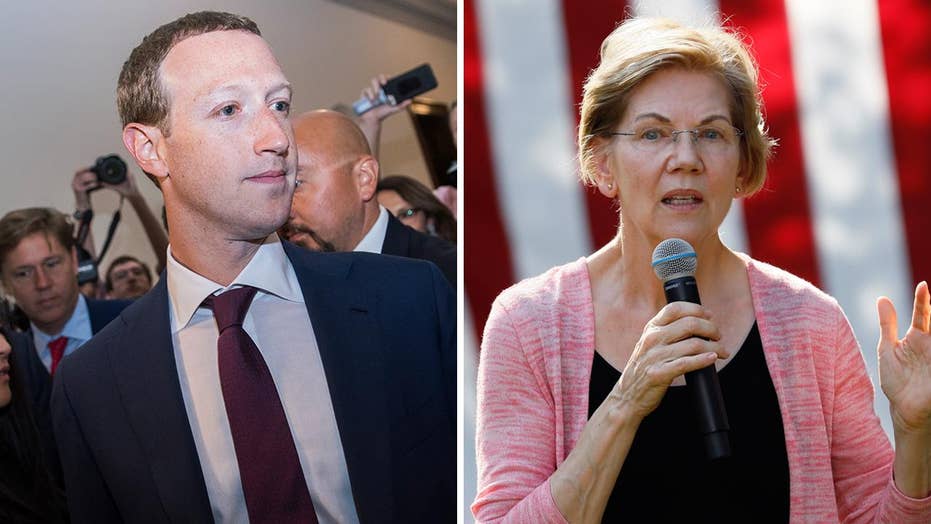 Fox News senior judicial analyst Judge Andrew Napolitano weighs in on leaked audio comments by Facebook CEO Mark Zuckerberg saying he will sue the federal government if Elizabeth Warren becomes president. What, if any, legal options does Facebook have?

Democratic presidential candidate Elizabeth Warren continued her attack on Facebook after audio comments from CEO Mark Zuckerberg were leaked, with Warren stating the company "won't even do the bare minimum to improve transparency."

"Facebook's anti-competitive mergers mean they face no real pressure to tackle disinformation," Warren tweeted on Tuesday night. "They won't even do the bare minimum to improve transparency. Tech giants shouldn't be able to wield enough power to undermine our democracy."

The tweet followed several others from Warren earlier on Tuesday. The Massachusetts senator reiterated her plan that Facebook, along with other Big Tech companies such as Google, Amazon and Apple, should be broken up.

On Tuesday, leaked audio comments from Zuckerberg said the company would likely sue the U.S. government if Warren became president and attempted to break up the company.

"And does that still suck for us? Yeah. I mean, I don’t want to have a major lawsuit against our own government. I mean, that’s not the position that you want to be in when you’re, you know, I mean … It’s like, we care about our country, and want to work with our government and do good things. But look, at the end of the day, if someone’s going to try to threaten something that existential, you go to the mat and fight."