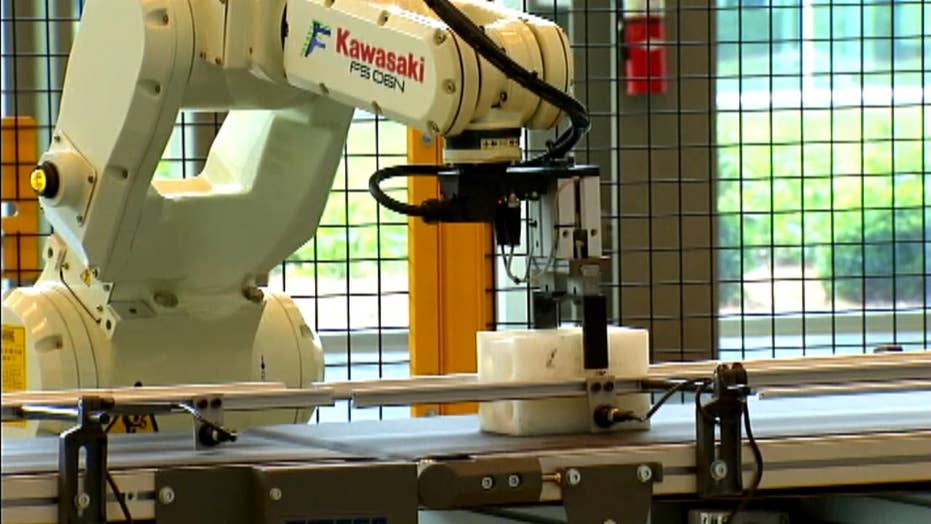 Robots and jobs: How can US workers adapt to automation?

As President Donald Trump seeks to reinvigorate U.S. manufacturing, many industry leaders are looking to robots as the most efficient way for American factories to compete with cheap labor overseas.

“We think robotics has had a positive impact on U.S. manufacturing by creating better, safer and higher paying jobs for American workers,” said Jeff Burnstein, president of the Association for Advancing Automation (A3), a trade group. “Most importantly (robotics is) making American companies more competitive so that they can expand their business and ultimately, in many cases, add more workers than they did before they started automating.”

AUTOMATION CAN REVITALIZE THE U.S. WORKFORCE

According to U.S. Bureau of Labor Statistics data compiled by A3, U.S. companies added a record 136,748 robots to factory floors over the past seven years, while creating 894,000 new manufacturing jobs.

Robots assemble a Toyota Motor Corp. Yaris at the company's plant in Onnaing, near Valenciennes, France, May 17, 2017. REUTERS/Benoit Tessier - RTX369IX

The $80 million research and development facility provides free technical training for workers in the state.

“Our job is to make sure that all Alabama companies have the best skilled workforce possible,” Maroney said.

According to A3, 80 percent of manufacturers say they’re having a hard time finding qualified applicants for skilled production positions. The Alabama program and similar investments in worker training are intended to help American manufacturers adapt to an industry that is becoming increasingly high-skilled and high-tech.

“Like a blue collar job, it’s something that you learn over time,” said Scott Blanck, who founded Start Code, an Atlanta-based computer programming lab for children. “You start with it. But then you get better at your craft as you go along. Because really this field is constantly changing. You’ve always got something new to learn.”

Industry leaders are looking to robots as the most efficient way for American factories to compete with cheap labor overseas. (AP)

Blanck, who grew up in a blue collar family, tries to dispel popular stereotypes of coding as an activity reserved for Silicon Valley entrepreneurs or lone office nerds. In fact, Blanck sees parallels between the computer networks he’s managed and the pumps and compressors his father maintained in the mine in northern Michigan where he worked.

“At one point I realized, wow, I’m doing my dad’s job,” Blanck said. “We’re a generation later and the technology is different. But the ideas are still there. The ideas still matter.”