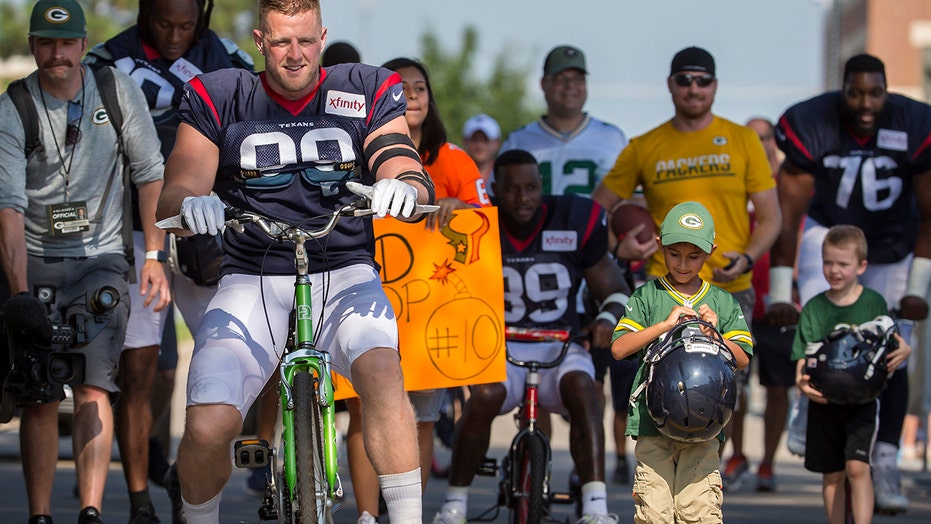 Watt, a Wisconsin native, had dreamed of one day being able to pick out a child’s bike and ride it to the practice field.

He probably didn’t imagine breaking the seat off the small bike, though. He told reporters that the bicycle was not meant for a 288-pound defensive lineman to ride.

“The bike that I was using was not equipped for a 290-pound man, and the seat broke off,” Watt said. “I've purchased a new bike for the boy. I apologize for that.”

Luckily, DeAndre Hopkins came in at the last minute to save the day and gave Watt a bigger bike to ride. Watt said the whole experience was great “until I broke the bike.”

“It's one of the coolest traditions,” he said, according to ESPN. “Growing up here, I know how special it is to get to interact with a player from the Green Bay Packers. For them to have that tradition, where kids get to be up close and personal with their favorite players and they get to hold their helmet. I mean, that's what it's all about. Those are the memories that those kids are going to have for a lifetime. For me to be able to participate in it as a player was cool.”

Watt would end up leaving practice early after tweaking his groin. He doesn’t think he’ll play in Thursday’s preseason game against the Packers.

“I doubt that they'll let me out there,” he said. “But regardless, it's going to be cool to go out in Lambeau Field and step on the grass and see the fans and just to live that moment. Like I've said all along, it was a dream of mine as a kid, so it's going to be pretty cool whether I'm playing or not.”