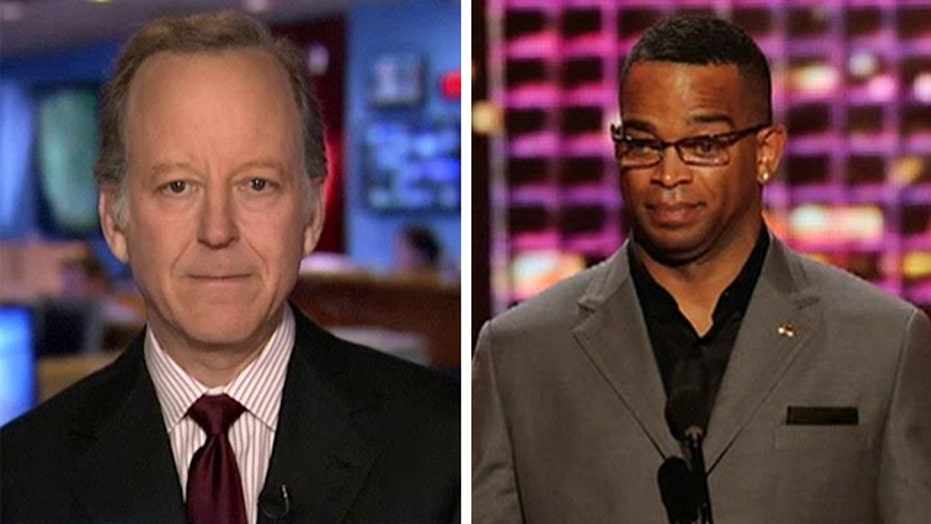 SportsCenter anchor Stuart Scott, known for his quirky catch phrases such as “Boo-ya” and “As cool as the other side of the pillow"-- which enthralled viewers for decades -- died Sunday after a battle with cancer, ESPN says. He was 49.

Scott died after going through several surgeries, chemotherapy, radiation and clinical trials in his fight against cancer, the station said in a press release. He was diagnosed with cancer in 2007.

“ESPN and everyone in the sports world have lost a true friend and a uniquely inspirational figure in Stuart Scott,” said ESPN president John Skipper.  “Who engages in mixed martial arts training in the midst of chemotherapy treatments? Who leaves a hospital procedure to return to the set?  His energetic and unwavering devotion to his family and to his work while fighting the battle of his life left us in awe, and he leaves a void that can never be replaced.”

On Sunday morning, NFL Network broadcaster Rich Eisen's voice broke as he reported the death of his good friend, with whom he worked on "SportsCenter" broadcasts.

"I love this man," Eisen said.

Scott is survived by his two daughters -- Taelor, 19, and Sydni, 15 -- and his girlfriend, Kristin Spodobalski, in addition to his parents O. Ray and Jacqueline Scott; and his three siblings Stephen Scott, Synthia Kearney and Susan Scott.

“Taelor and Sydni, I love you guys more than I will ever be able to express,” Scott said in July while accepting the Jimmy V Perseverance Award at the ESPYs. “You two are my heartbeat. I am standing on this stage here tonight because of you.”

As he accepted the award named for former N.C. State coach Jim Valvano, who died of cancer in 1993, Scott noted: "When you die, that does not mean that you lose to cancer.

"You beat cancer by how you live, why you live, and the manner in which you live," Scott said. "So live. Live. Fight like hell."

"He didn't just push the envelope. He bulldozed it."

Scott joined ESPN in 1993 and became a top voice on the channel’s SportsCenter program, aided by his enthusiasm and colorful descriptions of sports stories.

He interviewed top figures inside and outside the world of sports, such as Tiger Woods, Michael Jordan, Denzel Washington and Presidents Barack Obama and Bill Clinton.

"Twenty years ago, Stu helped usher in a new way to talk about our favorite teams and the day's best plays," Obama said in a statement Sunday afternoon. "For much of those twenty years, public service and campaigns have kept me from my family - but wherever I went, I could flip on the TV and Stu and his colleagues on SportsCenter were there.  Over the years, he entertained us, and in the end, he inspired us - with courage and love.  Michelle and I offer our thoughts and prayers to his family, friends, and colleagues."

"Think about that phrase, 'As cool as the other side of the pillow.' It's a hot, stifling night. You're having trouble sleeping. But then you think to turn the pillow over, and, Wow, it's cool, and it feels so good,” said Jay Harris, a SportsCenter anchor who grew up watching and idolizing Scott.

"Well, that's who Stuart is. He is 'the other side of pillow,' the man who made sportscasting cool. God bless whoever it was who thought to rearrange the bedding at ESPN,” Harris added.

Scott covered major sporting events throughout his career, including the NBA Finals, the Super Bowl, MLB’s World Series and the NCAA Final Four. He also starred in several This Is SportsCenter commercials.

Fans and players at games around the United States on Sunday stopped to observe moments of silence, including at the Bengals-Colts NFL playoff game in Indianapolis, the Mavericks-Cavaliers NBA game in Cleveland and at several college basketball games.

Some of the world's most famous athletes expressed their grief online. LeBron James wrote on Instagram: "Thank you so much for being u and giving us inner city kids someone we could relate to that wasn't a player but was close enough to them."

"Stuart wasn't covering heroes & champions, it was the other way around," Tiger Woods said on Twitter.

Scott raised hundreds of thousands of dollars for organizations dedicated to fighting cancer, such as The V Foundation and Livestrong, and he participated in Stand Up To Cancer campaigns, ESPN says.

Scott graduated from the University of North Carolina in 1987 and worked at local stations in Orlando, Raleigh, North Carolina and Florence, South Carolina, before joining ESPN.