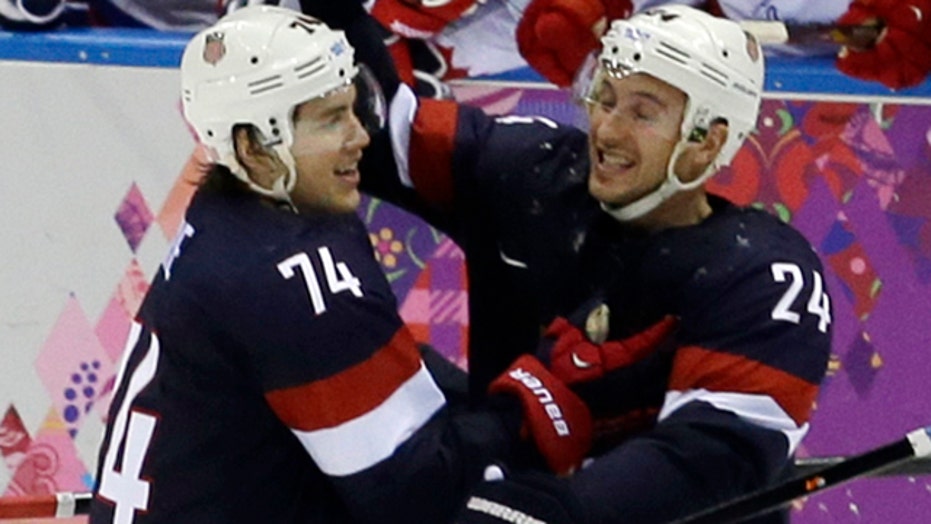 US hockey team echoes 'Miracle on Ice' in dramatic win

MOSCOW – After a heated U.S.-Russia hockey match at the Sochi Olympics on Saturday, many Russian spectators have decided the cold war is back -- and not just on the ice.

Demonstrators gathered in Moscow on Monday to protest a referee's call disallowing a Russian goal in the match that Russia ultimately lost in a penalty shootout.

The protesters, organized by the Kremlin party's youth group, donned Russian hockey jerseys and shouted, "Make soap out of the ref!" -- a common expression among Russian soccer fans.

Wielding a banner with a photograph of the American referee, Brad Meier, the protesters used a cheese grater to grate soap into buckets.

The goal, which would have given Russia to a 3-2 lead with less than five minutes on the clock, was disallowed after officials ruled that the net had come loose from the ice before the goal was scored. Russian fans, who had leapt to their feet in celebration, howled with rage as the call was announced.

The referee supervisor for the International Ice Hockey Federation, Konstantin Komissarov, confirmed that the ruling made by the referees was correct and that video review had been properly used to make the call. But that hasn't mollified Russian spectators who, in a rare unifying moment, have come together from both ends of the political spectrum to air their grievances -- and their conspiracy theories.

As the call was made, commentators on state television at first seemed unable to overcome their shock, shouting "How can this be so?!" They spent much of the rest of the game muttering resignedly about Meier's nationality.

Komsomolskaya Pravda, one of the country's most popular newspapers, carried a photograph of the American goalie -- a red circle drawn around his hand, which appears to be pushing one goal post backward -- beneath the headline: "An American referee and the puppet international federation deprived us of a deserved victory." One state-owned channel ran an hour-long talk show dedicated to the referee's call.

"Judges don't have nationality?!" Alexei Pushkov, a Kremlin-connected member of parliament, fumed on Twitter. "How interesting. And how come they didn't appoint a referee from Russia, but an American?"

Even Russia's liberals joined in the fight. "I agree with everything said about the referee," wrote corruption blogger and opposition activist Alexei Navalny. One liberal website, Lenta.ru, wrote that the "Jewish masonry" was clearly involved in the call, joking reference to Soviet-era conspiracy theories about the West.

President Vladimir Putin, who was one of the unhappy fans in the Sochi rink on Saturday, told Russian state news agencies on Monday that the game "should have been stopped" if the goal was out of place, but asked for fans to show sportsmanship.

"Even if the judge was wrong, we mustn't stick labels on anybody," he said. "We can't forget that sport takes courage, but also luck."