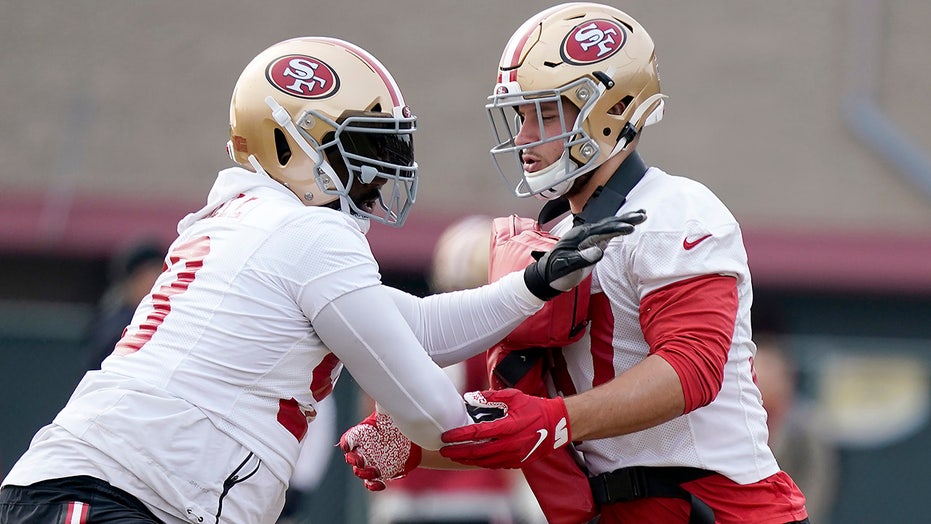 Nick Bosa remained on the turf with the wind knocked out of him after beating yet another offensive lineman for a sack when the appreciative San Francisco 49ers fans started chanting his name.

Bosa hopped up, jogged off the field and then quickly got back to doing what he's done for his entire rookie season by harassing quarterbacks and spoiling game plans for offenses around the league.

There are plenty of reasons for the remarkable turnaround in San Francisco that has the 49ers (14-3) ready to host the Green Bay Packers (14-3) in the NFC championship game on Sunday after winning only 10 games in the first two seasons under coach Kyle Shanahan and general manager John Lynch.

But perhaps no one has had a bigger impact than Bosa, a rookie who already has the physical tools and techniques of a player far more experienced.

"It was kind of shocking how silly he was able to make a lot of talented tackles look early, myself included," veteran left tackle Joe Staley said Wednesday. "Now it's just who he is and is what we expect now."

Bosa was born for this role as a disruptive defensive end. His father, John, was a first-round pick by Miami in 1987 who played three seasons in the NFL.

His older brother Joey was drafted third overall by the Chargers in 2016 before winning Defensive Rookie of the Year and recording 40 sacks in his first four seasons.

Nick Bosa was dominant as a rookie as well after being picked second overall last spring. His nine sacks were the fourth most ever for a 49ers rookie, and he ranked third in the NFL with 68 quarterback pressures, according to SportsInfo Solutions, trailing only Cameron Jordan and Danielle Hunter.

Bosa also has been disruptive against the run and even flashed the ability to play in pass coverage He dropped off last week and broke up a pass to Minnesota's Dalvin Cook.

"Obviously making the plays is good," Bosa said. "But, I mean, I try and bring the same effort, same technique, same everything every week. (Sunday) I got a couple sacks. That always helps. But most of the plays that I'm most proud of are the plays that weren't the sacks."

Bosa and the entire defensive line have been making plays all season. The four first-round draft picks the team spent on defensive linemen the past five seasons and the trade for another former first-rounder in Dee Ford are paying big dividends.

The Niners also made some schematic changes this season under new defensive line coach Kris Kocurek, lining up the defensive ends out wider than in the past to create better angles to get to the quarterback and more 1-on-1 matchups.

It has worked as advertised as the 49ers increased their sack total in the regular season from 36 to 48 and went from a record-low seven takeaways to 27 in large part because of the improved pass rush.

"Once we got the pads on in training camp, it was very eye-opening," quarterback Jimmy Garoppolo said about the upgraded line. "They made it difficult on us in training camp and it transferred over to the season, thankfully."

The defensive line took a little step backward late in the season when Ford played only four snaps in the final six games because of injuries.

But Ford's return against the Vikings last contributed to a six-sack performance as he drew extra attention with the threat of his speed rush to open opportunities for teammates.

Ford got one sack of his own to force a field goal late in the first half and even lined up next to Bosa at times, including on Bosa's first of two sacks in the game. That gave the line a new look for offenses that still have to deal with power rushers DeForest Buckner and Arik Armstead on the other side.

"I told Dee, 'I wish I could scare people with my presence like you do,'" Bosa said. "I mean, when a guard sees Dee Ford on them, their mind is racing, they're thinking about what he's about to do, whatever it is. Just having his presence and his pass-rush ability, his knowledge and communication, he's a true vet. It's nice to have him out there."

NOTES: All-Pro TE George Kittle missed practice with a sore ankle. Kittle hurt the ankle during the game Saturday but was walking around the locker room before practice without a noticeable limp. ... Ford got the day off from practice after missing time late in the season with a hamstring injury but is still slated to play. ... LB Kwon Alexander was limited after returning last week from a pectoral injury.