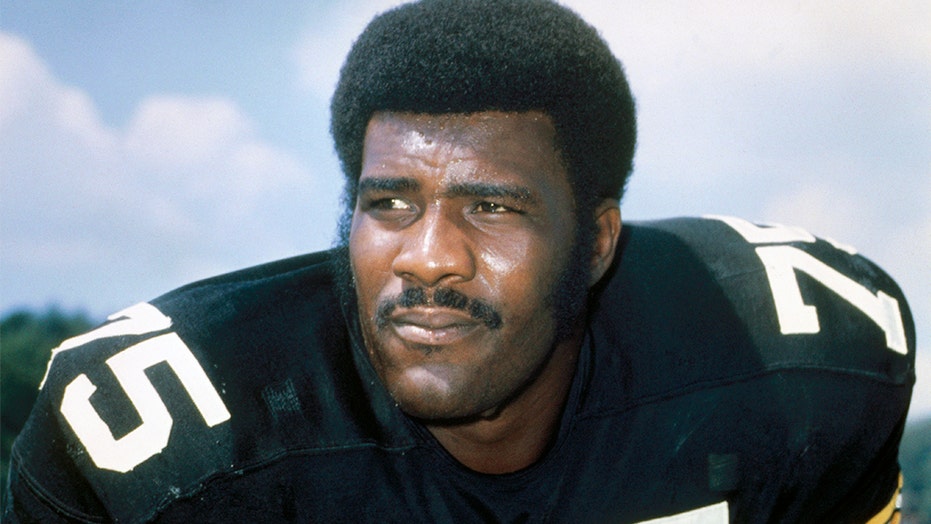 The Pittsburgh Steelers organization was founded in 1933, and it is the oldest franchise in the AFC. Since the 1970 merger, the Steelers have been one of the most successful teams in NFL history.

Pittsburgh is tied with the New England Patriots for the most Super Bowl titles (6), and they won eight AFC Championship games, which ties the Denver Broncos for second-most all-time victories.

When you're an all-time great franchise like the Steelers, it's hard to narrow it down to the four best players in team history.

So, when it comes down to the best of the best, which players can line up on the Mount Rushmore of Steelers? Read below for a list of the four greatest players the franchise has ever seen.

"Mean" Joe Greene is the best player in franchise history. (Photo by Focus on Sport/Getty Images)

"Mean" Joe Greene, a four-time Super Bowl champion with the Steelers, played with the team from 1969-1981. Considered to be the greatest defensive lineman in NFL history, Greene was the heart and soul of the defense nicknamed the "Steel Curtain," which led the Steelers to four Super Bowl titles in six years.

Greene, drafted by the Steelers with the No. 4 overall pick in the 1969 NFL Draft, was a 10-time Pro Bowler, eight-time All-Pro, which included five first-team selections, and he was a two-time NFL Defensive Player of the Year in 1972 and 1974.

A Defensive Rookie of the Year in 1969, Greene was a member of the NFL's '70s All-Decade Team, as well as the 75th and 100th Anniversary All-Time Teams. He was inducted into the Pro Football Hall of Fame in 1987, and his No. 75 jersey is retired by the Steelers.

Jack Lambert, an all-time great linebacker, played for the Steelers from 1974-84. (Photo by Focus on Sport/Getty Images)

Jack Lambert was the starting middle linebacker over an 11-year career with the Steelers. Lambert won four Super Bowl titles with the franchise and, according to the Pro Football Hall of Fame, Lambert was "the greatest linebacker of his era."

Lambert, the NFL's Defensive Player of the Year in 1976, was a nine-time Pro Bowler, eight-time All-Pro, six of which were first-team honors, and he was recognized as the Defensive Rookie of the Year when he entered the league in 1974.

Mel Blount is one of the greatest cornerbacks in NFL history. A four-time Super Bowl champion with the Steelers, Blount was a five-time Pro Bowler and six-time All-Pro selection. He finished his career with 57 interceptions and two touchdowns.

Blount, known for his physical style of play, was the NFL's Defensive Player of the Year in 1975, when he led the league with 11 interceptions. He had at least one interception in all 14 NFL seasons.

Blount, who was inducted into the Pro Football Hall of Fame in 1989, was a member of the NFL's '80s All-Decade Team, as well as the league's 75th and 100th Anniversary All-Time Teams.

Rod Woodson, a cornerback and safety, was the 1993 NFL Defensive Player of the Year. (Photo by George Gojkovich/Getty Images)

Rod Woodson, who played 10 years with the Steelers from 1987 to 1996, was an 11-time Pro Bowler and eight-time All-Pro selection, which included six first-team honors.

Woodson was the NFL's Defensive Player of the Year in 1993, and he led the league in interceptions twice (1999 and 2002). Woodson holds the NFL record for fumble recoveries (32) by a defensive player, and interceptions returned for a touchdown with 12. His 71 career interceptions are the third-most in league history.

Woodson was inducted into the Pro Football Hall of Fame in 2009. He was also a part of the Steelers' All-Time Team, the NFL's '90s All-Decade Team, and the 75th and 100th Anniversary All-Time Teams.