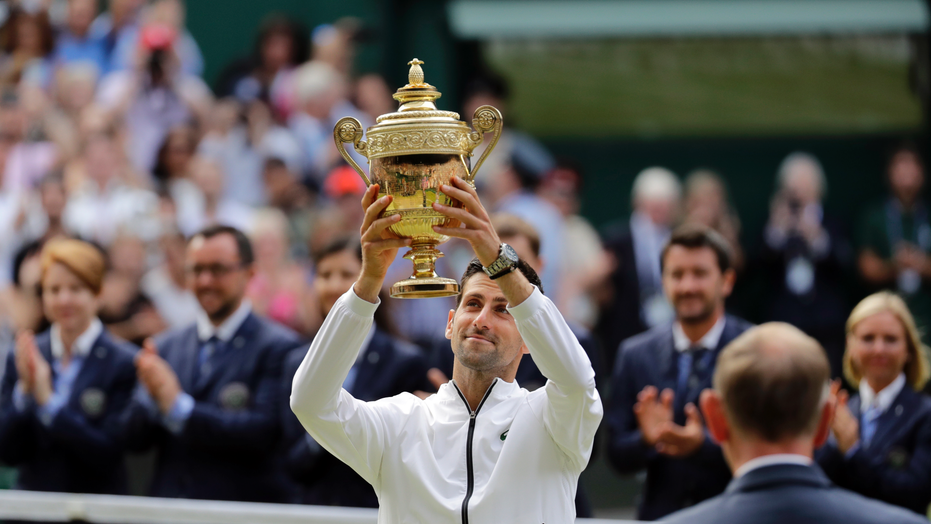 Novak Djokovic defended his Wimbledon title Sunday, defeating one of the game’s greatest players, Roger Federer, in an epic five-set match that was the longest final ever in history at the All England Club.

Djokovic looked stunned after Federer shanked a forehand on the last point, sending the ball skyward.

"Unfortunately in these kinds of matches one of the players has to lose," Djokovic said. "It's quite unreal."

Roger Federer is dejected after losing a point to Serbia's Novak Djokovic during the men's singles final match of the Wimbledon Tennis Championships in London, Sunday, July 14, 2019. (Adrian Dennis/Pool Photo via AP)

In the crucial 16th game of the final set, Djokovic survived two match points with Federer serving. He then broke Federer to keep the match going on the center court.

With the victory, Djokovic became the first man in 71 years to win Wimbledon after facing match points in the final.

"Definitely tough to have those chances," Federer said.

Djokovic has done this to him before.

In the semifinals of the 2010 and 2011 U.S. Opens, Djokovic erased two match points each time before coming back to win.

"It was a great match. It was long. It had everything. I had my chances. So did he. I thought we played some great tennis. In a way, I'm very happy with my performance, as well," Federer said during the trophy ceremony. "But Novak, it's great. Congratulations, man. That was crazy. Well done."

Sunday’s match was their third meeting at Wimbledon. Djokovic won both of the previous matchups, in 2014 and 2015.

Federer, 37, was going for his 21st Grand Slam trophy overall Sunday, while the 32-year-old Djokovic was playing for his 16th. Had Federer won, he would have been the oldest man to win a Grand Slam title in the professional era. Rafael Nadal, who lost to Federer in the semi-finals, owns 18 Grand Slam titles.

Djokovic and Federer had played each other 47 times previously with Djokovic holding a 25-22 head-to-head edge. Sunday was also their 16th showdown at a major — the most between any two men in the professional era — and Djokovic leads that count 9-6 so far.