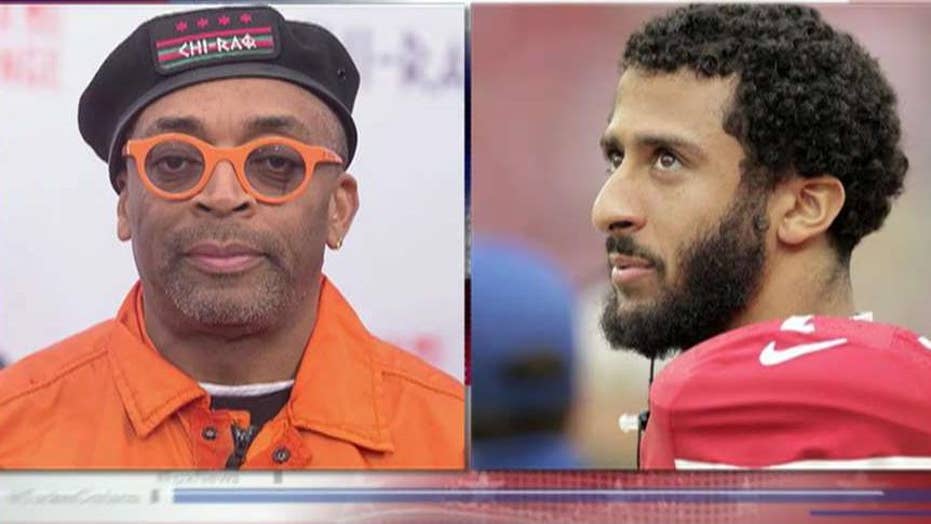 Fox Sports 1's Jason Whitlock sounds off on Colin Kaepernick supporter Spike Lee and why NFL teams are unwilling to take a chance on the controversial quarterback, calling the false racism narrative the 'Tawana Brawley' of sports

Those backers include the NAACP and current and former members of the New York City Police Department, including famed corruption fighter Frank Serpico.

Kaepernick has been struggling to find a new team since opting out of his contract after last season.

His backers say NFL team owners have blackballed Kaepernick because he staged a one-man protest last season on behalf of African-Americans and other minorities – by kneeling instead of standing for the national anthem before each week’s game.

But critics have said his refusal to stand for “The Star-Spangled Banner” has been disrespectful to the nation and its service members.

His supporters defended him Saturday.

The NAACP called for a boycott of NFL games until Kaepernick gets an equal opportunity at making a roster for the upcoming season.

“There will be no football in the state of Georgia if Colin Kaepernick is not on a training camp roster and given an opportunity to pursue his career,” Gerald Griggs of the Atlanta NAACP told Fox 5.

Riggs warned that if Kaepernick remains unsigned to a deal as of 5 p.m. Sept. 17, “We are going to have the world’s largest tailgate, and that tailgate will not go into Mercedes-Benz Stadium.” (Riggs was referring to the new $1.6 billion home of the NFL’s Atlanta Falcons.)

“We will take a knee, and we will continue to take a knee on the NFL until they act with one voice,” Riggs said.

The threat of a nationwide boycott is meant to send a message to NFL Commissioner Roger Goodell and the owners of the NFL’s 32 teams, Riggs said.

In New York, Serpico and other current and former NYPD officers wore T-shirts reading “#imwithkap” during a gathering in Brooklyn.

He's trying to hold up this government, up to our founding fathers," said Serpico, 81, who was portrayed by Al Pacino in the 1973 film, “Serpico.”

Sgt. Edwin Raymond spoke of the need for racial healing in the country.

"Until racism in America is no longer taboo, we own up to it, we admit it, we understand it and then we do what we have to do to solve it,” he said. “Unfortunately we're going to have these issues.”

Kaepernick has thrown for 72 touchdowns and more than 12,000 yards across six seasons with the 49ers.