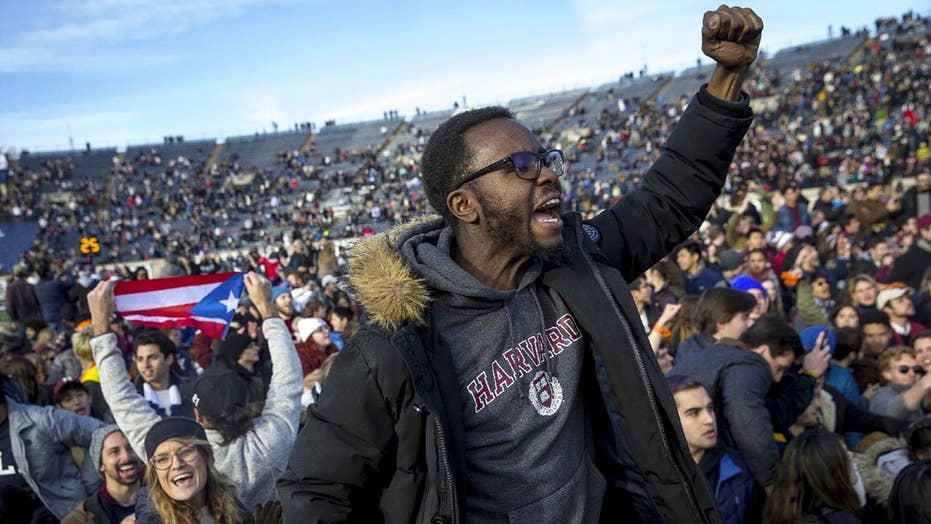 Harvard University student Christopher Colby discusses the interruption for climate activism and how cutting fossil fuels can ultimately be a disadvantage to college students.

A climate change protest at halftime of Harvard and Yale’s football game Saturday led to dozens of charges after the demonstration delayed the game.

Officials said 42 people were charged with disorderly conduct due to the protest, during which students and alumni from both schools occupied midfield of the Yale Bowl during halftime. Some held signs demanding that Ivy League schools divest from the fossil fuel industry. Others had signs that raised issues about Puerto Rican debt and the treatment of the Uighurs of China.

Harvard and Yale students protest during halftime of the NCAA college football game between Harvard and Yale at the Yale Bowl in New Haven, Conn., on Nov. 23, 2019. (Nic Antaya/The Boston Globe via AP)

Most of the demonstrators walked off after about an hour but those who remained were charged with misdemeanor disorderly conduct and issued a court summons, Yale University said in a statement. Actor Sam Waterson was among those arrested.

Yale officials said in a statement given to reporters in the press box at the game that the school “stands firmly for the fight to free expression.”

“It is regrettable that the orchestrated protest came during a time when fellow students were participating in a collegiate career-defining contest and an annual tradition when thousands gather from around the world to enjoy and celebrate the storied traditions of both football programs and universities,” the statement said.

Rachel Sadoff, a junior at Harvard, told the Associated Press about 150 students planned to participate and about 100 more who were in the stands joined in. She said organizers considered the protest a success.

“Our goal was to spread the word,” Sadoff said. “If more people speak up, our colleges will have to listen.”

“This is an absolutely thrilling experience, and we’re very excited about the support that it garnered from all over,” Carlson-White said.

Chuck Crummie, 68, who attended the game with his son expressed his displeasure with the protest. According to The Washington Post, his son is a former Yale football player.

“They’re all supposed to be intelligent people. It looks like there’s a lot of common sense that has missed their generation,” Crummie said. “It goes to show that this generation is all about themselves and not a football game.”

In this Saturday, Nov. 23, 2019, photo, Harvard and Yale students protest during halftime of the NCAA college football game between Harvard and Yale at the Yale Bowl in New Haven, Conn. Officials say 42 people were charged with disorderly conduct after the protest interrupted the game. (Nic Antaya/The Boston Globe via AP)

Yale went on to win the game 50-43. With the victory, the Bulldogs clinched a share of the Ivy League championship.