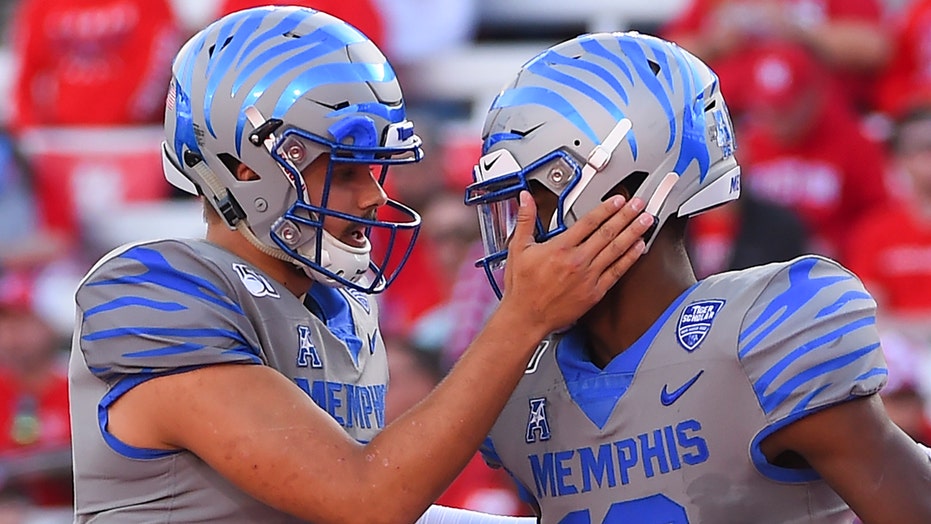 The latest College Football Playoff rankings drew scrutiny from the American Athletic Conference commissioner on Wednesday over what he called a double standard.

Michael Aresco said he believed that Power 5 Conference schools – the ACC Big 12, Big Ten, SEC, Pac-12 – get more “credit” for things the AAC gets overlooked for.

“It seems to me, that the [Power 5] teams get credit for things that we don’t get credit for,” he told the Orlando Sentinel. “I think there’s a double standard here because when you’re the strongest [Group of 5] conference, how come your top teams aren’t ranked ahead of teams from conferences where the strength of schedule isn’t as great?”

He added: “If we’re clearly the best [Group of 5] conference, why wouldn’t we be ranked above all one-loss teams in the [Group of 5]?”

South Florida's Bryce Miller is wrapped up by Cincinnati defenders during the second half of an NCAA college football game, Saturday, Nov. 16, 2019, in Tampa, Fla. Cincinnati won 20-17. (AP Photo/Mike Carlson)

The AAC -- along with Conference USA, Mid-American Conference, Mountain West, and Sun Belt -- are part of the Group of 5 leagues. The highest-ranked Group of 5 leagues school is Memphis, which is No. 18 and 9-1 on the season. Cincinnati is ranked No. 19 and ranked 9-1 on the season as well. Boise State, Appalachian State, and SMU are among the other non-Power 5 schools in the committee’s top 25.

Aresco, who stressed he wasn’t attacking the committee members but questioned their methodology, touted the conference’s strength of schedule.

“We’ve beaten a couple of top-25 teams. We’ve played the toughest schedule by far while playing games at Oklahoma, at Ohio State, at Auburn, at Michigan State, and at Notre Dame. We’ve played a brutal schedule,’ he told the paper. “From top to bottom, we’ve never been better.”

The highest-ranked team in the Group of 5 leagues earns an automatic bid to a New Year’s bowl game. An AAC team has won three of the last four bowl games they’ve appeared in on New Year’s.

Memphis at this moment has the best chance of getting into one of those New Year’s bowl games. But the team has a tough game against Cincinnati coming up, which may ultimately determine each teams’ destiny.