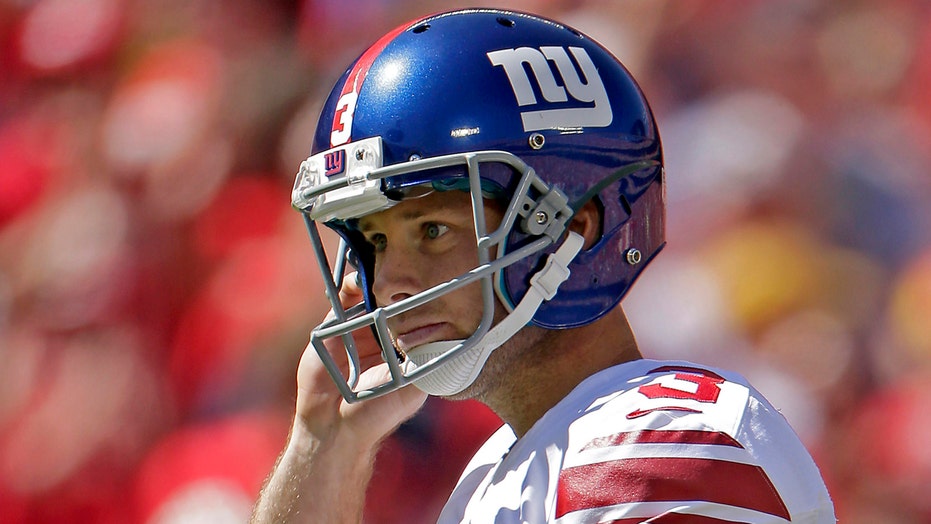 Josh Brown on abuse: Viewed myself as God, wife was my slave

LONDON – The NFL placed Josh Brown on paid leave Friday hours after coach Ben McAdoo struggled to answer questions about how the New York Giants might discipline the kicker for abusing his wife.

In a letter to the 14-year veteran, NFL senior vice president of labor policy Adolpho Birch said Brown was being placed on the league's "exempt list" while the league investigates whether he should be suspended as punishment for several alleged acts of spousal abuse. Birch said the move "does not represent a finding that you have violated the personal conduct policy," but does pave the way toward potential further sanctions.

Being placed on Commissioner Roger Goodell's "exempt" list means Brown cannot attend practices or Giants games but can go to Giants headquarters for meetings and workouts. It also means Brown continues to be paid and his presence won't be counted on the Giants' 53-man roster. Brown could appeal the decision.

"The NFL has the ability to place a player on the exempt list and the player has the right to appeal that decision, if he chooses," the NFL Players Association said in a statement. "The League office wanted unilateral control of this process and accordingly, their system lacks transparency."

The action on Brown came hours after McAdoo had trouble explaining the Giants' intentions toward Brown, their kicker since 2013. The questions about how much the Giants knew about Brown's off-field troubles have overshadowed preparations for Sunday's game in London against the Los Angeles Rams.

Brown did not travel to London following Wednesday's release of police records which contained the player's written admissions that he physically abused his wife, Molly, over a protracted period. She told police in the documents released by the King County Sheriff's Office in Washington state that the abuse and other threatening behavior stretched from 2009, when she was pregnant with their daughter, to the Pro Bowl in January 2016.

In May 2015, Molly Brown sought and was granted a temporary protection order against her husband. A King County Superior Court commissioner issued the temporary restraining order on May 27, 2015. The order was reissued several times until July 24, 2015 when the order was terminated by the court at Molly Brown's request.

At the Pro Bowl in Honolulu, Brown's wife said she called NFL security to move her and her three children to another hotel to avoid harassment from her estranged husband. She said he had pounded on their hotel door seeking to get in. The allegation is included in the final report filed last month by the local investigating detective, Robin Ostrum.

Brown's former wife did not respond to messages seeking comment from The Associated Press. A law firm representing the kicker declined to comment.

When asked whether the Giants knew about Brown's behavior at the Pro Bowl, McAdoo repeatedly said the Giants were still gathering information on the 9-month-old event. Finally, he said: "I'm not going to answer that."

When a reporter asked McAdoo about his comments in August suggesting he would show no tolerance for players abusive of their family members, McAdoo said his comments then were more nuanced.

"When did I say zero tolerance?" he said, adding: "I do not support domestic violence, if that's what you're asking. I do not condone it."

McAdoo described Brown as a "man of faith" who was trying to improve his behavior and the Giants organization was supporting him in this. But when asked to explain how the Giants provided this or monitored his off-field behavior, McAdoo said he couldn't detail any specific acts of support.

The NFL's official policy is to suspend players guilty of domestic abuse for six games on their first offense. Brown was suspended for one game, the Giants' season-opening victory over the Dallas Cowboys, in punishment for his May 2015 arrest at his family home in Woodinville, Washington, on suspicion of assaulting his wife by grabbing one of her wrists as she tried to reach for a phone, leaving an abrasion and bruising. No charges were filed but the detective, Ostrum, gathered detailed statements from Molly Brown who also provided her husband's written admissions of abuse in diary and email entries.

The NFL said its investigators asked to see these records but were denied.

Earlier Friday, Goodell suggested in a BBC interview that Brown could face further punishment now that league officials can see the full King County evidence file detailing Molly Brown's allegations of more than 20 episodes of abuse and other threatening behavior to herself, her two sons from a previous relationship and the couple's daughter.

"We have asked repeatedly for those facts and the information that's been gathered by law enforcement both orally and in writing. And we weren't able to get access to it. So you have to make decisions on whatever information you have," Goodell said in a transcript of the London interview provided by the BBC.

"We take this issue incredibly seriously. ... When it happens we're not going to tolerate it. So we have some new information here, we'll evaluate that in the context of our policy and we'll take it from there," Goodell said.

The Giants in April re-signed Brown to a two-year contract valued at $4 million. When facing his one-game suspension, Brown in August said he was divorced from his wife, although police documents released Wednesday suggested that civil proceedings remain incomplete.

The Giants have signed kicker Robbie Gould, an 11-year veteran of the Chicago Bears who was cut in September for salary cap reasons. The 34-year-old is expected to practice with the team Saturday.

"I've seen him (Gould) make a lot of kicks against me in the past. He's been successful, and we're hoping that continues," McAdoo said.