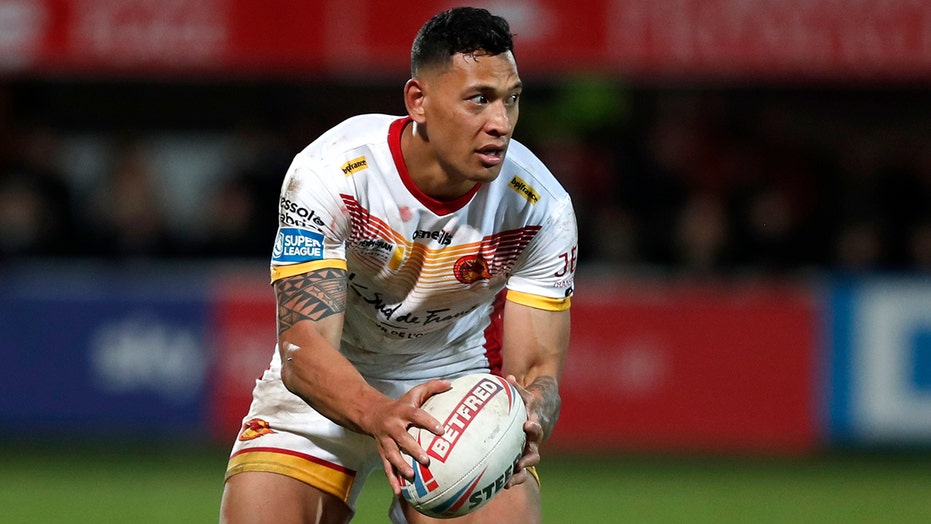 As Israel Folau made a try-scoring debut for his new club Catalan Dragons on Saturday, a man watching from the stands was told to remove a rainbow flag unfurled in support of the LGBT movement.

Folau has been widely condemned for posting homophobic comments on social media. It led to Folau — a former try-scoring star with Australia's rugby union national team — being fired by Rugby Australia last year.

He was then hired by the Dragons. But the rugby league side, based in southern France, has faced a strong backlash for handing him a 12-month deal.

The security official asking the man to remove the flag - which was draped over a railing - appeared to suggest it was covering up a portion of an advertising hoarding, high up in the stands.

The rainbow flag is used as a symbol of the LGBT movement and promotes social equality.

A woman who said she attended Saturday's game with the flag said that she was twice asked to remove it.

Alison Grey tweeted: “Firstly as I was told it was against health and safety. Secondly because it is against club policy.”

The Dragons later issued a statement saying it was not club policy and they would look into the matter.

It read: “Rainbow flags are not banned at our club. It is not forbidden. We are gathering more information about what happened.”

Folau was left out of the squad for a match at Wakefield Trinity last weekend, but was given a friendly reception at the 10,500-capacity Stade Gilbert-Brutus in Perpignan. Young fans posed for photos with Folau afterward. He scored the team's first try early on in a 36-18 win.

The Dragons' chairman, Bernard Guasch, has said his club does not agree with Folau's views and that it signed an agreement with the Rugby Football League that any transgression by him will immediately terminate his contract.

“Is he a good person? Is he a good player? Will he add value to the team, on and off the field, not judging on any political or religious belief that he’s got?" McNamara said. "We will not repeat anything that we’ve (already) said, whether you (the media) like that or not ... We’ve said quite clearly we don’t agree with (Folau's views). We’ve said that. Well, that’s it.”

In an Instagram post in April that caused widespread outrage and led to his firing, Folau condemned "drunks, homosexuals" and warned "hell awaits" them. He was fired before reaching an out-of-court settlement with the organization in December.

In November, Folau linked the bushfires that have devastated Australia as God’s punishment for legalizing same-sex marriage and abortion.

James Maloney, an Australian player with the Dragons, brushed aside any debate surrounding his countryman and new teammate Folau.

Maloney said he does not read or understand French newspapers, even though the Folau issue has grabbed widespread attention around the world on the same multi-language social networks Folau has posted on.

“I think that you guys (the media) make a bigger deal out of it than we do. He’s just another player that’s come in and fit into the squad," Maloney said after Saturday's game. "At least for me, personally, I don’t see the fuss. Because I can’t understand the news and I can’t read the newspapers. So I just look at my business.”

The arrival of Folau was fiercely opposed by the Super League, the Rugby League and the majority of clubs. It led to an agreement, during a recent meeting of clubs in Europe's Super League held in England, on how to deal with future signings.