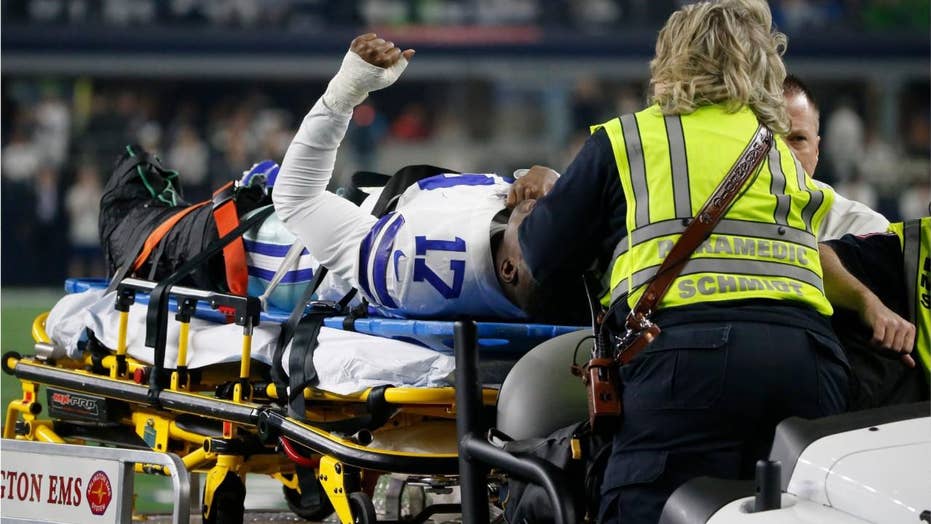 Dallas’ 24-22 over the Seattle Seahawks in the opening round of the NFL playoffs was marred by a gruesome injury to wide receiver Allen Hurns.

Hurns, who joined the Cowboys this season, was hurt in the opening quarter after making a 14-yard catch on third down.

The 27-year-old was being tackled to the ground by Seahawks safety Bradley McDougald when his left leg bent at an awkward angle.

In the immediate moments after the play, Hurns was seen punching the ground as he lay on the field. NFL on Fox announcer Joe Buck reacted in shock as the initial replay was shown. Footage of the injury was not shown again during the broadcast.

Play was brought to a halt for several minutes as medical staff treated Hurns on the field, before putting him on a stretcher and carting him off.

As he was on the turf, players from both sides attempted to comfort the receiver, and Cowboys coach Jason Garrett was seen kneeling next to his player and holding his hand.

As Hurns was taken off the field, the University of Miami product gave a thumbs up to the crowd.

Team owner Jerry Jones said after the game Hurns was set for surgery immediately after the game and the receiver dislocated his ankle and fractured his knee, according to USA Today.

The Cowboys were able to maintain their focus despite the injury, as Ezekiel Elliott rushed for 137 yards to help secure the win.

The win was the first in the playoffs for Elliott and quarterback Dak Prescott on their second try after losing a divisional game as rookies two years ago.

Dallas will play either New Orleans or the Los Angeles Rams in the divisional round next weekend.