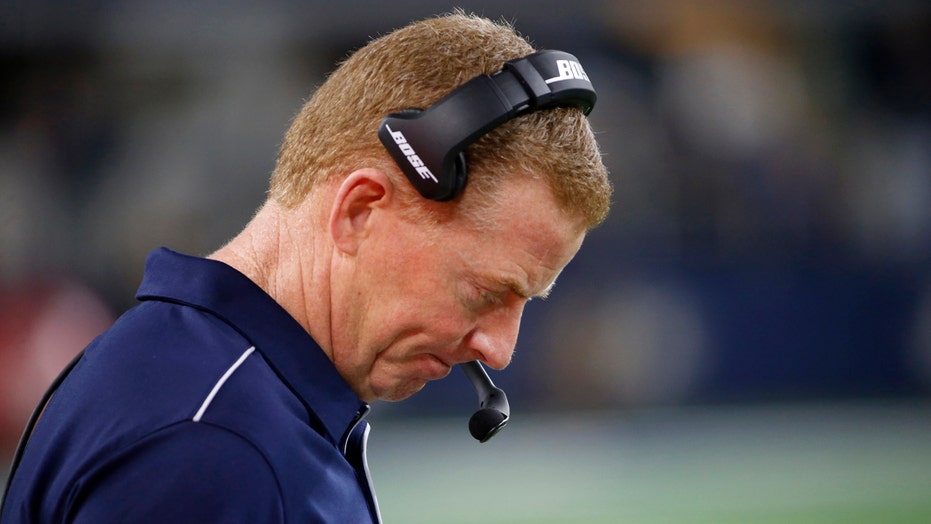 Dallas Cowboys’ owner Jerry Jones has all the faith in the world that head coach Jason Garrett will continue to coach in the league next year - he just isn’t saying if it will be in Dallas.

Jones said in an interview Tuesday that there isn’t a threshold or particular thing that Garrett must achieve this season in order to get an extension as head coach.

“There is no bar," he told KRLD radio. "When I say that I don’t mean that there’s not a level of-- a point where I determine it’s just not working or that I determine that it's working but there’s many things. There’s boxes to be checked.”

Buffalo Bills quarterback Josh Allen (17) fights for a first down after recovering a fumbled snap as Dallas Cowboys cornerback Byron Jones (31) defends in the first half of an NFL football game in Arlington, Texas, Thursday, Nov. 28, 2019.  (AP)

“The problem is you don’t know who can guarantee you a Super Bowl. I’ve seen a lot of coaches, I’ve seen their names mentioned but they can’t guarantee me a Superbowl or guarantee my players the Superbowl.”

He continued: “There’s no exclusive, nobody’s got the exclusive skills to get the job done so that collectively you can win a Superbowl but they’re qualified people. Jason Garrett is one of them and in my opinion, Jason Garrett will be coaching in the NFL next year.”

Jones’ elusive wording has added to rumors that Garrett will likely get axed if the Cowboys don’t take home a championship-- something that seems increasingly unlikely with a 6-6 record going into week 14.

Garrett was named head coach in 2010 after serving as offensive coordinator for the Cowboys for three years.