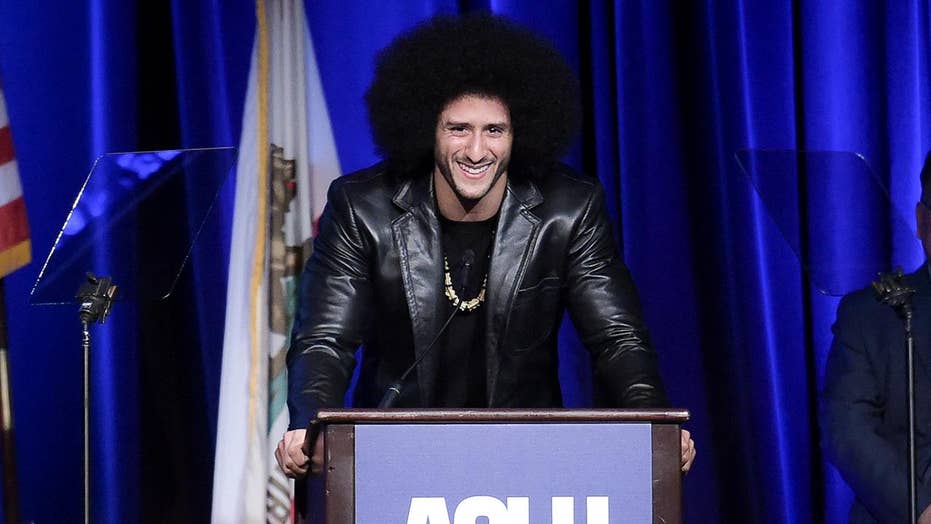 Controversial ex-quarterback Colin Kaepernick was in Beverly Hills on Sunday to accept the ACLU award for his advocacy, including starting the contentious trend of protesting during the national anthem -- an act that continues to divide fans and drain stadiums.

"We all have an obligation no matter the risk, and regardless of reward, to stand up for our fellow men and women who are being oppressed with the understanding that human rights cannot be compromised," Kaepernick told attendees.

“He has lost his job, one that he loved and was supremely talented and skilled at,” Hector Villagra said.

Kaepernick began his signature kneeling demonstrations during the playing of "The Star-Spangled Banner" during the 2016 preseason to raise awareness for social issues such as racial inequality and police brutality. He has not signed with any team this year as a free agent.

The protests from additional players have drawn steady criticism from President Trump. While the players have noted they're kneeling to protest racism and police brutality, Trump has contended the act is disrespectful.

TRUMP: AMERICA IS 'FED UP' WITH NFL NATIONAL ANTHEM PROTESTS

Recently, the president tweeted: "The American public is fed up with the disrespect the NFL is paying to our Country, our Flag and our National Anthem. Weak and out of control!"

Trump has branded the league as "weak" for not requiring players to stand during "The Star-Spangled Banner," and the player protests have seemed to contribute to lower attendance and fewer TV viewers this season.

While the NFL told NBC News last week attendance is down just 1 percent from last year, television ratings have slid and empty seats can be seen at many games.

The Baltimore Ravens, who sold out every home game since arriving in the city in 1996, had to advertise tickets for Sunday’s game, The Baltimore Sun reported.

Thousands of fans tried to resell their tickets to the game against the Detroit Lions, with seats available in almost every section, according to the newspaper. The Sun reported a fan could score an $80 ticket for an upper end zone seat for just $29.

HEY, NFL OWNERS, TIRED OF HALF-EMPTY STADIUMS? THIS ISN’T HARD. TELL YOUR PLAYERS TO STAND UP FOR AMERICA

The NFL last week said in a memo obtained by the Associated Press it was committing $90 million over the next seven years to social justice causes in a three-segment plan that involves league players.