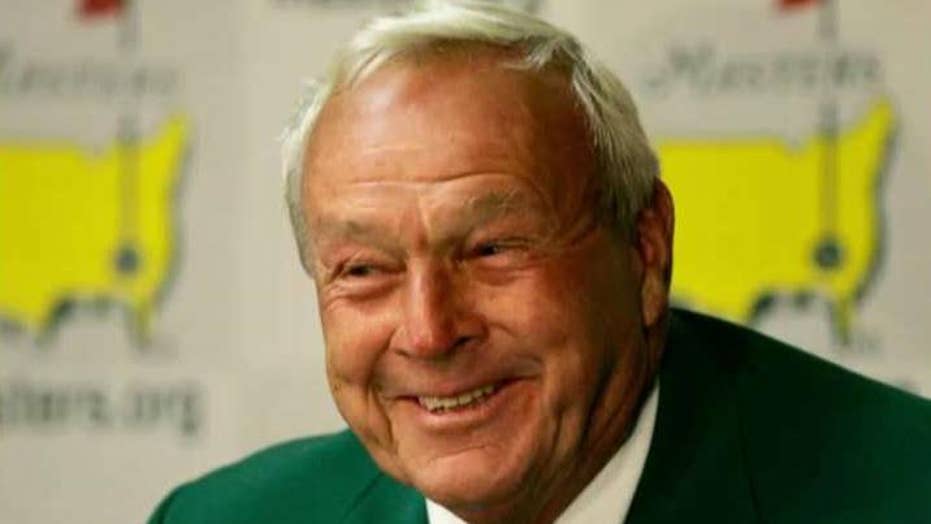 Palmer died in his home

Arnold Palmer, one of the greatest golfers ever to pick up a club and the object of a massive fan base that called itself “Arnie’s Army” as he recorded seven major victories, died Sunday at 87 in Pittsburgh, according to the United States Golf Association.

Alastair Johnson, CEO of Arnold Palmer Enterprises, told the Associated Press that Palmer died Sunday afternoon of complications from heart problems. Johnson said Palmer was admitted to the hospital Thursday for some cardiovascular work and weakened over the last few days.

Born in Latrobe, Pa., Palmer’s endearing personality and skill on the links earned him the nickname “The King,” during a career whose beginning coincided with the birth of television sports. Along the way, he became one of the wealthiest celebrity endorsers, a philanthropist, golf course designer and pilot.

Palmer’s long string of victories on the PGA tour began in 1955, and he became one of the sport’s most recognizable personalities, along with Jack Nicklaus. Palmer’s charismatic personality also made him a sought after pitchman, for several products, perhaps most famously Quaker State motor oil.

"Arnold Palmer was the everyday man's hero," Nicklaus said. "From the modest upbringing, Arnold embodied the hard-working strength of America."

Palmer’s importance to subsequent generations of golfers was evident Sunday, as tributes poured in via social media.

“Such sad news to hear about passing of #arnoldpalmer,” tweeted superstar Ernie Els. “Great memories of him. His legacy in the game & charity will live forever.”

John Daly tweeted: The Legends of all Legends in the game of golf! RIP my friend, always loved u and always will! God Bless my Friend! “

Republican presidential nominee Donald Trump reacted to the news of Palmer's death, calling it "really sad news" in a tweet.

"Really sad news: The great Arnold Palmer, the "King," has died. There was no-one like him - a true champion! He will be truly missed," he tweeted.

George W. Bush said in a statement: "For all who love the game of golf and love to see it played, there has never been a sight quite like Arnold Palmer walking down the fairway toward the 18th green. The announcer Vin Scully once said, 'In a sport that was high society, Arnold Palmer made it 'High Noon.' Laura and I are saddened by Arnie's death and send our sincere condolences to his family, friends, and fellow fans. He was a great American whose friendship - and swing thoughts - will be missed."

Palmer won the PGA Tour Lifetime Achievement Award in 1998, and in 1974 was one of the 13 original inductees into the World Golf Hall of Fame.

Palmer learned to play from his father, Milfred "Deacon" Palmer, who the club pro and greenskeeper at Latrobe Country Club. It was ten that he developed his trademark pigeon-toed putting stance.

He earned a scholarship to Wake Forest, but left to join the U.S. Coast Guard in the late 1940s. He returned to school three years later, and won the 1954 U.S. Amateur championship.

Palmer turned pro a year later, winning the1955 Canadian Open the first of a string of championships. Three years later, he won the Masters Tournament, cementing his place among the sport’s greats.

Palmer won 62 titles on the PGA Tour, with the final one coming in the 1973 Bob Hope Desert Classic. Among his wins were four at the Masters, two at the British Open and one at the U.S. Open. He finished second in the U.S. Open four times, was runner-up three times in the PGA Championship.

Palmer’s best years were in the early 1960s, but he remained an immensely popular figure for the rest of his life. In 2000, Golf Digest raked him the sixth greatest player of all time. Although his biggest purse, $50,000, came when he won the Westchester Classic in 1971, Palmer’s popularity allowed him to earn as much as $30 million per year in endorsements and business deals as recently as a few years ago.

During his heyday and well beyond, Palmer was a friend and sometimes golf partner with Presidents Eisenhower, Nixon and both Bushes.

Palmer was awarded the Presidential Medal of Freedom in 2004 and the Congressional Gold Medal in 2009.

Palmer’s friendly and folksy manner made him a favorite of the press, and his quips and quotes were as legendary as his short game.

"I have a tip that will take five strokes off anyone's golf game. It's called an eraser,” Palmer once said.

From former House Speaker John Boehner, R-Ohio, an avid golfer, said Palmer "struck his way into history and our hearts"

"Arnold Palmer was a model of integrity, passion, and commitment," he said late Sunday.

When Boehner was Speaker, he presided over a ceremony in the Capitol Rotunda bestowing Palmer with the Congressional Gold Medal in 2012.

"Arnold, you've struck our hearts and our minds, and today your government, your fellow citizens are going to strike a gold medal for you," he said at the point.

Palmer said he was "particularly proud of anything the House and Senate could agree on."

Palmer was diagnosed with prostate cancer in 1997, which was caught early. He returned to golf a few months later, winking at fans as he waded through the gallery, always a smile and a signature for them.

"I'm not interested in being a hero," Palmer said, implying that too much was made about his return from cancer. "I just want to play some golf."