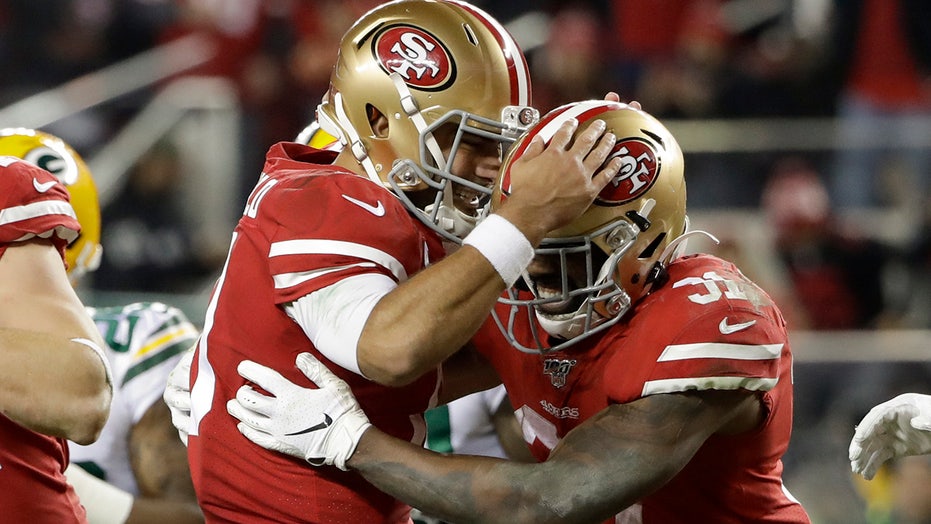 The San Francisco 49ers defeated the Green Bay Packers, 37-20, on Sunday to win the NFC Championship.

The 49ers will meet the Kansas City Chiefs at Hard Rock Stadium in Miami Gardens, Fla., next month for a chance to claim the title of NFL champions.

It was on the back of Raheem Mostert that the 49ers were able to defeat the Packers. Mostert had a breakout performance: 220 rushing yards on 29 carries with four rushing touchdowns.

The San Francisco 49ers celebrating during the first half of the NFC Championship game Sunday. (AP Photo/Marcio Jose Sanchez)

Mostert set a team record for most rushing yards in a playoff game, a record that quarterback Colin Kaepernick previously held.

The running back was so dominant that 49ers quarterback Jimmy Garoppolo had to throw the ball only eight times. He was 6-for-8 with 77 passing yards.

The 49ers’ defense was dominant for most of the game. The Packers failed to score a single point in the first half of the game. They forced Aaron Rodgers to throw two interceptions and fumble the ball three times, losing one of them early in the game.

Rodgers finished 31-for-39 with 326 passing yards and two touchdown passes. One pass was to running back Aaron Jones and the other was to tight end Jace Sternberger. Jones also had a rushing touchdown to go along with his 56 rushing yards.

But, the Packers had no answer for Mostert. He scored three times in the first half and put the finishing touches on the game with a 22-yard scamper for the final nail in the coffin for San Francisco.

The 49ers will play for a championship for the first time since the 2012 season. Kaepernick led the Niners against the Baltimore Ravens, but lost that game 34-31.

San Francisco last won the NFL championship in the 1994 season when Steve Young and Jerry Rice were leading the offense.