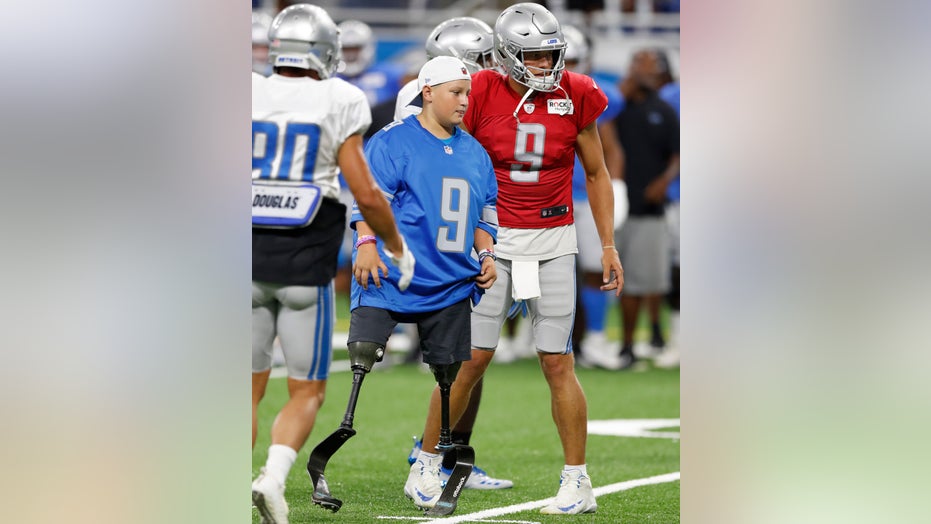 The Detroit Lions called in a special quarterback to lead the offense for one play during their intrasquad scrimmage Friday at Ford Field, where he touched the hearts of both temporary teammates and fans after delivering a perfect pass for a touchdown.

Quarterback Matthew Stafford normally leads the Lions in the huddle, but that changed when he surprised 14-year-old Calder Hodge, who calls Stafford his favorite player, with an opportunity to take a snap for himself.

Hodge, a Texas native like Stafford, was born with fibular hemimelia, a birth defect that left his body without tibia bones in his legs. His legs were amputated when he was three years old and his mission is to be the first double amputee quarterback to play in the NFL, according to ESPN. He's able to play thanks to two prosthetics called "C-Leg," which is a computerized knee that helps with stability. He jokingly says he's faster than Patriots quarterback Tom Brady.

"[I'm] a little faster, Hodge said. "You can quote me as saying that, actually."

Hodge had expected to just hang out on the sidelines at the scrimmage, but got a surprise when he was called in to join the offense.

“They were walking me over to the sidelines so I could watch the quarterbacks warm up and Matthew Stafford called me over and it just all happened,” Hodge told ESPN, “He said, all right, you want to throw a fade ball? And I said yeah.”

Hodge made the most of his moment, throwing a perfect fade route to wide receiver Marvin Jones in the back of the end zone.

"It was very emotional," Jones said. "First of all, it was very emotional when we saw his story. That's the type of heart that I want. He's very intense, and the first thing he said to everybody when he was here was, 'I love football. This is what I do.'"

After the play, the entire team surrounded Hodge and cheered him on like they won the Super Bowl.

“It was awesome, you know,” Stafford told ESPN. “But as cool as it was for him, it's just as cool or maybe cooler for us. He's getting to come out here and throw a touchdown pass to Marvin Jones, but just seeing what he's gone through in his life up to this point and how he's had such an amazing attitude and overcome so much, it's really kind of inspirational for us."

Lions head coach Matt Patricia told the team of Hodge's story before practice, where Hodge served as an honorary captain.

“I'm sure it's a big deal for him. But man, we watched a video about him today in our team meeting and it was incredible. It was cool to have him out here," Stafford added.

“It means the world,” Hodge told the outlet. “Now I have an actual chance to go out and fight for a starting job to fulfill my dream of playing football.”

Calder Hodge, 14, of Magnolia, Texas, prepares to run a play with Detroit Lions quarterback Matthew Stafford during an open practice at Ford Field on Friday. Hodge was born without tibia bones but that hasn't stopped him from chasing his dreams of becoming a quarterback. Hodge wants to be the first quarterback with prosthetics. (AP Photo/Carlos Osorio)

The teen's mother says football is a place for him to be normal and the game makes him feel equal to his classmates and peers because of how well he plays.

“For him, something that he has said a couple of times in the recent past is that [football is] his place to be normal, it’s his place to be an equal to the other kids that are playing," Calder's mother, Kayla Hodge said. "As he goes out onto the field, you might look at him and think he’s not going to be able to play football, but as soon as he throws the ball everybody knows that he’s a serious player, that he’s going to do exactly what they’re going to do and he’s going to put as much effort into the game as they do. And so he quickly becomes an equal on the field, and that’s something that’s really important to him is to be seen as an equal to everybody else."

Hodge won an honorary ESPY award last month for being an inspirational athlete and he's even had parents of amputee children reach out to him for advice.

"Don't hold back," he told one mother of an amputee child. "Let him do whatever he wants to do. Let him be the person he wants to be. Push him to do great things but never hold him back to do anything."