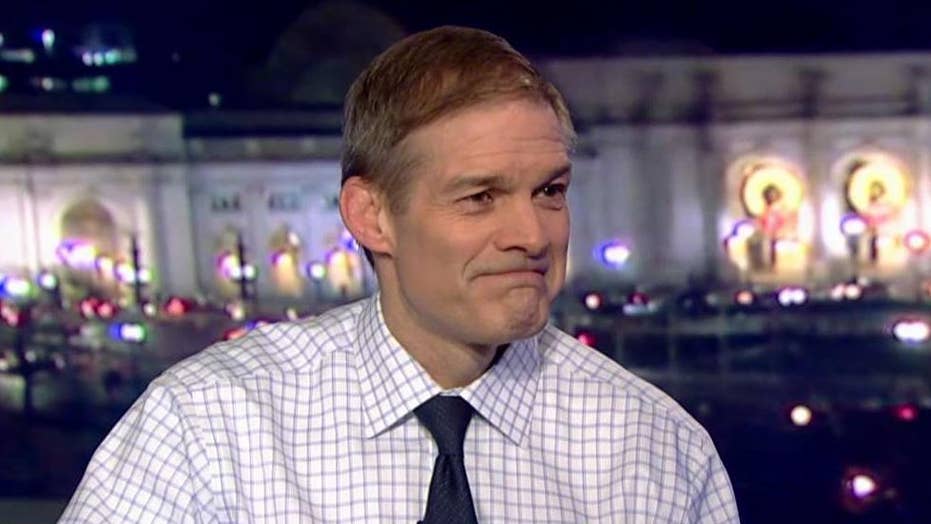 This is a rush transcript from "Special Report with Bret Baier," November 21, 2019. This copy may not be in its final form and may be updated.

BRET BAIER, ANCHOR: Let's go in-depth on these hearings. Joining us tonight, Ohio Republican Jim Jordan of the House Intelligence Committee. Thanks for being here.

REP. JIM JORDAN, R-OHIO: Good to be with you, Bret.

BAIER: What do you anticipate, next steps?

JORDAN: Who knows? They make the rules up as they go along, and they don't even follow those. So, I assume they send some kind of report to the Judiciary Committee. And then there will some kind of process -- or let's hope it's some kind of due process there. But I have, frankly, no idea because this has changed throughout. They were already doing depositions. Then they hold a vote -- which they couldn't even keep all their members on -- in line for. So, we'll just have to see what Pelosi and Schiff have in store for us next.

BAIER: Will you move over to Judiciary to do some of the questioning?

JORDAN: I'm already on there. So, I'm on the -- you know, Kevin -- when the leader put me over in Intel, I'm still on the Judiciary Committee and still on the Oversight Committee. So, I'll go --

BAIER: -- that it's going to come to an impeachment vote before the end of the year?

JORDAN: I do think that's the path they’re on. But again, you never know with these guys. I mean, this was the most unfair process I've ever seen. We weren't allowed to call the witnesses we want. The ones we wanted they ignored. The -- even today, they haven't even released all the depositions. So, there was certain testimony given in these depositions taken in the bunker in the basement of the Capitol that we couldn't even use in the open hearing. So, we'll just have to see. But I anticipate -- that's my best guess.

BAIER: Okay. I want to go to some of the substance.

BAIER: Today, for example, David Holmes was there to testify about this phone call --

BAIER: -- between Ambassador Sondland and the president of the United States. Take a listen. This is, first, Ambassador Taylor and then your questioning:

JORDAN: Why didn't your boss bring up the call?

DAVID HOLMES: When I did refer to the call in that meeting, that -- Ambassador Taylor nodded knowingly, as though he had been briefed on it.

JORDAN: That's not what I asked. I asked why he didn't share with us.

HOLMES: I refer to the call and everyone is nodding. Of course, that's what's going on. Of course, the president is pressing for a Biden investigation.

BAIER: I mean, you went down that road, and you get to this point where some -- a lot of these witnesses said that they came to the conclusion -- including Ambassador Sondland; he was 100 percent by September 8th that the aid was tied to the investigations of Burisma, Biden, and 2016.

JORDAN: Mr. Sondland said that there was an announcement that needed to be made by President Zelensky that they were going to do an investigation into Burisma and the Bidens. And before that, if that announcement is not made, they don't get the call; they don't get the meeting; they don't get the money. They got the call. They got the meeting. They got the security assistance dollars. And there was never an announcement from President Zelensky -- or frankly, for that matter, anyone else in Ukrainian government. So, this idea that there was a this-for-that, a quid for -- a quid pro quo -- did not happen. And yet, they continue to say, "Whoa, whoa, but this is impeachable." This is not about that at all, Bret. This is about -- they have never accepted the will of American people when 63 million Americans, in an Electoral College landslide, said, "We're going to send Donald Trump to Washington, shake that town up." And the establishment here -- and particularly the Democrats -- have never accepted that. And they're doing to do whatever it takes -- the Mueller Report, FBI investigation, dossier -- or now this -- whatever it takes to try to get him out; that's what this is really about.

BAIER: All right. Let me push you on a couple things.

BAIER: One is -- you buy that these professionals didn't tie Burisma to Biden? All these guys saying -- like Volker, and Sondland, Secretary Perry -- didn't tie that Burisma had to do with Joe Biden?

JORDAN: He was the definitive narrative of this.

JORDAN: In fact, he was the first witness that Adam Schiff called. And yet, his testimony has been the one that I think best tells this entire story, this entire episode, where there was never a quid pro quo. The aid ultimately got delivered. Sometimes these things get held up. We heard testimony from lots of people talking about that as well. So, it all worked out in the end. But you had a brand new president, new guy, never been in politics. Kind of similar to what we've got in this country with our president -- new guy, never been in politics, and we wanted to check him out. And people did for the 55 days that the aid was held. We checked this guy out. The vice president, Ambassador Bolton, U.S. senators, bipartisan U.S.senators went there and met with this guy, and they all come back and said this: He's the real deal. He's a reformer. Go ahead, release the dollars. And that's exactly what President Trump did.

BAIER: Right. Well, when Ambassador Sondland calls President Trump on September 9th, when that call happens, and the president has referenced it many times, "I want nothing. I want nothing. No quid pro quo," at the same time, the House Intelligence Committee launches this investigation based on the whistleblower. I mean, you don't see a coincidence there?

JORDAN: I don't. I don't. Because, like I said, you had the vice president, Vice President Pence met with this guy. You had the reforms they did in their parliament, their Rada, the reforms where they started this anti-corruption court, where they got rid of the former prosecutor. The reforms that were needed. Plus, you had a president, remember, Donald Trump's not a big, President Trump's not a big fan of foreign aid in the first place. He wants European countries to share more of the burden. He understood the corruption problem. Ernst and Young said Ukraine is one of the three most corrupt countries on the planet. Plus, he was concerned about influence in the 2016 election and things Ukrainian politicians were doing to encourage Hillary Clinton to win, helping Hillary Clinton win against President Trump. He was all that package and he said, "Oh, by the way, you got a new president." So, he said, "let's check this guy out." Well, we did. Everyone comes back and said, "All right, send the aid."

JORDAN: What I said yesterday is if it was a fair process, then you can ask us that question. But until this process gets any semblance of fairness, until we have some actual due process for the minority and more importantly, for the president of the United States, until we get to that, when we get those things done, maybe then we can talk about that. But that's the White House's call. But I see that the American people see how unfair this has been throughout. So that's the main thing we need is a fair process.

BAIER: You think that the president will be impeached?

JORDAN: In the House? Look, that vote a few weeks ago, I think was, you know, they got the numbers. But I think what was most telling about that vote a few weeks ago is two Democrats came over to our side. My guess is there'll be a few more Democrats come our way. Whether we can have enough to stop them from sending it to the Senate, I don't know. It doesn't look look promising, but let's hope so because putting the country through this is not healthy, particularly eleven months before the next election, based on an anonymous whistleblower with no firsthand knowledge bias against the president who worked with Joe Biden that we don't even get to bring in front of us. Have him put his hand up and swear under oath to tell the whole truth, nothing but the truth. See what kind of biases he has, what his motivation was for starting this whole thing. That's that's the part that bothers so many Americans, and why they know instinctively this is unfair.

BAIER: Last thing. Representative Will Hurd your colleague on the committee said he didn't like the call. He thought it was inappropriate. Can you get there?

JORDAN: No. I mean, look, President Trump has his own way of conducting business. I like the way he operates. I think the American people like a guy who comes here and has shaken this town up. And again, as I said, the facts are on the president's side, and the American people understand that this process has been totally unfair.

BAIER: Twitter question. Have you ever worn a jacket?

JORDAN: I have. You have to wear one on the floor of the House floor. And I always wear one when I'm around the president.