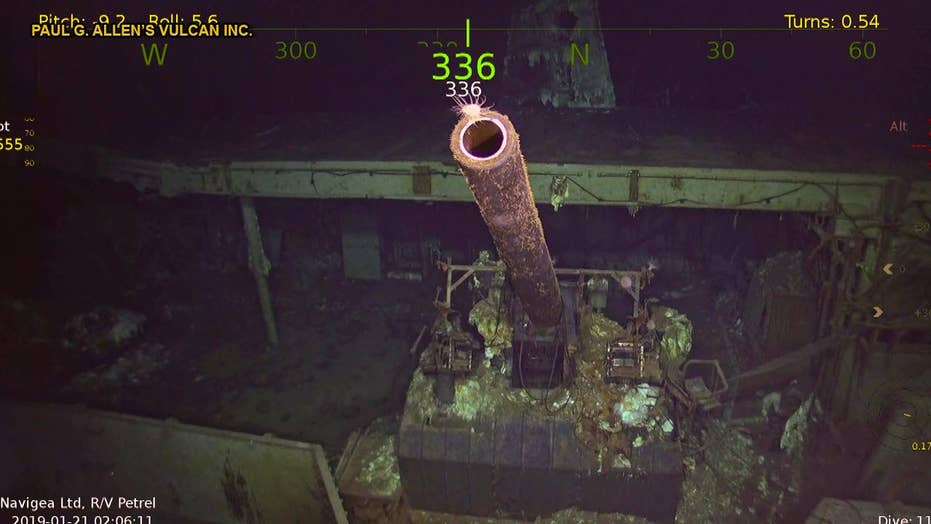 A World War II aircraft carrier, best known for taking part in the Doolittle raid on Japan in April 1942, the USS Hornet, has been discovered off the coast of the Soloman Islands in the South Pacific. The wreck was found at a depth of nearly 17,500 feet. Hornet was sunk during the brutal battle of the Santa Cruz Islands that raged from Oct. 25 to Oct. 27, 1942.

The wreck of the World War II aircraft carrier USS Hornet (CV-8) has been discovered off the Solomon Islands by a research organization set up by the late billionaire Paul Allen.

The carrier was located in late January by the crew of the Research Vessel Petrel resting on the floor of the South Pacific, according to a statement released by Allen’s Vulcan organization on Tuesday. Vulcan oversees Allen’s network of organizations and initiatives, which includes R/V Petrel’s research.

Researchers used information from national and naval archives to find the ship, as well as action reports from other vessels involved in the fateful Battle of the Santa Cruz Islands in 1942. The wreck was found at a depth of nearly 17,500 feet.

“Positions and sightings from nine other U.S. warships in the area were plotted on a chart to generate the starting point for the search grid,” explained Allen’s organization, in a statement. “In the case of Hornet, she was discovered on the first dive mission of Petrel's autonomous underwater vehicle and confirmed by video footage from the remotely operated vehicle.”

Hornet is best known for her role in the famous Doolittle raid on Japan in April 1942. The air attack was conceived in the wake of Pearl Harbor, according to the Naval History and Heritage Command, and was the first raid on the Japanese homeland by U.S. planes. While none of the 16 B-25 bombers launched from Hornet made it to their designated landing strip in China, the raid was an important boost to U.S. morale.

The aircraft carrier was also involved in the decisive battle of Midway in June 1942 when U.S. naval forces defeated a Japanese fleet.

Hornet was sunk during the brutal battle of the Santa Cruz Islands that raged from Oct. 25 to Oct. 27, 1942. After enduring relentless attacks from Japanese bombers and torpedo planes, Hornet’s crew was forced to abandon ship, Allen’s organization noted. Attempts to scuttle the carrier by the U.S. Navy were unsuccessful and it took four torpedoes launch by two Japanese destroyers to finally sink Hornet in the late evening of Oct. 26. Out of her crew of almost 2,200, 111 sailors lost their lives in the battle.

USS Enterprise, another Yorktown-class carrier, suffered extensive damage in the battle. “With the loss of Hornet and serious damage to Enterprise, the Battle of Santa Cruz was a Japanese victory, but at an extremely high cost," said Rear Admiral (Ret.) Samuel Cox, director of Naval History and Heritage Command, in a statement. "About half the Japanese aircraft engaged were shot down by greatly improved U.S. Navy anti-aircraft defenses. As a result, the Japanese carriers did not engage again in battle for almost another two years."

"We had Hornet on our list of WWII warships that we wanted to locate because of its place in history as an aircraft carrier that saw many pivotal moments in naval battles," said Robert Kraft, director of subsea operations for Vulcan, in a statement. "Paul Allen was particularly interested in historically significant and capital ships, so this mission and discovery honor his legacy."

The research organization established by Allen has located a host of historic military shipwrecks, including the wreck of the Hiei, one of the first Japanese battleship to be sunk by U.S. forces during World War II. The group has also found the wrecks of the USS Helena, the USS Lexington and the USS Juneau.

Vulcan's biggest discovery, however, came in 2017, when Allen and his team found the long-lost wreck of the USS Indianapolis in the Philippine Sea.

Researchers across the globe are working to locate sites of World War II wrecks. The wreckage of U.S. B-24 bomber, for example, was discovered in Papua New Guinea, in a separate project. The plane’s wreck was found in 2018, 74 years after it was shot down during a fierce battle with Japanese forces.

Seventy-one lives were lost following the incident on Aug. 18, 1943, although the crew’s heroics kept the Abner Read afloat. Sailors worked quickly to shore up the damage and kept the main part of the Abner Read’s hull watertight. Two nearby U.S. Navy ships towed the destroyer back to port.