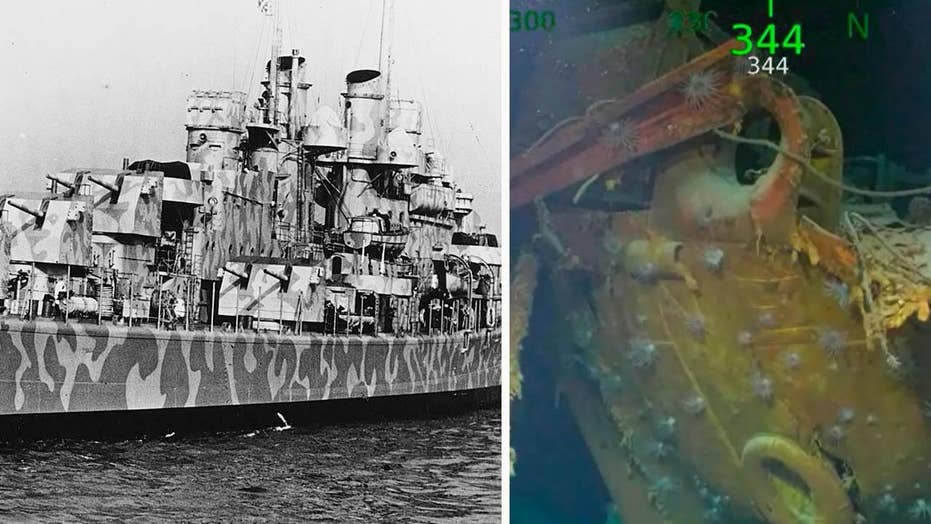 Wreckage from the sunken WWII military ship USS Juneau was discovered on March 17, 2018 off the coast of the Solomon Islands by philanthropist and Microsoft co-founder Paul Allen’s expedition crew on the Research Vessel Petrel.

The wreck of the USS Juneau, which was sunk by a Japanese torpedo and lost 687 sailors in 1942, has been discovered by billionaire Paul Allen’s crew.

Five brothers from the Sullivan family were famously lost on the USS Juneau. Their story, which attracted widespread attention, was depicted in the 1944 movie “The Fighting Sullivans.” Two USS Navy ships have been named “The Sullivans” in memory of the brothers.

The brothers wanted to serve on the same ship, despite naval policies preventing siblings from serving together.

The USS Juneau was found on St. Patrick’s Day resting on the seafloor near the Solomon Islands. An autonomous underwater vehicle (AUV) from the research vessel Petrel first identified the wreck using sonar on March 17. The following day, a remotely operated underwater vehicle (ROV) was deployed from Petrel to verify the wreckage, capturing video footage of the Juneau.

The prop of the USS Juneau resting on the seafloor. (Navigea, R/V Petrel)

“We certainly didn’t plan to find the Juneau on St. Patrick’s Day. The variables of these searches are just too great,” said Robert Kraft, director of subsea operations for Paul Allen, in a statement. “But finding the USS Juneau on Saint Patrick’s Day is an unexpected coincidence to the Sullivan brothers and all the service members who were lost 76 years ago.”

Juneau was sunk on Nov. 13 1942 during the Battle of Guadalcanal. When a second torpedo hit her port side, an explosion cut the ship in half, killing most of the crew. The light cruiser sank in just 30 seconds. Around 115 of Juneau’s crew are believed to have survived the sinking, including, possibly, two of the Sullivan brothers. However, with U.S. forces concerned about the risk of further Japanese attacks, rescue efforts did not take place until eight days later. Only 10 men were rescued from the water.

The first ship named after the brothers, USS The Sullivans (DD-537), was commissioned in 1943 and is now a museum ship in Buffalo. The second ship to bear the family name (DDG-68) is in active service as a guided missile destroyer.

“As the fifth commanding officer of USS The Sullivans (DDG 68), a ship named after five brothers, I am excited to hear that Allen and his team were able to locate the light cruiser USS Juneau (CL 52) that sunk during the Battle of Guadalcanal,” said Vice Adm. Rich Brown, commander, Naval Surface Forces, in a statement. “The story of the USS Juneau crew and Sullivan brothers epitomize the service and sacrifice of our nation’s greatest generation.”

Expeditions led by Microsoft co-founder Paul Allen have discovered a host of historic military shipwrecks, such as the USS Lexington, which was located earlier this month, 76 years after it was lost in the Battle of the Coral Sea.

Last year Allen’s crew found the long-lost wreck of the USS Indianapolis in the Philippine Sea. The sinking of the Indianapolis, which delivered the Hiroshima bomb and is mentioned in the movie "Jaws," in 1945 resulted in the greatest single loss of life at sea in the U.S. Navy’s history. Of 1,196 crew aboard the heavy cruiser, only 317 survived.