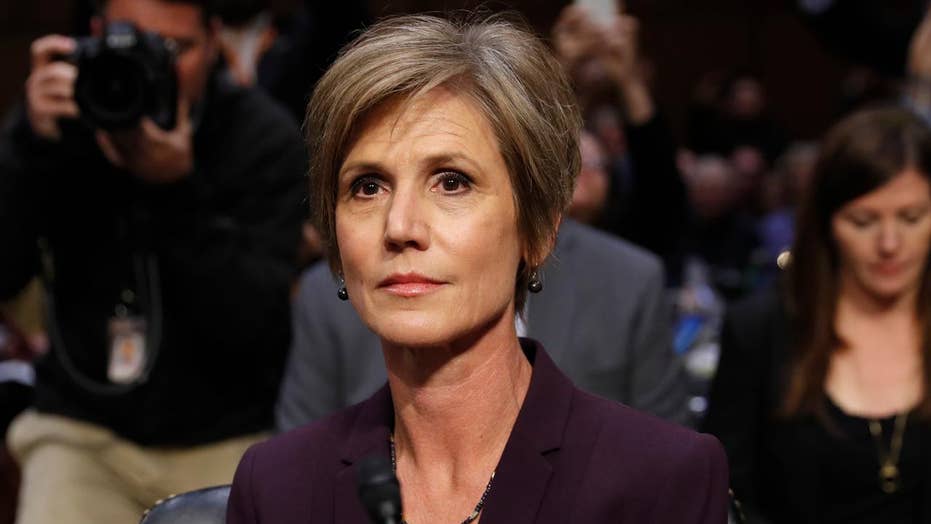 At the same hearing, testimony from another Obama official also challenged persistent allegations from some of the Trump administration’s fiercest critics about ‘collusion’ with Russia during the 2016 campaign.

James Clapper, who served as director of national intelligence during the Obama administration, stood by past assertions that he had no evidence of collusion between the Trump campaign and the Russian government. Asked by Sen. Lindsey Graham, R-S.C., whether that assessment is still accurate, Clapper said: “It is.”

Clapper admitted he also was not initially aware of the FBI’s counterintelligence probe into Russian meddling in the 2016 presidential election. But he said if there was any evidence of collusion, it “didn’t reach the evidentiary bar” needed for an intelligence assessment issued earlier this year. Clapper, further, reiterated that his team could not corroborate the contents of an infamous anti-Trump dossier that was shared with officials earlier this year.

The focus of the Graham-led hearing, however, was Yates' account on Flynn -- her first public testimony on the episode. Yates served in the Obama Justice Department and briefly as acting attorney general for Trump until the president fired her for refusing to defend his initial travel ban.

Yates told the Senate Judiciary subcommittee on crime and terrorism that she first notified White House Counsel Don McGahn in late January about Flynn’s contacts with the Russian ambassador, at a time when he apparently was relaying information to the contrary to Vice President Pence.

She said they met in a secure facility, and she informed McGahn about Flynn’s contacts in a “fair amount of detail.” She said that conduct was “problematic” – in part because the Russians knew about those contacts, and knew he had misled Pence about them.

“That created a compromise situation,” Yates testified, “… where the national security adviser could essentially be blackmailed by the Russians.”

She later testified: “We knew that that was not a good situation, which is why we wanted to let the White House know about it.”

Yates' account raises more questions about how Flynn stayed on for more than two more weeks following that notification.

Trump reacted to the testimony with a pair of tweets claiming Clapper and Yates revealed no new information.

After Trump’s tweets, multiple reports quoting unnamed Obama officials said Barack Obama himself warned Trump against hiring Flynn during their Oval Office meeting after the election. The White House acknowledged Monday that Obama relayed that he was not a "fan" of Flynn's.

Witnesses on Monday also offered new details about the “unmasking” of Trump associates before the current administration took office, a controversy with which Rice is connected.

Amid reports of individuals’ identities being disclosed from intelligence reports and circulated within the Obama administration, Graham said he’s learned “disturbing” information about that process.

But Clapper said the process has been “misunderstood” and explained the identities of Americans in intelligence reports can be revealed in certain circumstances -- however, he said, this should be provided only to the “person who properly requested it, not a broader audience.” He said 1,934 identities were unmasked in this way in 2016 and stressed, “At no time did I ever submit a request for personal or political purposes, or to voyeuristically look at raw intelligence, nor am I aware of any instance of such abuse by anyone else.”

This led to probing questions during Monday’s hearing. Sen. Charles Grassley, R-Iowa, asked the witnesses if they ever requested the identities of Trump, his associates or members of Congress be unmasked. Clapper answered that he had once, but couldn’t discuss it; Yates said she had not.

Clapper and Yates both answered affirmatively when asked if they ever reviewed classified documents where Trump, his associates, or congressional lawmakers were unmasked.

More broadly, Clapper stood by intelligence community findings that the Russian government “pursued a multi-faceted influence campaign in the run-up to the election” and sought to damage Democratic nominee Hillary Clinton and help Trump.

He said the Russians are “emboldened” to pursue similar activities in the future and added: “If there has ever been a clarion call for vigilance and action against a threat to the very foundation of our democratic political system, this episode is it.”