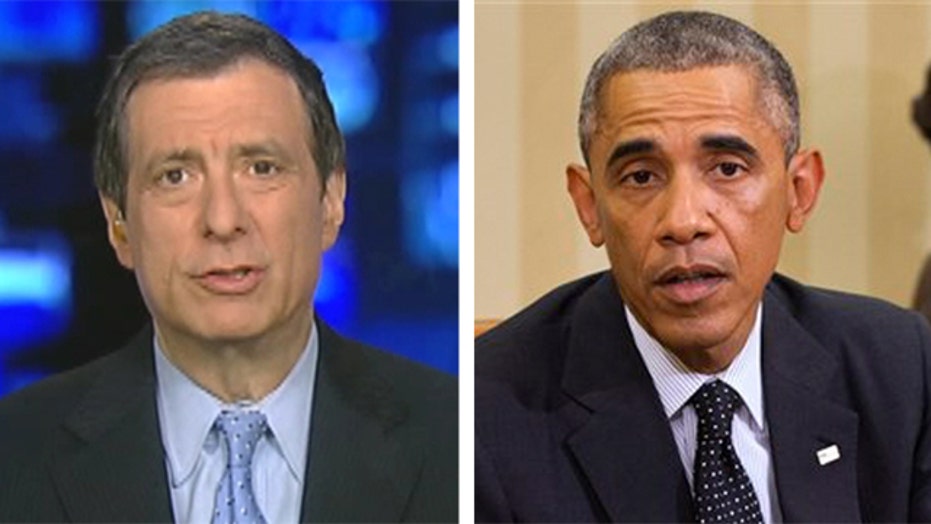 'Media Buzz' host says it's not about the staff, it's about President Obama

The rumblings are growing louder: What Barack Obama needs to salvage his presidency is that tried-and-true Beltway prescription, the shakeup.

Yep, if he’ll just dump that insular and incompetent staff, he can get back on track.

A housecleaning has its uses, most notably as a symbolic statement that an incumbent is seeking a fresh start. And obviously talented staffers can have an impact. Rahm Emanuel was a very different White House chief of staff than Denis McDonough.

But come on: Does anyone really believe some fresh faces at 1600 Pennsylvania are going to fundamentally change the way Obama does business?

This is just the beginning. Mark my words: If the Democrats lose the Senate, the calls for wholesale firings at the White House will grow louder. And there will undoubtedly be some sacrificial lambs.

But it is the president’s approach to the job—his inherent caution, his slow reaction to crises, his distaste for political schmoozing—that will shape his last two years in office. The others are, in the end, hired hands.

The latest chatter began when Politico’s Mike Allen reported that Ron Klain, when he finishes vanquishing Ebola, would probably leave his czar’s post to become chief of staff. Then there was a followup about McDonough asking those who don’t plan to stay till the end to leave by next summer—along with informed speculation about who’s on the way out.

This kind of exodus happens at the end of every two-term presidency. But the media lust for shakeup stories, so that is what it shall be called.

National Journal’s Ron Fournier is firmly in the pro-shakeup camp. I think he places way too much faith in the ability of aides to steer the ship of state. Here’s his argument:

“For his sake and ours, Obama must fire himself. He needs to recognize that, for all of his strengths as a person and a politician, he's shown an astonishing lack of growth on the job. Obama won't evolve unless he replaces enablers with truth-tellers—advisers unafraid of telling the president he's wrong.

“He should start, of course, with McDonough…

“Obama's communications team is a disaster. He could do better by dipping into the Clinton era for a battle-tested pro like former press secretary Mike McCurry. Or Dee Dee Myers, whose strategic savvy and communication skills were underappreciated by the men around Clinton.

“For new message leadership, Obama also should look outside politics (example: Starbucks executive Kris Engskov was a junior media aide in the Clinton White House) and outside his party (Republicans devoted as much to service as to ideology do exist, people like Rich Galen and Dan Bartlett).”

Can we just pause here and say that Dan Bartlett, who was George W. Bush’s counselor, is not going to become a top Obama official? Nor is another Fournier nominee, Leon Panetta, who just wrote a book that trashes Obama on foreign policy.

“At the National Security Council, Susan Rice's viability as a public figure has been compromised by erroneous and clumsy statements.” Okay, hard to argue with that.

“What of the two advisers without a specific portfolio: Valerie Jarrett and Dan Pfeiffer? They're blindly loyal to Obama, gatherers of power, shielded from blame, and accountable to nobody but the president. Their biggest admirers acknowledge privately that Obama won't change course unless Jarrett and Pfeiffer change work addresses.”

I do think the insularity argument (which doesn’t necessarily apply to Pfeiffer) has some resonance. Every president brings some pals to the West Wing: Richard Nixon and H.R. Haldeman. Jimmy Carter and Bert Lance. Bill Clinton and Mack McLarty. Many of them don’t work out.

Did bringing in Bill Daley make a big impact on Obama’s first term? Did the switch from Andy Card to Josh Bolten boost things for W.? Did Don Regan replacing James Baker change the course of the Reagan presidency?

Most White House aides are hard-driving people taking on high-burnout jobs. But Washington journalists, who deal with them regularly, tend to overestimate their importance, just as we sometimes cast campaign consultants as being more important than candidates. And pundits love the who’s up/who’s down aspect of the narrative.

But there’s only one person who can revive the fortunes of the White House, and he already has the biggest office in the building.