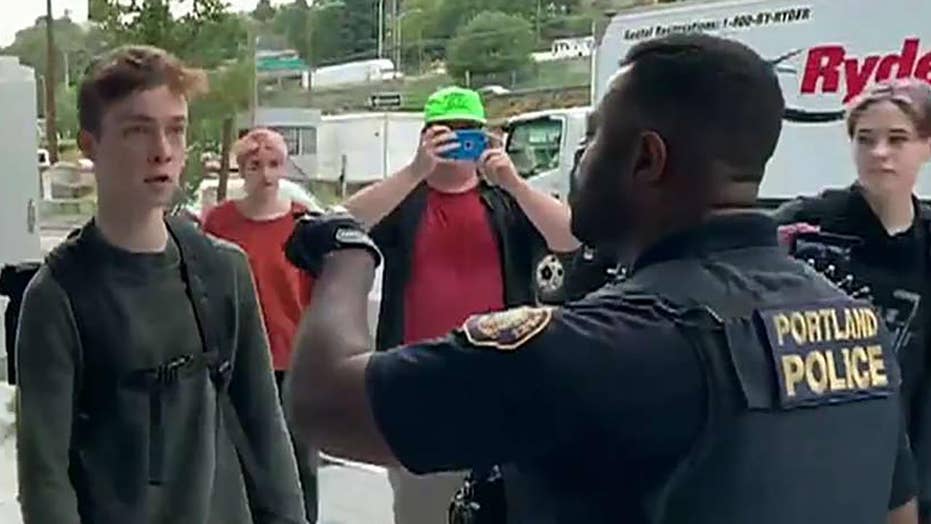 Antifa, the far-left militant movement that calls itself "antifascist," has no defined organizational hierarchy or membership process. The collection of autonomous Antifa groups in mostly left-wing cities sees itself as a descendant of the European anti-Nazi movements, and generally agrees that the best way to combat ideas they find odious is not through speech or debate but by direct action and physical confrontation.

The first modern Antifa group traces its roots back to Portland, Ore., in 2007, and more than a decade later that city has proven a hotbed for many Antifa members' preferred activities: threatening and violently assaulting journalists, declaring that all police officers should be killed or at least fired, wearing dark clothing and ski masks that sometimes obscure their artificially colored hair, and even engaging in performative clashes with right-wing groups to dull the monotony of typical suburban life.

Antifa was present during the infamous and deadly August 2017 "Unite the Right" rally in Charlottesville, Va. The event saw violent clashes between white supremacists, individuals protesting the removal of a Confederate statue, and left-wing groups. In a haunting moment caught on video, a neo-Nazi drove a car into a crowd of counterprotesters, killing one.

Following one of many clashes between Antifa and right-wing groups, Trump tweeted last year that “major consideration is being given to naming ANTIFA an ‘ORGANIZATION of TERROR.’” Nevertheless, Antifa has remained one of the most visible and violent left-wing groups in the United States.

In May 2020, Trump said the U.S. would indeed designate Antifa a "terrorist organization," after a rash of violent protests following the in-custody death of George Floyd. The move gives authorities more tools to track and prosecute criminal members of Antifa.

It remained unclear exactly who was behind the escalation of what began as peaceful protests against police over Floyd's death, with accusations lobbed against both far-left extremists and white nationalists. The president has been forceful in pointing the finger at the former. "It’s ANTIFA and the Radical Left. Don’t lay the blame on others!" Trump tweeted.

Secretary of State Mike Pompeo was less decisive in stating who is behind the looting, arson, and violence that has taken place. While he called rioters "Antifa-like" during an appearance on Fox News' "Sunday Morning Futures," he said, "I think it still remains to be seen exactly how" the situation devolved from peaceful protests to something entirely different.

Amid the mayhem, the son of Minnesota Attorney General Keith Ellison tweeted that he is declaring his support for Antifa. Jeremiah Ellison, who is a member of the Minneapolis City Council, noted in the tweet that he believes "white power" terrorists are actually the ones engaging in the looting, arson and other riot activities. Democrats have made scattered claims that the Russians and outside white supremacists are leading the violence, despite contrary evidence indicating that most arrested individuals are local.

Also in late May, Twitter suspended an account claiming to belong to Antifa.  The suspension came after the small account urged members to go into "white hoods" and "take what's ours." The account, it later emerged, was actually set up by a known white supremacist group. (Twitter and President Trump have sparred over censorship.)

Although several videographers and reporters have covered Antifa, Portland-based independent journalist Andy Ngo has perhaps most extensively documented attacks by self-described Antifa members on journalists, police officers, and even other Antifa members and left-wing supporters in recent years.

Last June, Ngo himself was attacked by Antifa while covering their confrontation with the far-right Proud Boys group, and suffered a brain injury.

"During today's events, there were multiple assaults reported, as well as projectiles thrown at demonstrators and officers," the police said in a statement after Ngo's injury. "There were also reports of pepper spray and bear spray being used by people in the crowd. Officers deployed pepper spray during the incident. There were reports of individuals throwing 'milkshakes' with a substance mixed in that was similar to a quick-drying cement. One subject was arrested for throwing a substance during the incident."

SUSAN RICE SAYS THE RUSSIANS COULD BE BEHIND VIOLENCE

Ngo told Fox News that Trump's efforts to consider Antifa a terror group "will provide a framework for local authorities and, especially, federal authorities to start investigating this criminal cartel for the street thugs that they are."

"In addition to the street hooliganism that we see over and over on the streets of America, this movement also has a political ideology that is agitating for a violent political revolution,' Ngo added.

A few weeks later, an individual who said he was associated with Antifa upgraded from cement to molotov cocktails and an AR-15, as he waged an assault on a federal immigration facility in Washington state. Willem Van Spronsen, 69, was shot dead quickly by responding authorities.

"It would give law enforcement greater tools, greater permission to use tools, in order to combat Antifa. Antifa is spreading from the West Coast, where it started, to different cities. Their intimidating tactics should be stopped where they are and not allowed to spread,” Cassidy said on "Fox & Friends."

Local authorities, meanwhile, have shown little interest in the matter.

"We're not going to come out and save you," police told a journalist last week as Antifa militants chased him away with pepper spray.

Portland Police Association President Daryl Turner released a statement last year after a flareup of Antifa violence, blaming Portland Mayor Wheeler for lack of enforcement and saying the mayor must “remove the handcuffs from our officers and let them stop the violence through strong and swift enforcement action.”

In response, Wheeler distanced himself from responsibility for the police response to Antifa — and took a shot at Cruz for calling for the feds to step in.

He added: “One of the things I would like the public to know, is there is a unified incident command center that's engaged during these demonstrations."

Left-wing academics, meanwhile, have defended Antifa. Ruth Ben-Ghiat, a professor of history at New York University, told The New York Times that Antifa's tactics of physically assaulting political opponents tend to attact negative press only because the right-wing media is being very unfair about it.

“Throwing a milkshake is not equivalent to killing someone, but because the people in power are allied with the right, any provocation, any dissent against right-wing violence, backfires,” Ben-Ghiat said.

Three people were arrested in early February after a demonstration in downtown Portland turned "violent" and a war memorial was vandalized.

Police did not provide details about the previously planned demonstration, but Oregon Live reported it was rumored to be a Ku Klux Klan white supremacy rally at a downtown park. Counter-protesters, including members of Antifa, still showed up even though police said the original event was scrapped.

Messages can be seen spray-painted on a war memorial in Portland, Ore. after a demonstration on Saturday. (Portland Police Bureau)