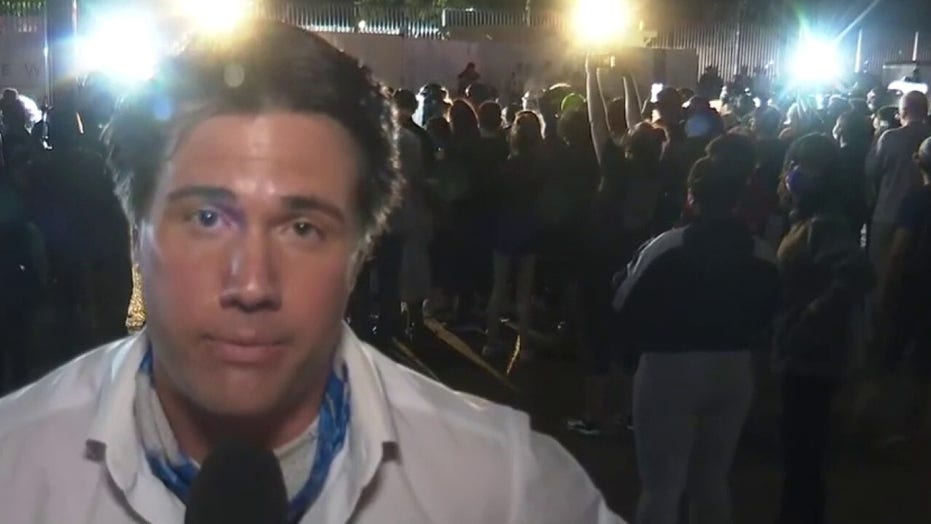 Fox News’ Leland Vittert reports on protests with two crewmembers when as many as a dozen masked protesters surrounded them.

An angry mob of rioters stoked by the death of a black man at the apparent hand of a Minneapolis cop turned its rage on a Fox News crew early Saturday, chasing and pummeling the journalists outside the White House in a harrowing scene captured on video.

Veteran reporter Leland Vittert was covering protests in Lafayette Park just before1 a.m. with three crewmembers when as many as a dozen masked protesters surrounded them, in footage caught by the Daily Caller. 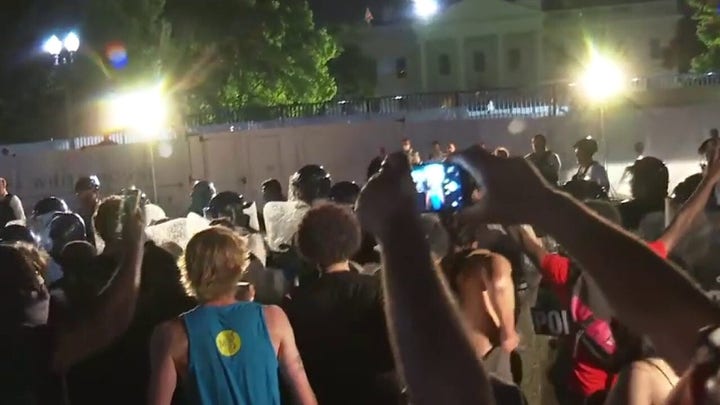 After a protester lunged at Vittert while he was reporting on air, the team made a beeline out of the park, with the hostile and growing crowd in pursuit.

Vittert and the crew were punched and hit with projectiles as they fled, and a Fox News camera was broken when a member of the mob tried to grab it.

DRAMATIC PHOTOS: RIOTS BREAK OUT ACROSS THE COUNTRY IN REACTION TO DEATH OF GEORGE FLOYD

"Imagine what it's like to be a black man, feeling like this every f***ing day,” a woman is seen shouting at the crew as they hurried away, surrounded by a growing mob.

Vittert, a veteran reporter who has been in countless tight spots during his 15-year career, including violent clashes in Egypt, Libya and the West Bank, war in Eastern Ukraine and coverage of the 2015 Baltimore riots following the death of Freddie Gray in police custody, said the Saturday morning attack left the crew shaken.

“This was the scariest situation I’ve been in since I got chased out of Tahrir Square by a mob, and this was equally scary,” said Vittert, referring to his coverage for Fox News Channel of the 2011 Arab Spring and ousting of  Egyptian strongman Hosni Mubarak.

TRUMP WARNS WHITE HOUSE PROTESTERS WOULD HAVE BEEN MET BY 'VICIOUS DOGS', 'OMINOUS WEAPONS' IF THEY BREACHED FENCE

The crew, which consisted of Vittert, Fox News cameraman Christian Galdabini and two security staffers - one of whom was punched in the face and knocked to the ground - made it out of the park and found a police car some two blocks away. But Vittert said the cop at the wheel refused to get out of the squad car, even as he frantically pounded on the window, surrounded by the hostile mob.

"We were very clearly on our own, and in that situation, you just don't know how things are going to play out," Vittert said.

Galdabini, who has covered violence in Iraq and Afghanistan, said the officer appeared to radio for reinforcements, and riot police soon showed up to restore some semblance of order.

"It was a wild one," said Galdabini, who staved off an attempt to steal his camera as he was was doused with water and hit with objects. "In the park, you could feel the mob mentality taking over.  There were no cops anywhere. There was nobody there to keep things calm and it got out of hand."

Vittert praised the security team for helping guide the team to safety.

"I give a lot of credit to them," Vittert said early Saturday. "I'm also grateful that the Daily Caller and some of the other organizations were able to follow the mob and document it. I really appreciate that they had our backs."

Fox News Media CEO Suzanne Scott praised the reporting of Vittert and Galdabini, as well as their colleagues Jonathan Serrie, Mike Tobin and Steve Harrigan, who all contributed from the field to Fox News' comprehensive coverage of the intense events unfolding around the country late Friday and early Saturday. Journalists should not face danger or harassment while reporting on the ongoing tensions, she said.

"We strongly condemn these actions against FOX News Media reporting teams as well as all other reporters from any media outlets who are simply trying to do their jobs and report the news during an extraordinary time in our country’s history," Scott said in a statement Saturday. "Yesterday, we denounced the detainment of the CNN crew in Minneapolis and stood with them to protect all journalists’ right to report without fear or favor."

Hours before the attack on Vittert's team, the White House had been on lockdown as protests and riots escalated around the country. Fox News journalists and other members of the press were moved inside for a brief period with approximately a dozen reporters sheltered inside the West Wing.

The ongoing protests are in reaction to the death of George Floyd, who died in police custody in Minneapolis May 25 after a white officer pinned him down by pressing his knee into the back of Floyd’s neck while Floyd repeatedly said he couldn't breathe. The officer, Derek Chauvin, was fired and on Friday was charged with murder. Three other police officers were also fired but have not been charged.

In Atlanta, demonstrators spray-painted and broke windows of CNN’s Atlanta headquarters. One protester climbed up onto the CNN building and waved a “black lives matter” sign as hundreds of other protesters pelted police with bottles.