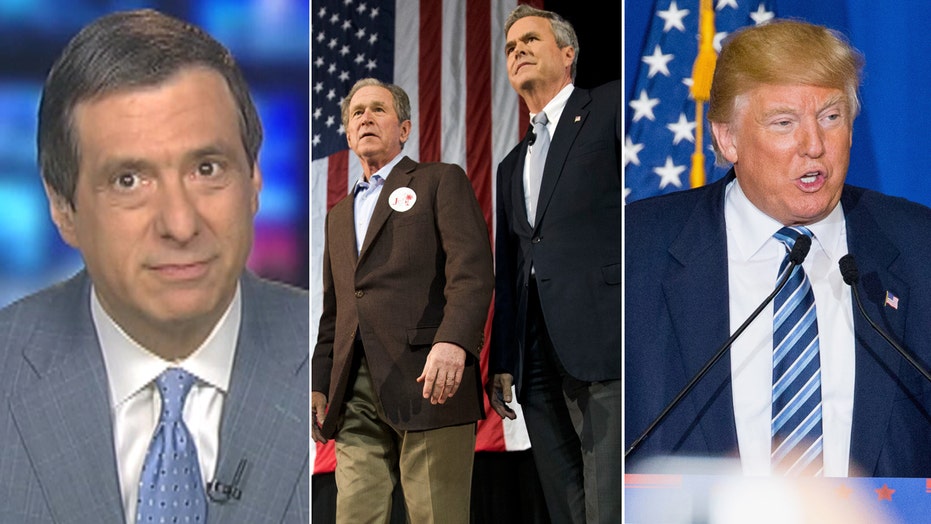 Who would have thought, nearly eight years after he left the White House, that George W. Bush would become a pivotal figure in the 2016 campaign?

Yet Donald Trump has aggressively whacked the former president, who responded for the first time in a South Carolina appearance for Jeb.

It was striking to see W., who’s a more gifted speaker than his brother, because he has so doggedly avoided the limelight since leaving office. The fact that Jeb Bush brought him in, along with their mom and Laura Bush, shows that he finally sees no choice but to embrace the family name.

I first saw Jeb—who had been running with just an exclamation point!--declare he’s proud to be a Bush in New Hampshire, and he seemed more comfortable doing it than the awkward distancing act he had previously attempted. But obviously the 43rd president is both asset and liability.

George W. left office quite unpopular after the Iraq war and the financial meltdown, creating something of an albatross for the man who would be the third President Bush. But W. is popular among Republicans in South Carolina, where his brother badly needs a strong showing after a campaign that’s been far more successful at raising money than winning votes.

Trump has made the calculation that tarnishing Bush 43 will tarnish the man who wants to be Bush 45. Or perhaps he just got angry in the CBS debate.

On that stage, Trump not only hit the former president for “a big, fat mistake” in invading Iraq, he said “they lied” about whether Saddam had weapons of mass destruction. In doing so, he sort of echoed the “Bush lied, people died” line of liberal extremists, and the next day Trump retreated a bit on the Bushies having prior knowledge that their WMD claims were false.

When Jeb said his brother “kept us safe” while Trump was creating a reality show, the billionaire hit back with the twin towers coming down on Bush 43’s watch. He has said this before, reviving talk of those intelligence warnings in 2001, but in a debate it was unusual to see a Republican candidate attacking a Republican president.

The former president didn’t mention Trump by name, but his target was unmistakable when he said in South Carolina: “I understand that Americans are angry and frustrated, but we do not need someone in the Oval Office who mirrors and inflames our anger and frustration.”

The pundits, having been burned so many times before, still wondered whether this time Trump had gone too far: He looked angry, he sounded like a Democrat, he even offered qualified praise for Planned Parenthood.

Joe Scarborough acknowledged that he thought Trump would lose 20 points after the debate, and so far that hasn’t happened. (A PPP poll conducted after the debate shows Trump still leading in South Carolina with 35 percent, followed by Ted Cruz and Marco Rubio at 18, John Kasich at 10, Ben Carson at 7, and Jeb at…7 percent.)

What Trump is doing is not just dominating the news cycle, but jamming all the communications channels. He’s generating multiple stories, so if journalists don’t like the appetizers, there’s a sizzling steak over here, some fried chicken, and irresistible deserts. The other candidates hit back, and that keeps the narrative going. Even when the coverage is negative, it revolves around Trump.

So was it wise to take on George W. Bush? By reminding voters of the negative side of his presidency, especially Iraq, Trump implicitly argues that his brother would bring the same brand of military interventionism. And if that makes Trump sound a bit like a Democrat, well, remember that he’s running against the Republican establishment as well as the other party.

Trump made a mocking reference to Bush’s “Mission Accomplished” moment, the aircraft carrier landing that seemed impressive at the time but later became a symbol of overconfidence and arrogance. We may know on Saturday whether that line of attack helped accomplish Trump’s mission.