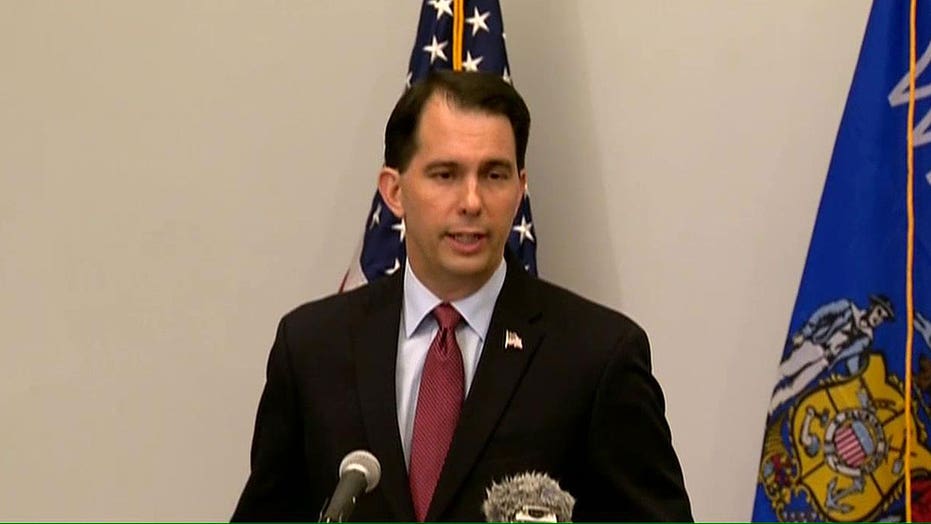 Walker suspends 2016 campaign, urges other to do the same

Republican governor of Wisconsin criticizes tone of presidential race, says he's being called to lead by clearing the field

Wisconsin Gov. Scott Walker, once a leading candidate in the Republican presidential race, suspended his struggling 2016 campaign on Monday -- while issuing an appeal to his party to counter the rise of front-runner Donald Trump.

At a hastily called press conference in Madison, Walker confirmed the news that by that point had leaked out: "I will suspend my campaign immediately."

But the governor also lamented that the contest has "drifted into personal attacks" and urged other contenders to consider following him out of the race, if only to help elevate those who can compete against the front-runner. Without naming Trump, Walker warned that he thinks the billionaire businessman could damage the party.

"I believe that I am being called to lead by helping to clear the field in this race so that a positive, conservative message can rise to the top of the field," Walker said. "... I encourage other Republican presidential candidates to consider doing the same so that the voters can focus on a limited number of candidates who can offer a positive, conservative alternative to the current front-runner."

The decision marks a swift reversal in fortunes for Walker, who over the summer was seen as the candidate to beat in the key state of Iowa. But the governor who forged a national reputation on his record battling union power in his home state saw his position slide in recent months.

Walker was plagued by a series of missteps, and was seen as performing poorly in the first two primary debates, generally struggling to stand out amid a crowded and boisterous 2016 field.

The 47-year-old had told Fox News before last Wednesday's debate at the Reagan Library that he planned to "be aggressive" and show the kind of "passion" that brought him to victory in the past. Walker did have a few notable moments -- including telling Trump "we don't need an apprentice in the White House ... we have one right now.” But he was arguably outshined not only by Trump but Carly Fiorina and others.

For Walker, much was riding on his performance in that debate. In the aftermath, a CNN/ORC poll released Sunday showed Walker polling nationally at less than 1 percent.

Throughout his campaign, Walker cast himself as an "aggressively normal" conservative, campaigning as a fighter who had a number of victories in a state that hasn't voted for a Republican president since 1984.

However, when campaigning for president, he appeared to struggle in stating his policy positions. He appeared to flip-flop on whether he supported ending birthright citizenship in August, and showed interest in building a wall between the U.S. and Canada, only to later laugh it off as ridiculous.

Immediately after the decision to suspend the campaign was reported, fellow 2016 candidate Ben Carson called Walker "an outstanding leader with a strong record of fighting for conservative principles."

"I wish him the very best," Carson said.

Trump also praised Walker on social media ahead of the formal announcement.

While Walker may be leaving the race, his well-known feud with major labor unions showed no sign of fading away. AFL-CIO boss Richard Trumka released a scathing and brief statement: "Scott Walker is still a disgrace, just no longer national."

The move may have come to a surprise to supporters following Walker on Twitter, as he tweeted Monday he was "here to fight and win in Iowa."

A Walker donor told Fox News that even large donors were kept in the dark about the decision. A Monday afternoon conference call with donors gave no hint that this was coming, the donor said.

Fox News' Ed Henry and William Turner and The Associated Press contributed to this report.