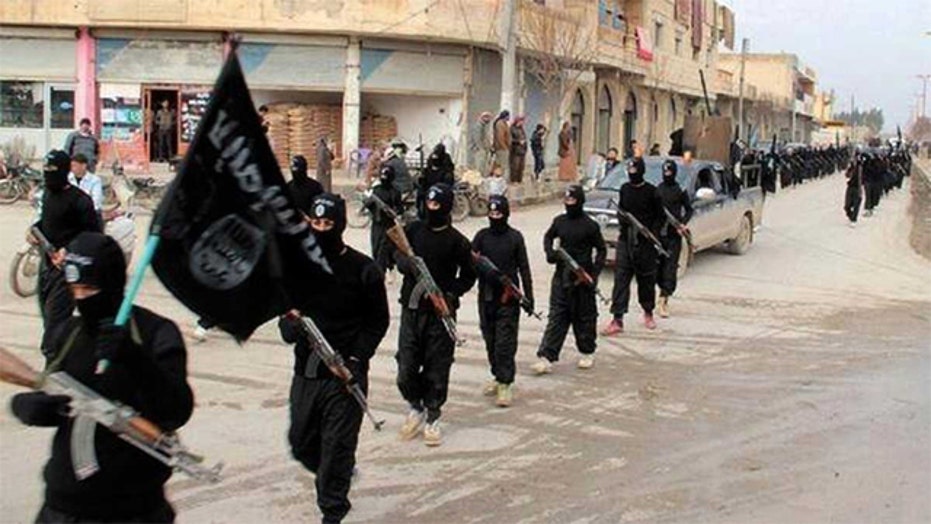 Time for US 'boots on the ground' in Iraq?

Reaction from Ric Grenell, adviser to four US ambassadors to the United Nations

U.S. fighter jets and drones stepped up attacks on Islamic State targets in Iraq and the Obama administration was weighing sending more boots on the ground -- even as the group released a graphic video showing the beheading of American journalist James Foley.

Though the militants who executed Foley framed the brutal beheading as retaliation for American airstrikes, the administration gave no indication Wednesday that it was dialing back.

President Obama, speaking from Martha’s Vineyard where he's on vacation, responded to the online posting of the beheading video by calling for a “vigilant” and “relentless” effort against the group, also known as ISIS or ISIL.

The president said the video of Foley's death "shocks the conscience," while vowing to continue the fight against the organization which has taken root across swaths of Iraq and Syria. He called for a "common effort" across the Middle East to "extract this cancer so it does not spread."

The Defense Department reported Wednesday afternoon that U.S. aircraft have conducted another 14 strikes near the Mosul Dam, which Kurdish and Iraqi forces recently re-took from Islamic militants. The latest strikes took out militants’ Humvees and other targets.

A senior U.S. official also told Fox News that military planners are weighing the possibility of sending more American forces to Iraq mainly to provide additional security “in and around Baghdad,” at the request of the State Department.

The official said the Pentagon is seriously considering sending fewer than 300 personnel, but there has been no final decision yet.

The developments come as U.S. intelligence analysts confirmed the authenticity of the execution video.

Military analysts and U.S. lawmakers say the execution should be a wake-up call to the need to dismantle the militant organization.

The beheading marks the first time the Islamic State -- also known as ISIS, or ISIL -- has killed an American citizen since the Syrian conflict broke out in March 2011, upping the stakes in an increasingly chaotic and multilayered war.

“America got a glimpse of exactly who they are,” House Intelligence Committee Chairman Mike Rogers, R-Mich., told Fox News on Wednesday. “This is a group you need to deal with.”

Sen. Marco Rubio, R-Fla., called the "brutal execution" of a hostage "the clearest indication to date that ISIL has declared war on the United States."

The militants in the video railed against U.S. airstrikes in Iraq and threatened to kill a second American journalist, depending on Obama’s “next decision” – an apparent reference to U.S. military policy in the region.

The video puts pressure on the White House to weigh the risks of ramping up airstrikes in Iraq targeting the Islamic State, and the possibility that militants could kill more Americans in response. Asked Wednesday how many other journalists are being held, State Department spokeswoman Marie Harf said officials are aware of "other Americans" and journalists from other countries. Fox News is told this includes the second journalist in the video, Steven Sotloff, and an unidentified U.S. aid worker.

But as U.S. airstrikes continued, Rogers and others said the video only underscores the need to develop a clear strategy for defeating the group. Rogers said this week’s success, for instance, in helping Iraqi and Kurdish forces retake the Mosul Dam from militants must be part of a “bigger strategy.”

“That [video] ought to get us off our backsides and get to work on dismantling this organization. It’s dangerous,” he told Fox News.

Foley's family also confirmed his death in a statement posted on a Facebook page that was created to rally support for his release, saying they "have never been prouder of him."

"He gave his life trying to expose the world to the suffering of the Syrian people," said the statement, which was attributed to Foley's mother, Diane Foley. She implored the militants to spare the lives of other hostages. "Like Jim, they are innocents. They have no control over American government policy in Iraq, Syria or anywhere in the world."

Foley, 40, from Rochester, N.H., went missing in northern Syria in November 2012 while freelancing for Agence France-Presse and the Boston-based media company GlobalPost. The car he was riding in was stopped by four militants in a contested battle zone that both Sunni rebel fighters and government forces were trying to control. He had not been heard from since.

The group is the heir apparent of the militancy known as Al Qaeda in Iraq, which beheaded many of its victims, including American businessman Nicholas Berg in 2004.

The video released on websites Tuesday appears to show the increasing sophistication of the Islamic State group's media unit and begins with scenes of Obama explaining his decision to order airstrikes.

It then cuts to a balding man in an orange jumpsuit kneeling in the desert, next to a black-clad militant with a knife to his throat. Foley's name appears in both English and Arabic graphics on screen. After the captive speaks, the masked man is shown apparently beginning to cut at his neck; the video fades to black before the beheading is completed. The next shot appears to show the captive lying dead on the ground, his head on his body.

At the end of the video, a militant shows a second man, who was identified as American journalist Steven Sotloff, and warns that he could be the next captive killed. Sotloff was kidnapped near the Syrian-Turkish border in August 2013; he had freelanced for Time, the National Interest and MediaLine.

Fox News’ Justin Fishel and The Associated Press contributed to this report.