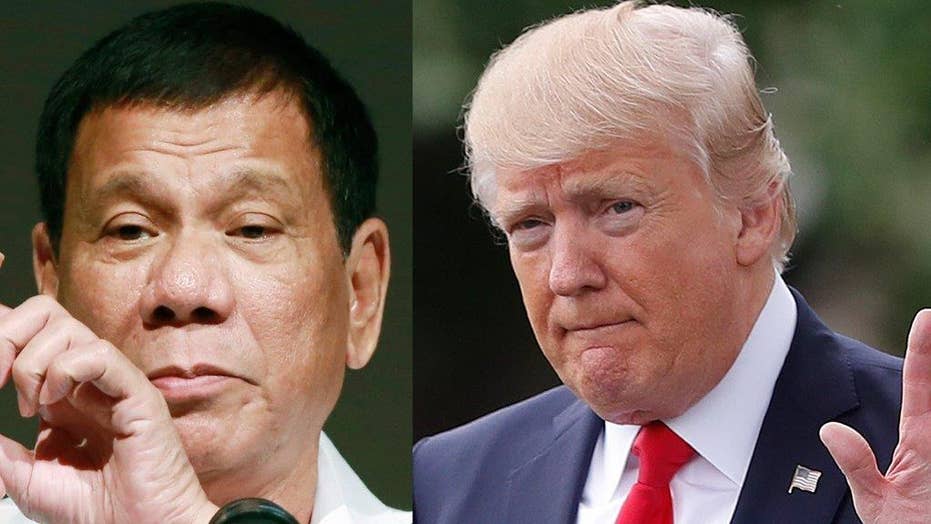 The White House is facing fresh criticism following an invitation President Trump extended over the weekend to controversial Philippine leader Rodrigo Duterte, who has been accused of numerous human rights violations in his southeast Asian country.

Not only were U.S. lawmakers left scratching their heads at the Duterte invite, but The New York Times reported that officials at the State Department and the National Security Council were caught off guard and that it’s likely to spur internal objections.

Duterte’s leadership in the Philippines and his controversial war on drugs has led to a sharp spike in extrajudicial killings. He’s been accused of masterminding mass killings and is facing a complaint for alleged mass murder before the International Criminal Court.

He’s also threatened to kill Filipino journalists, bragged about personally executing people and has spoken about his willingness to commit rape. He’s also compared himself to Adolf Hitler.

White House Press Secretary Sean Spicer said Monday the president is “fully briefed on leaders” and that when Trump speaks with leaders “he gets briefed on what they’re doing, done.”

Democratic lawmakers quickly slammed Trump for first praising and then inviting Duterte to the White House.

“President Trump weakens American values when he fails to stand up for human rights,” Sen. Chris Coons, D-Del., said in a written statement Monday. “President Duterte has overseen the illegal killing of thousands of his own people in the Philippines. By welcoming Duterte to meet with him in the White House, Trump risks giving Duterte’s actions – and his brutal human rights violations – an American stamp of approval.”

Sen. Chris Murphy, D-Conn., a member of the Senate Foreign Relations Committee, tweeted, “We are watching in real time as the American human rights bully pulpit disintegrates into ash.”

U.S. and Philippine officials said Trump’s calls and invitations to several Asian allies including Duterte were aimed at discussing the escalating nuclear crisis in North Korea.

A White House statement described the Saturday call between Trump and Duterte as “very friendly” and said the alliance between the two nations is “now heading in a very positive direction.”

Trump’s chief of staff, Reince Priebus, defended the call on ABC’s “This Week” on Sunday when he said the U.S. needs to deal with Duterte, despite his human rights records, in order to help calm escalating tensions in North Korea.

Late Monday afternoon, the State Department said it has discussed Duterte’s policies “on multiple occasions with the Philippine government.”

“We have encouraged the Philippines to investigate credible reports of extrajudicial killings and note that authorities have taken some steps in this direction,” the State Department said, adding that a “constructive relationship with the government of the Philippines is critical to supporting the frank and open communication that characterizes our longtime alliance.”

Manila is about 1,800 miles from North Korea and its navy doesn’t have a strong defense force, leaving some to question how it would fit into a regional strategy for the U.S. Pyongyang regularly threatens to aim its weapons at South Korea and Japan but hasn’t gone after the Philippines.

“President Trump's decision to welcome the Philippines’ leader to Washington at a time when thousands of Filipinos are being slaughtered in the streets—at President Duterte’s direction—calls into question long held American policy of promoting human rights and the rule of law,” he said in a statement.

“Although the traits of his personality likely make it impossible, Trump should be ashamed of himself,” he added.

Duterte once told former President Barack Obama to “go to hell” for criticizing his bloody policies. During Obama’s last few months in office, the Philippine leader actively built closer economic ties with Russia and China while repeatedly threatening to cut military ties that had been in place for years with the United States.

“Where was the criticism from all of these Democrats when the Obama administration sent John Kerry to the Philippines to meet with Duterte nine months ago?” he asked.

But foreign policy experts warn that having a working relationship with a country like the Philippines is far different than showering praise on it and could have serious repercussions down the line.

“We’ve always had relationships with governments that are problematic, but we hold them accountable on it and we don’t lavish them with praise this way,” said Ilan Goldenberg, a former State Department official under John Kerry, told Politico.

Despite the invite uproar, Duterte reportedly could not commit to any meeting.