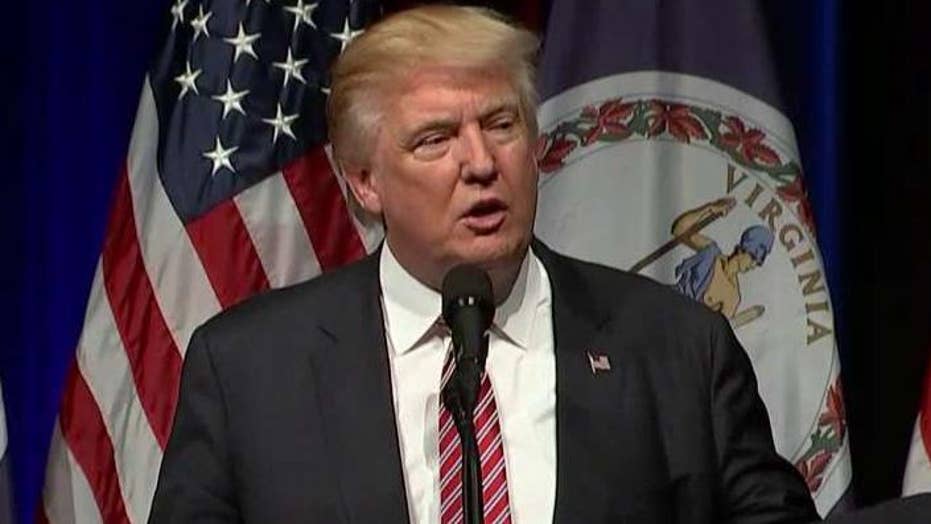 Trump tries to turn the tables on Clinton amid Khan feud

John Roberts with the Republican roundup for 'Special Report'

In an interview with The Washington Post, Trump said he was "just not there yet" when asked if he would endorse Ryan in next Tuesday's primary against Paul Nehlen. The statement was very close to words Ryan used in the long months before he endorsed Trump, when he told CNN on May 6, "I'm not there right now."

On Monday evening, Trump sent out a tweet thanking Nehlen for his support in the real estate mogul's ongoing war of words with the Muslim American parents of an Army captain killed in Iraq.

Thanks to @pnehlen for your kind words, very much appreciated.

Ryan campaign spokesman Zach Roday said that neither the Speaker "nor anyone on his team has ever asked for Donald Trump's endorsement. And we are confident in a victory next week regardless."

Trump also refused to back McCain, who faces an Aug. 30 primary against two GOP opponents, and who Trump has previously derided for being captured during the Vietnam War.

"I’ve never been a big fan of John McCain and I just hate the way veterans have been treated by John and other people," Trump told "The O'Reilly Factor" Tuesday night. "He should have grabbed that issue [of the VA wait time scandal]. That's his issue."

As for Ayotte, who is running for a second Senate term against New Hampshire Gov. Maggie Hassan and who skipped the Republican National Convention, Trump told the Post: "You have a Kelly Ayotte who doesn't want to talk about Trump, but I'm beating her in the polls by a lot."

It was not immediately clear to which poll Trump was referring. A poll taken by WMUR-TV and the University of New Hampshire prior to the national party conventions showed Ayotte trailing Hassan, 45 percent to 42 percent, while Trump trailed Democratic nominee Hillary Clinton 39 percent to 37 percent among Granite State voters.

Ryan, McCain and Ayotte had all said they would support Trump as the GOP presidential nominee. However, all three also chided Trump for engaging in a flap with Khizr and Ghazala Khan, the parents of U.S. Army Capt. Humayun Khan, who was posthumously awarded a Bronze Star and Purple Heart after his death in 2004.

From the stage at the Democratic National Convention, Khizr Khan criticized Trump's position on Muslims and asked whether the real estate mogul had read the Constitution. Trump said the grieving father had "no right" to criticize him but later acknowledged their son is a hero.

Ayotte, who previously said she was "appalled" by Trump's spat with the Khans, responded to Trump's latest comments with a brief statement: "I call it like I see it, and I'm always going to stand up for our military families and what's best for the people of New Hampshire." The Post, citing Ayotte's campaign, reported that she still planned to vote for Trump in November.

McCain's response was a lengthy denunciation in which he said the GOP nomination does not confer on Trump "unfettered license to defame those who are the best among us."

Ryan condemned any criticism of Muslim Americans who serve their country.

"Captain Khan was one such brave example. His sacrifice — and that of Khizr and Ghazala Khan — should always be honored. Period," Ryan said.

Also Tuesday, retiring New York Rep. Richard Hanna became the first Republican member of Congress to say he will vote for Clinton in November instead of Trump.

"He is unfit to serve our party and cannot lead this country," Hanna wrote in a column published in The Post-Standard newspaper of Syracuse, New York. "He is unrepentant in all things."

"As someone who has worked to further the Republican Party's principles for the last 15 years, I believe that we are at a moment where silence isn't an option," Comella told CNN.

Hanna and Comella join dozens of high-profile GOP leaders who have previously said they would not vote for Trump, including the party's 2012 nominee, Mitt Romney, and Bradshaw's former employer, former Florida Gov. Jeb Bush.

On Monday, Sally Bradshaw, one of five senior Republican strategists tasked with identifying the party's shortcomings and recommending ways it could win the White House after the 2012 election, said she was leaving the GOP and would vote for Clinton if the race in her home state of Florida appears close come Election Day.