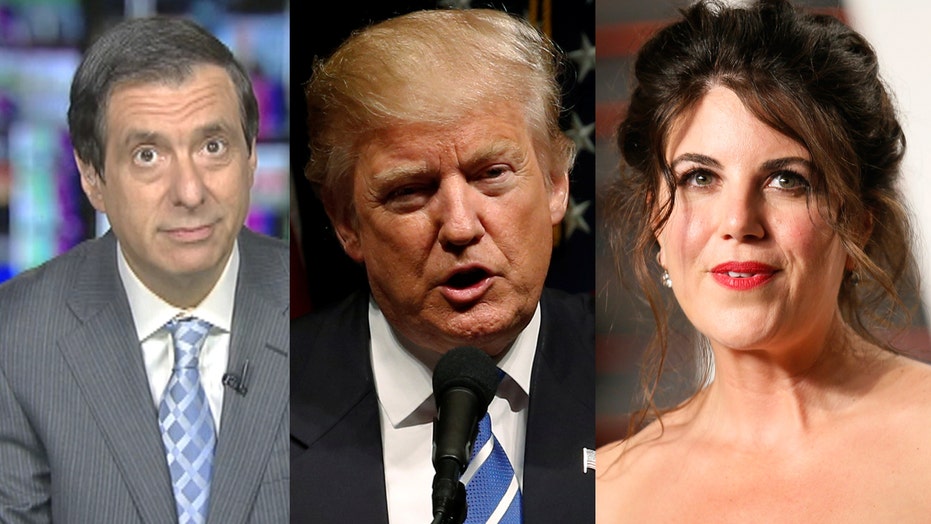 Donald Trump is openly considering playing the Monica card in the next debate. But does that make sense?

And is the whole subject of Bill Clinton’s past sexual misconduct about to get more media coverage?

It has been hovering on the horizon, but came into sharper focus when Trump declared at the end of the Hofstra debate: “I was going to say something extremely rough to Hillary, to her family, and I said to myself, ‘I can't do it. I just can't do it. It's inappropriate. It's not nice.’” Trump later said he was talking about her husband’s affairs.

David Bossie, a longtime Clinton antagonist who is now Trump’s deputy campaign manager, told “Fox & Friends” that “if you look at Hillary Clinton's background and if you look at her being an enabler, really, in the '90s and really attacking these women, it goes against everything that she now tries to spout as a candidate for president.”

Politico quotes several Republican senators as urging Trump not to go there. Georgia’s David Perdue: “That’s a distraction away from the high ground he’s got… All of this [about Bill Clinton] really doesn’t matter. People back home are concerned about the economy and security issues.”

Mississippi’s Roger Wicker: “I hope he doesn’t. He oughta stick to how he’s going to make life better for the average American worker.”

Are they right? I covered all of this in the 1990s: Gennifer Flowers, Kathleen Willey, Paula Jones, Monica Lewinsky, Juanita Broaddrick and on and on. It’s hardly a state secret that Hillary Clinton’s husband was impeached for lying about his sexual activities with Lewinsky, the former White House intern, or that Hillary initially defended him by going on the “Today” show and decrying a “vast right-wing conspiracy.” Just as she had sat with him in 1992 as he denied Gennifer’s allegations on “60 Minutes,” only to admit a sexual relationship with her years later.

The view after impeachment was that her husband’s reckless behavior generated enormous sympathy for Hillary, and she was elected to the Senate less than two years later.

Trump could try to undercut Clinton’s standing with women by arguing that she condoned her husband’s behavior or played a role in attacking them. But this would also open the door to questions about Trump’s three marriages, including his affair with Marla Maples, which fueled a feeding frenzy among New York’s tabloids. Trump told an interviewer yesterday that he supposed he was fair game but "it's a lot different than his ... I have a very good history."

Clinton spokesman Brian Fallon said that by targeting her “marriage,” Trump is trying “to distract from his demeaning comments against women.”

The Washington Post, in a piece titled “Enabler or Family Defender?”, reports that “Clinton’s friends say they have seen her deal with Bill Clinton’s conduct before, bristling at threats and countering them with steely determination…

Her detractors, though, say that Clinton has unfairly lashed out over the years at the women involved in her husband’s indiscretions.”

So what should the press do?

It’s hard to argue that the media are too decorous to cover this stuff, since Bill Clinton’s misconduct drew saturation coverage for years. And some voters may be too young to remember it.

On the other hand, that was nearly two decades ago. And while a Hillary Clinton victory would put him back in the White House, she is the presidential candidate. Many commentators would undoubtedly scold Trump for what they would view as a sordid attack.

If Trump starts bringing up the subject, it is news that must be covered. Just look at how wild the media went over his Twitter message about bringing Gennifer Flowers to the debate after Clinton invited his nemesis Mark Cuban.

Whether these blasts from the past would help Trump's cause is anyone’s guess.