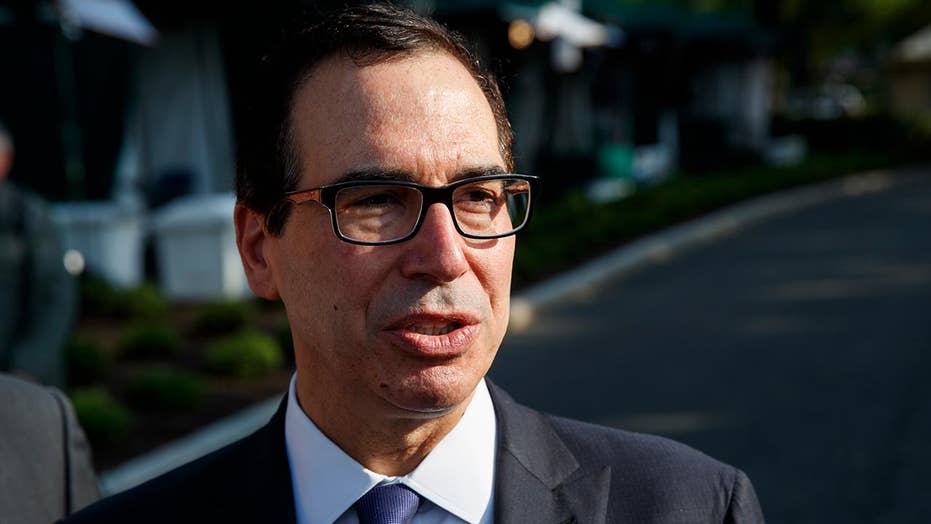 President Trump touted progress in trade negotiations with China on Monday following criticism that Beijing might be getting the better of the administration.

“I ask Senator Chuck Schumer, why didn’t President Obama & the Democrats do something about Trade with China, including Theft of Intellectual Property etc.? They did NOTHING! With that being said, Chuck & I have long agreed on this issue! Fair Trade, plus, with China will happen!” Trump tweeted early Monday.

The president’s tweet comes after high-level talks in Washington last week. Beijing agreed in a joint statement with the U.S. to  “substantially reduce” America’s trade deficit with China, but did not commit to cut the gap by any specific amount. The Trump administration has sought to slash the deficit by $200 billion.

MNUCHIN SAYS US HAS DEAL WITH CHINA TO CUT TRADE DEFICIT, WILL HOLD OFF ON TARIFFS

In a written statement Sunday, Senate Minority Leader Chuck Schumer, D-N.Y., said: "President Trump has created a unique opportunity but the people doing the negotiating shouldn’t blow it. There is nothing wrong with these talks but the proof of the pudding is in the eating."

He called for China to take "strong actions on intellectual property, cyber theft, and American companies having free access to sell goods in China."

Treasury Secretary Steven Mnuchin on Sunday said that the U.S. and China have reached a tentative deal to cut trade deficits that includes the U.S. putting China tariffs on hold, an agreement that potentially averts an economic standoff. Mnuchin said that tariffs would be put on hold while the countries try to execute the framework agreement. Mnuchin also said the U.S. expects to see farm sales to China increasing 35 to 45 percent this year alone.

“China has agreed to buy massive amounts of ADDITIONAL Farm/Agricultural Products—would be one of the best things to happen to our farmers in many years!” Trump tweeted Monday. “On China, Barriers and Tariffs to come down for first time.”

But Trump has faced criticism, including from Sen. Marco Rubio, R-Fla.

“If putting tariffs ‘on hold’ means that while we ‘talk’ #China gets to continue to block U.S. companies but do whatever they want here & to steal intellectual property then #China has out negotiated the U.S. again,” Rubio tweeted on Sunday. “If we make a deal in which #China promises to buy $200 billion from U.S. in exchange for business as usual, the current administration will become the latest example of a White House so desperate for a deal they get beat badly by China in negotiation.”

The Trump administration proposed tariffs on $50 billion of Chinese imports, and Trump later ordered U.S. Trade Representative Robert Lighthizer to seek up to an additional $100 billion in Chinese products to tax.

Sen. Lindsey Graham, R-S.C., however, praised the administration's actions, noting it was “smart to engage China on trade abuses” and would also be “smart to get them more involved in trying to help us with North Korea.”

The president echoed that sentiment on Twitter early Monday.

“China must continue to be strong & tight on the Border of North Korea until a deal is made. The word is that recently the Border has become much more porous and more has been filtering in. I want this to happen, and North Korea to be VERY successful, but only after signing!” Trump tweeted.

The president is slated to meet with North Korean dictator Kim Jong Un in Singapore on June 12, though the rogue regime has threatened to cancel talks following military exercises practiced by South Korea and U.S. North Korea canceled a high-level summit with South Korea last week.