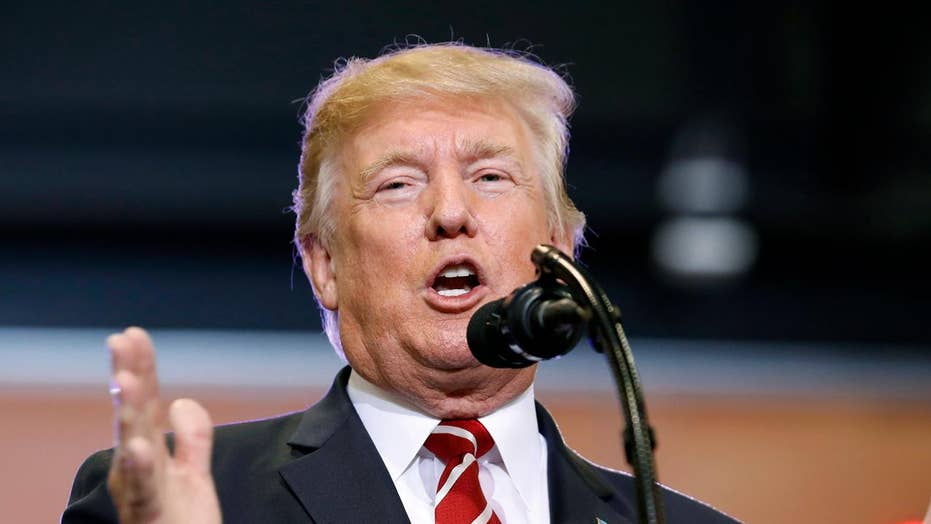 Trump to call for unity in speech to American Legion

John Roberts has the details

The legislation, formally called the Veterans Appeals Improvement and Modernization Act, will “streamline the lengthy process that veterans undergo when appealing their claims for disability benefits” with the Department of Veterans Affairs, a White House spokesperson told Fox News ahead of Trump’s signing.

Trump’s event at the American Legion’s National Convention in Reno, Nev., comes on the heels of a campaign-style rally in Arizona Tuesday night where he lambasted the media and multiple GOP senators.

But the White House says Trump will talk about “unity” in Nevada and will sign the veterans’ bill – which was already passed unanimously by the Senate.

Here’s what to know about the legislation, and Wednesday's event.

What is the bill?

Initially sponsored by Sen. Thad Cochran, R-Miss., the legislation was created to help veterans navigate the VA system and challenge rejected bids for benefits. It’s also intended to alleviate the backlog of appeals through new approaches for veterans seeking benefits.

Veterans “deserve a better system,” Cochran has said about the legislation, adding that for some, it could take years before they are given an answer on benefits.

More than 470,000 veterans are in limbo as they wait for a decision on their benefits, a White House official told Fox News Wednesday morning.

The bill was purportedly supported by several veterans’ service organizations, including the American Legion, Veterans of Foreign Wars, AMVETS and the Disabled American Veterans.

How does this tie into Trump’s campaign promises?

During Trump’s 2016 presidential campaign, he often assailed the VA for its mismanagement and long wait times for veterans and promised to overhaul the department.

Trump also called the government’s second-largest department the “most corrupt” and “most incompetently run agency in the United States.”

What has Trump done so far?

The Department of Veterans Affairs Accountability and Whistleblower Protection Act allows for the removal, demotion or suspension of any VA employee with poor conduct or performance. It also allows the VA secretary to recoup any bonuses awarded to employees who have not acted properly.

“Veterans have fulfilled their duty to this nation and now, we must fulfil our duty to them,” Trump said at the time.

And earlier this month, Trump signed an emergency spending bill that pumps more than $2 billion into a program that allows for veterans to receive private medical care at government expense.

What is expected of Trump in Nevada?

Trump is expected to call for “unity” during his address in Nevada – just one day after he assailed the media coverage of his response to a deadly attack by an alleged white supremacist in Charlottesville, Va.

“It is time to heal the wounds that have divided us, and to seek a new unity based on the common values that unite us. We are one people, with one home, and one flag.” Trump was expected to say, according to prepared remarks provided by the White House.