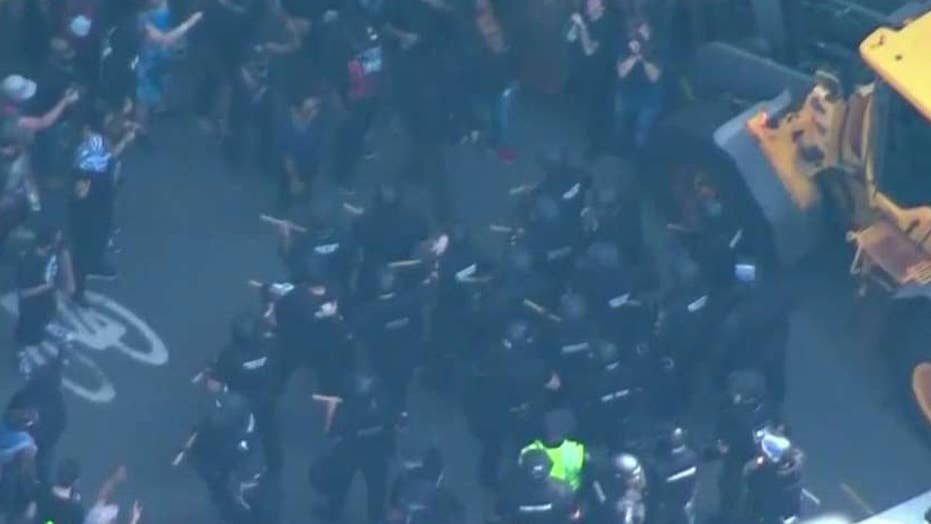 Protesters and police clash in Boston

President Trump on Saturday slammed many of the demonstrators chanting anti-Nazi slogans in Boston as “anti-police agitators.”

“Looks like many anti-police agitators in Boston,” the president tweeted Saturday. “Police are looking tough and smart! Thank you.”

About an hour later, the president expressed his appreciation for peaceful protesters.

"I want to applaud the many protestors in Boston who are speaking out against bigotry and hate. Our country will soon come together as one!" he said.

Trump added that protesting can be healthy for a country.

"Our great country has been divided for decades. Sometimes you need protest in order to heal, & we will heal, & be stronger than ever before!" the president said.

Earlier in the day, a planned "free speech rally" of conservatives was cut short after an estimated 15,000 counter-protesters marched through the city to historic Boston Common.

The president’s comments come as he has faced criticism for saying counterprotesters deserve some of the blame for last weekend’s violence in Charlottesville. A woman was killed at that Unite the Right rally, and scores of others were injured, when a car driven by a white supremacist plowed into counter-demonstrators.

On Saturday, some counterprotesters dressed entirely in black and wore bandanas over their faces. They chanted anti-Nazi and anti-fascism slogans, and waved signs that said: "Make Nazis Afraid Again," ''Love your neighbor," ''Resist fascism" and "Hate never made U.S. great." Others carried a large banner that read: "SMASH WHITE SUPREMACY."

TV cameras showed a group of boisterous counter-protesters on the Common chasing a man with a Trump campaign banner and cap, shouting and swearing at him. But other counterprotesters intervened and helped the man safely over a fence into the area where the conservative rally was to be staged. Black-clad counterprotesters also grabbed an American flag out of an elderly woman's hands, and she stumbled and fell to the ground.

Organizers of Saturday’s "Free Speech Rally" have publicly distanced themselves from the neo-Nazis, white supremacists and others who fomented violence in Charlottesville on Aug. 12.