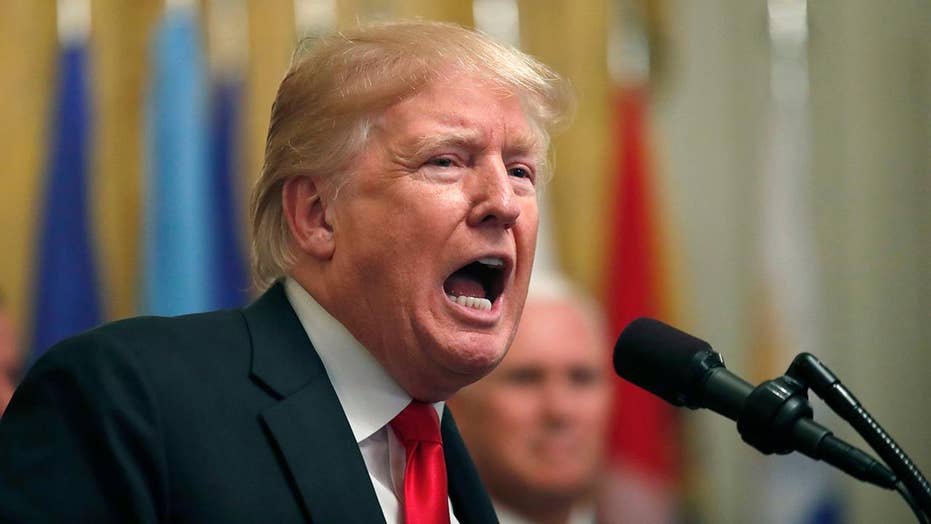 President Trump told The Hill on Tuesday that he'd ordered the declassification of a number of key documents connected with the FBI's investigation of alleged Russian collusion with members of his campaign team to show that the probe was "corrupt" and a "hoax" -- and that exposing it could go down as a highlight of his presidency.

"What we’ve done is a great service to the country, really," Trump told the outlet during an Oval Office interview. "In its own way, this might be the most important thing because this was corrupt."

Trump spoke to The Hill a day after he ordered three sets of documents declassified, including a secret surveillance application for former campaign adviser Carter Page.

In the interview, Trump accused the FBI of using Page as "a foil in order to surveil a candidate for the presidency of the United States.

The FBI earlier released 412 heavily redacted pages of surveillance applications and court orders related to Page. Monday's declassification order covers 21 pages of a 101-page June 2017 application to renew the warrant — the last of four filed by the Justice Department. Page's communications were monitored for nearly a year starting in October 2016.

Reporter John Solomon, who interviewed Trump for The Hill, told Fox News' "Hannity" on Tuesday night that the president was taking a "leap of faith" by ordering the documents made public.

GREGG JARRETT: IF ROSENSTEIN DEFIES ORDER TO DECLASSIFY DOCS, HE SHOULD BE FIRED

"He hasn't even read the documents," Solomon said of Trump. "He's taking a leap of faith that the American public will appreciate the transparency ... He believes this is the right thing to do and he believes that when we see these documents, we're going to find out that the FBI did not act in the best interests of the United States."

Trump also told The Hill that he should have fired Comey, whom he called "a bad guy," immediately upon taking office instead of doing so in May 2017.

The president claimed his only goal in declassifying the documents was to be "transparent" about the investigation.

"I hope to be able put this up as one of my crowning achievements," Trump said, "that I was able to ... expose something that is truly a cancer in our country."