Trump: No collusion came out of Cohen, Manafort cases

President Trump blasted his former attorney, Michael Cohen, for “flipping” on him and praised another ex-lieutenant with legal trouble, Paul Manafort, in an exclusive “Fox & Friends” interview with Ainsely Earhardt airing Thursday morning.

The sit-down comes during a dizzying week that saw Cohen plead guilty and Manafort get convicted for crimes that mostly had to do with their personal business dealings. But Cohen also admitted making hush money payments on behalf of Trump in what prosecutors say amounted to campaign violations.

He continued: “For 30, 40 years I’ve been watching flippers. Everything’s wonderful and then they get 10 years in jail and they—they flip on whoever the next highest one is, or as high as you can go.”

Cohen, Trump's former longtime personal attorney and self-described “fixer,” pleaded guilty Tuesday to five counts of tax evasion, one count of bank fraud, one count linked to an unlawful corporate contribution, and one count stemming from an illegal campaign contribution. The tax and fraud charges were tied to his dealings with a taxi business, while the campaign finance charges related to arranging payments to adult film star Storm Daniels and former Playboy model Karen McDougal “at the direction” of then-candidate Trump.

Cohen is facing up to 65 years in prison on all the counts, but prosecutors have pledged to reduce his sentence sharply as part of the plea deal.

“It almost ought to be outlawed. It’s not fair. Because if somebody’s going to give—spend five years like Michael Cohen, or 10 years, or 15 years in jail because of a taxi cab industry, because he defrauded some bank—the last two were tiny ones,” Trump explained. “You know, campaign violations are considered not a big deal, frankly. But if somebody defrauded a bank and he’s going to get 10 years in jail or 20 years in jail, but if you can say something bad about Donald Trump and you’ll go down to two or three years, which is the deal he made.”

Trump said that “in all fairness” to Cohen, “most people are going to do that.”

“I’ve seen it many times,” Trump said. “I’ve had many friends involved in this stuff. It’s called flipping and it almost ought to be illegal.”

He laid out a scenario in which “you get 10 years in jail, but if you say bad things about somebody in other words, make up stories if you don’t know. Make up. They just make up lies. I’ve seen it many times.”

“They make up things and now they go from 10 years to they’re a national hero. They have a statue erected in their honor. It’s not a fair thing, but that’s why [Cohen] did it,” Trump said.

Trump also seemingly distanced himself from Cohen, downplaying a relationship which spanned over a decade.

“He was a lawyer for me, one of many," Trump said. "You know, they always say, 'the lawyer,' and then they like to add 'the fixer.'” Well, I don’t know if he was a 'fixer.' I don’t know where that term came from. But he’s been a lawyer for me. Didn’t do big deals, did small deals. Not somebody that was with me that much.”

He added: “You know, they make it sound like I didn’t live with—without him. I understood Michael Cohen very well. He—well, it turned out he wasn’t a very good lawyer, frankly.”

Trump said that Cohen worked for him for about 10 years, and he would “see him sometimes,” but noted that while Cohen was involved in big deals, Trump had “outside lawyers” and “inside lawyers, too.”

“I always found him to be a nice guy,” Trump said.

At issue involving the president is the $130,000 payment to Daniels in the weeks prior to the 2016 presidential election in exchange for her silence about an alleged affair with Trump, as well as the McDougal case. McDougal was paid $150,000 by the parent company of the National Enquirer for her, separate, story about an alleged 2006 affair with Trump, which it never published. Cohen admitted Tuesday to making an excessive campaign contribution and causing an unlawful corporate contribution.

But Trump insisted he only knew about hush-money payments made by Cohen “later on,” despite Cohen’s claims to the contrary.

“If you look at President Obama, he had a massive campaign violation but he had a different attorney general and they viewed it a lot differently,” Trump said. Trump was referring to Obama's 2008 campaign being fined $375,000 by the Federal Election Commission for a series of missing notices for more than 1,300 contributions. They totaled $1.8 million.

Trump, though, went on to criticize Attorney General Jeff Sessions, saying he “never took control of the Justice Department." When asked whether he would fire Sessions or Deputy Attorney General Rod Rosenstein, he maintained that he wants to “stay uninvolved” with the DOJ.

Trump added that the “only reason” he appointed him as attorney general was “because I felt loyalty.”

This week, Manafort, Trump's former campaign chairman, was charged on eight counts of tax fraud as part of Special Counsel Robert Mueller’s investigation. Unlike Cohen, Trump noted in the exclusive interview with “Fox & Friends,” Manafort did not ‘flip.’ 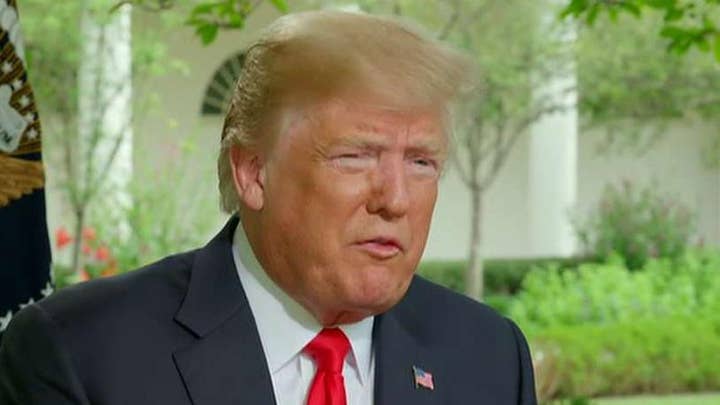 "I have great respect for what he's done in terms of what he's going through.  You know, he worked for Ronald Reagan for years. He worked for Bob Dole. He worked, I guess his firm worked, for [Sen. John] McCain.  He worked for many, many people many, many years, and I would say what he did, some of the charges they threw against him, every consultant, every lobbyist in Washington probably does," Trump said.

He added: "If you look at Hillary Clinton's person, you take a look at the people that work for Hillary Clinton, and look at the crimes that Clinton did with the emails and she deletes 33,000 emails after she gets a subpoena from Congress, and this Justice Department does nothing about it and all of the other crimes that they've done."

Trump said he "didn't know Manafort well," and that his charges were "on things totally unrelated to the campaign."

"And by the way, they got Cohen on [charges] totally unrelated to the campaign," Trump explained. "I'm not involved. I wasn't charged with anything. You know, people don't like to say that, but I wasn't charged."