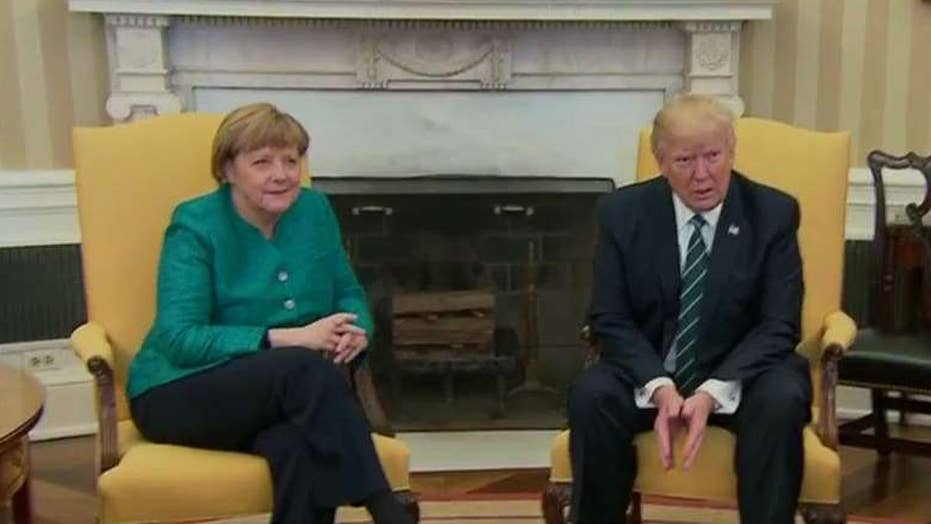 “Many nations owe vast sums of money from past years, and it is very unfair to the United States,” Trump said at the press conference, discussing the need for NATO allies to pay “their fair share” for defense. “These nations must pay what they owe.”

He then thanked Merkel, who was standing beside him, for Germany’s apparent commitment to increase defense spending and work toward contributing 2 percent of GDP to NATO.

According to a source with direct knowledge of the meeting, the comments came after Trump privately pressed Merkel during their discussion to increase NATO spending. While NATO already has asked members to invest 2 percent of their GDP, Germany has fallen under that line.

The joint press conference was amicable, despite Trump’s blunt criticism of the German leader during his presidential campaign.

In a nod to that history and other ongoing disagreements, Merkel said it is “much better to talk to one another than about one another.”

The two leaders met after the visit was postponed from earlier this week due to weather. It marked one of the more potentially awkward encounters between Trump and a foreign head of state, considering his past criticism of the German leader.

During the 2016 campaign, Trump accused her of “ruining” Germany by allowing an influx of refugees from Syria.

“You watch what happens to Angela Merkel, who I always thought of as a very good leader until she did this. I don't know what went wrong with her," said then-candidate Trump at an August rally in Virginia.

But Trump has shown a willingness to move past some his 2016 feuds – both with foreign leaders and U.S. Republican lawmakers – and the focus of Friday’s discussions was pressing security business.

The itinerary included talks on strengthening NATO, fighting the Islamic State and resolving Ukraine's conflict, all matters that require close cooperation between the U.S. and Germany, the White House said.

At the press conference, Trump said they discussed workforce development and vocational training, and numerous global issues. He said they seek a “peaceful solution” to the conflict in Ukraine and added, “Our two countries must continue to work together to protect our people from radical Islamic terrorism. “

The meeting could be a restart of a relationship complicated by Trump's rhetoric on the campaign trail.

Merkel shared a strong bond with former President Barack Obama. And as the leader of Europe's biggest economy and most stable government, Merkel emerged in recent years as the leading voice for a continent struggling with slow growth, identity issues and increased security threats after a string of terrorist attacks.

Despite his criticism during the campaign, Trump still found ways to voice respect. When a television station in September asked him to name a world leader he admired, he cited Merkel.

Merkel's first major encounter with Trump came as she seeks a fourth term as chancellor in elections later this year. She has acknowledged the contest could be difficult and has stressed a need for stability after Britain's decision to leave the European Union.

She reportedly has studied Trump's speeches and policies in advance of her trip, eager to find areas for cooperation.

At the press conference, Trump also disputed any characterization that he is an “isolationist,” scolding a reporter for a related line of questioning. He said he’s a “free trader” and a “fair trader” and reiterated his belief that the U.S. has not been treated fairly.

Meanwhile, he continued to tout the prospects for the House Republican legislation to repeal and replace ObamaCare which could face key votes next week, amid turbulence inside the GOP.

Trump said “it’s coming together beautifully” and predicted it will pass by a substantial margin.