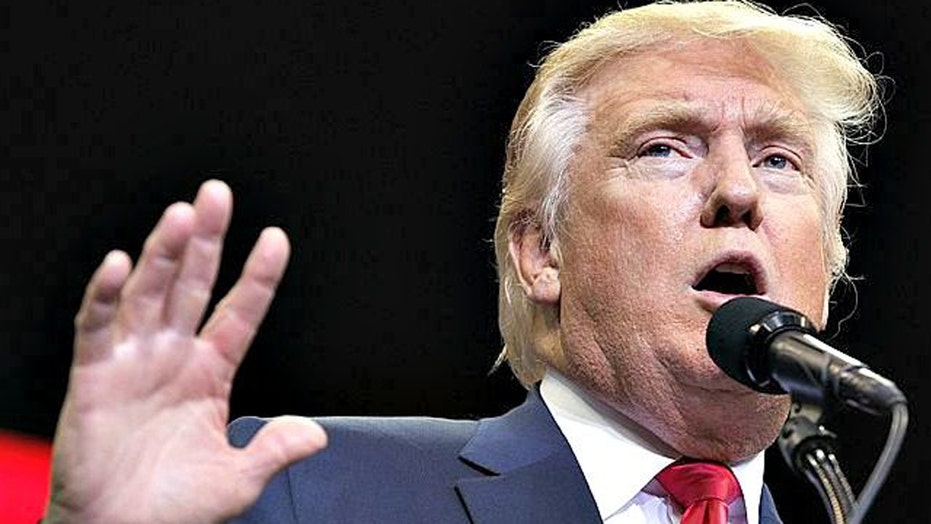 Republican presidential candidate Donald Trump and running mate Mike Pence indicated Saturday that they would fight their election campaign to its conclusion next month, despite calls by prominent Republicans for Trump to withdraw from the race after the emergence of a damaging audio tape.

In the morning, a defiant Trump told the Wall Street Journal that there was "zero chance" that he would drop out over lewd comments he made about women in a 2005 audio tape that surfaced Friday.

"I never, ever give up,” Trump told the paper. "The support I’m getting is unbelievable, because Hillary Clinton is a horribly flawed candidate."

In the afternoon, a smiling Trump briefly appeared outside his Trump Tower headquarters, high-fiving crowd members chanting "U-S-A!" and saying that he “will never let my supporters down.”

In the evening, Pence, who has described himself as a "Christian, a conservative and a Republican, in that order," told a Rhode Island fundraiser that he was committed to the real estate mogul.

"He looked me in the eye and he said, 'Don’t worry, we’re going to get through this, we’re going to be OK,'" Rhode Island GOP Chairman Brandon Bell told WPRI-TV of his meeting with Pence.

"So he didn’t address it head on, but he wanted to reassure people, the folks that were here – and I think he’s going to do this publicly in the next coming days – that we shouldn’t worry, that they’re still on a path to victory," Bell added.

Amid calls for Pence to replace Trump at the top of the Republican ticket, a senior Trump adviser told Fox News late Saturday that the Indiana governor was "solid" behind the nominee.

Earlier Saturday, however, Pence said in a statement that he was "offended by the words and actions described by Donald Trump in the 11-year-old video. I do not condone his remarks and cannot defend them.”

"We pray for his family and look forward to the opportunity he has to show what is in his heart when he goes before the nation tomorrow night," Pence added, a reference to Trump's second presidential debate against Democrat Hillary Clinton in St. Louis Sunday night.

The Indiana governor also cancelled a planned appearance Saturday with House Speaker Paul Ryan in Ryan's home state of Wisconsin. Pence was supposed to fill in for the embattled Trump, and sources said the circumstance surrounding the tape was the issue.

The audio and an accompanying video, released by The Washington Post and NBC News on Friday, recorded a conversation between Trump and "Access Hollywood" host Billy Bush in which Trump described an attempt to have sex with a married woman.

Trump brags in the tape about women letting him kiss and grab them because he is famous, and also uses a crude word for a part of a woman's anatomy.

The 70-year-old Trump apologized overnight for the comments, saying they “don’t reflect who I am.”

“I said it, I was wrong, and I apologize," Trump said in videotaped remarks, after he originally apologized in a statement.

Throughout the day Saturday, several Republicans took the extraordinary step of revoking support for their party's nominee one month from Election Day and with early voting already underway in some key states.

Among them: Ohio Sen. Rob Portman, New Hampshire Sen. Kelly Ayotte -- both are running for re-election -- and the party's 2008 nominee, Arizona Sen. John McCain, who had stood by Trump even after the billionaire questioned whether the former POW should be considered a war hero because he got "captured."

McCain, who is also facing a challenge in November, said Trump's behavior made it "impossible to continue to offer even conditional support for his candidacy."

Many went further and called on Trump to quit the race altogether.

Character matters.@realDonaldTrump is obviously not going to win.
But he can still make an honorable move:
Step aside & let Mike Pence try.

Republican leaders have scheduled a Monday morning conference call for House GOP lawmakers, who are out of town for Congress' election recess. The email obtained by The Associated Press doesn't specify the topic for the 11 a.m. EDT call, but rank-and-file lawmakers believe it's about Trump. Such calls are rare and usually held to discuss important matters.

While still publicly backing Trump, the Republican National Committee is considering how to move forward.

One possibility: re-directing its expansive political operation away from Trump and toward helping vulnerable Senate and House candidates. Such a move would leave Trump with virtually no political infrastructure in swing states to identify his supporters and ensure they vote.

Election law experts suggest it would be logistically impossible to replace Trump on the ballot altogether, with early voting underway in some states and overseas ballots already distributed to military servicemen and others.

Ryan fundraising chief Spencer Zwick, however, said he's been fielding calls from donors who "want help putting money together to fund a new person to be the GOP nominee."

Zwick told the AP that a write-in or "sticker campaign" relying on social media could "actually work." While there has never been a winning write-in campaign in a U.S. presidential contest, such an effort could make it harder for Trump to win.