Trump: North Korea summit would be great for the world

President Donald Trump on Saturday said talks regarding a possible summit with North Korea were “going along very well,” just days after he canceled next month’s highly anticipated meeting with the rogue nation.

“We’re doing very well in terms of the summit with North Korea,” Trump said at the White House after welcoming home Joshua Holt, who returned to the U.S. on Saturday after being incarcerated in a Venezuelan jail. “Looks like it’s going along very well.”

American imprisoned in Venezuela reunites with his family.

Trump said meetings were ongoing and they were still “looking at June 12 in Singapore, that hasn’t changed.”

He added that if “it would be a great thing” if they were “successful in the denuclearization of the Korean Peninsula.”

The president’s remarks followed a surprise meeting Saturday between North Korean leader Kim Jong Un and South Korean President Moon Jae-in, during which the pair agreed their countries would have “high-level talks” next month and Kim “expressed his fixed will” on meeting with Trump, according to Yonhap News. 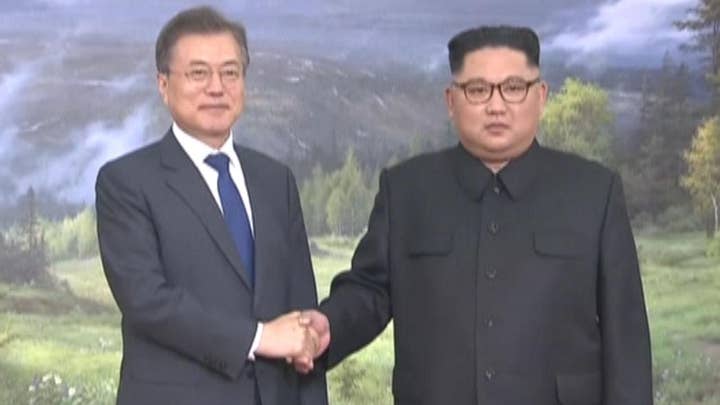 On Sunday, Moon told reporters that Kim committed to meeting with Trump and to a "complete denuclearization of the Korean Peninsula," the Associated Press reported.

The two Korean leaders met on the North Korean side of the demilitarized zone in the village of Panmunjom to discuss peace commitments made during their historic first summit last month. They also reportedly talked “frankly” about how they could make the potential summit between Kim and Trump a success.

The meeting came hours after South Korea expressed relief over revived talks for a summit between Trump and Kim following a whirlwind 24 hours that saw the U.S. president cancel the meeting.

"Kim Jong-un thanked Moon Jae-in for much effort made by him for the DPRK-U.S. summit scheduled for June 12, and expressed his fixed will on the historic DPRK-U.S. summit talks," Yonhap reported, citing the Korean Central News Agency (KCNA). "Kim Jong-un told Moon Jae-in to positively cooperate with each other as ever to improve the DPRK-U.S. relations and establish mechanism for permanent and durable peace.”

The leaders of the neighboring countries said they would hold “high-level talks” on June 1 and also promised to “meet frequently in the future to make dialogue brisk and pool wisdom and efforts, expressing their stand to make joint efforts for the denuclearization of the Korean Peninsula,” Yonhap reported.

The talks between North and South Korea was initially supposed to occur earlier this month until it was called off by the North, citing military exercises conducted by the South and the U.S.

Prior to Kim and Moon’s meeting, Trump suggested that his summit with North Korea may still go ahead.

“We are having very productive talks with North Korea about reinstating the Summit which, if it does happen, will likely remain in Singapore on the same date, June 12th., and, if necessary, will be extended beyond that date,” Trump tweeted.