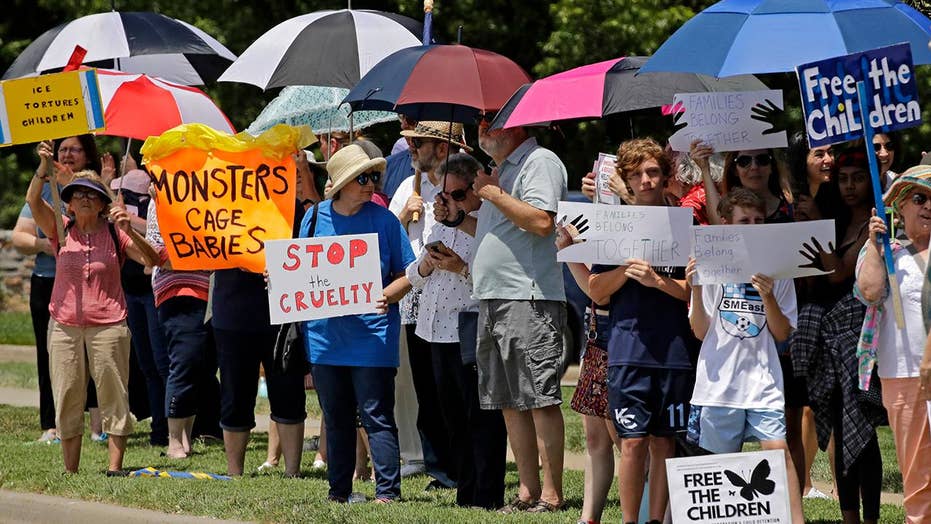 The protests were part of a national day of action with events taking place in more than 180 locations.

President Trump lashed out at Democrats via social media on Wednesday following calls from Senate Minority Leader Chuck Schumer, D-N.Y., for the head of Customs and Border Protection (CBP) to be fired and plans by two House committees to hold hearings on the treatment of migrants held after crossing the southern border.

By way of Twitter, the president blamed the Democrats for the migration crisis along the border with Mexico, and for opposing the $4.6 billion border bill.

“Our Border Patrol people are not hospital workers, doctors or nurses,” Trump tweeted. “The Democrats bad Immigration Laws, which could be easily fixed, are the problem. Great job by Border Patrol, above and beyond.”

In another tweet, Trump added: “No matter how good things actually look, even if perfect, the Democrat visitors will act shocked & aghast at how terrible things are. Just Pols. If they really want to fix them, change the Immigration Laws and Loopholes. So easy to do!”

Trump’s tweets came on the heels of Schumer’s call for the removal of Acting CBP Commissioner Mark Morgan following reports that current and former agency employees belonged to a Facebook group containing offensive content about migrants.

“The inspector general’s report and details of a secret Border Patrol workers’ Facebook group paint a picture of a toxic culture at U.S. Customs and Border Protection that can only begin to be changed by immediately firing and replacing top leadership at the agency with law enforcement professionals who have training and expertise in working with vulnerable populations," Schumer said in a statement on Wednesday.

“I have directed an immediate investigation, and as the @USBPChief has made clear, any employee found to have compromised the public’s trust in our law enforcement mission will be held accountable. They do not represent the men and women of the Border Patrol or @DHSgov," he tweeted.

The migrant crisis and border funding have been front and center in Washington this week, especially after freshman Rep. Alexandria Ocasio-Cortez, D-N.Y., visited migrant detention facilities alongside a dozen members of the Congressional Hispanic Caucus, where she blasted border officials and claimed agents had forced migrant women and children in cells to drink toilet water.

Ocasio-Cortez has faced criticism from conservative commentators and politicians over her claims, her “hell no” vote last week on a bipartisan bill to provide $4.6 billion in funding for the crisis, and her vote against an earlier, Democrat-backed aid package. She was insistent that restrictions on immigration enforcement be included.

Immigration officials maintain that they are resource-starved in the face of a migration surge. A Department of Homeland Security (DHS) official told Fox News that CBP agents are “not equipped for the sheer volume of people” in facilities.

Health and Human Services (HHS) "is backed up with children, so there is a real backlog at the CBP facilities there,” the official explained. “It’s a real problem. The supplemental funding will help, but it’s a Band-Aid on a much bigger problem.”