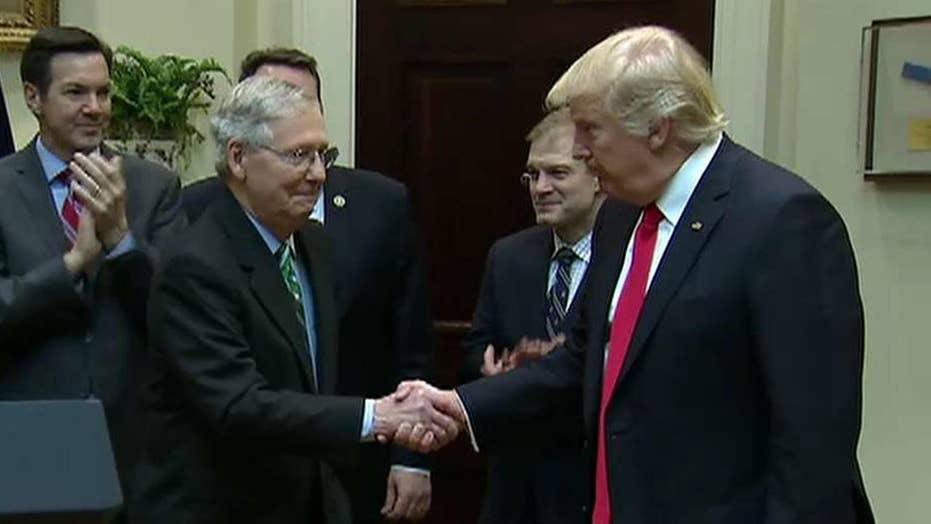 The president took to Twitter to criticize the Senate majority leader

President Trump Thursday raised the possibility of Senate Majority Leader Mitch McConnell, R-Ky., resigning his post if McConnell fails to get the president's agenda through the Senate.

Trump made the comments hours after posting a message on Twitter telling McConnell to "get back to work and put Repeal & Replace, Tax Reform & Cuts and a great Infrastructure Bill on my desk for signing.

The president's ongoing salvos against McConnell appear to be in response to the Senate Majority Leader's remark in his home state this week that Trump had "excessive expectations about how quickly things happen in the democratic process." They also give voice to a segment of the Republican base who are out to punish what they see as a "do-nothing Congress" that has hampered the president's goals.

Doug Deason, a major donor based in Texas who said he decided months ago not to give money to any Republicans up for re-election next year unless they can pass Trump's priorities, described McConnell to the Associated Press as "a coward who leads from behind," ''spineless," and a lifelong "political animal" of the sort Trump wants to eject from Washington.

"Virtually any substantial goals that the president intends to achieve, whether it is tax reform or more infrastructure, requires the active assistance of the Senate majority leader," said Michael Steel, who was spokesman to former House Speaker John Boehner.

Even Newt Gingrich, a Trump backer and informal adviser who formerly served as speaker of the House, criticized the dispute.

"You saw Mitch McConnell say something, you saw Trump say something, when it's obviously better for them to learn not to do that," Gingrich said. "They have to work together. Governing is a team sport."

"The leader has spoken repeatedly about the path forward regarding Obamacare repeal and replace on the Senate floor, at media availabilities and in Kentucky," McConnell spokesman David Popp said Thursday before Trump's comments.

Trump, 71, and McConnell, 75, have never been easy allies, even though the senator's wife, Elaine Chao, is the president's transportation secretary. McConnell only met Trump for the first time in 2013, when he made a pilgrimage to Trump Tower in New York to ask the businessman for campaign money.

But McConnell quickly boarded the Trump train once the mogul secured the GOP nomination, and unlike House Speaker Paul Ryan and others, he never wavered. He's paid numerous visits to the White House this year and traveled with Trump in March to Louisville. That Trump rally predated all of Congress' attempts to redo health care, and the president urged the crowd to "be nice" to McConnell.

Fast forward to August, with the Senate on recess after the collapse of the GOP health care bill.

Brent Bozell, a longtime McConnell detractor and president of the conservative social media group For America, said the Senate leader had made a ridiculous argument that will haunt him.

"By calling President Trump a political neophyte, McConnell is saying that Trump doesn't understand that Congress doesn't keep its promises," Bozell said. "This is exactly why Trump won — to shake up Washington, and that includes Republicans."

And yet, in opening a door he might want to try to shove McConnell out of, Trump once against demonstrated his naivete in Washington's ways. A Senate majority leader is elected by members of his own conference, and McConnell has plenty of support within his, regardless of anything Trump may say about it.

Sen. Orrin Hatch of Utah, a senior lawmaker and vocal Trump backer, said over Twitter that McConnell "has been the best leader we've had in my time in the Senate, through very tough challenges. I fully support him."