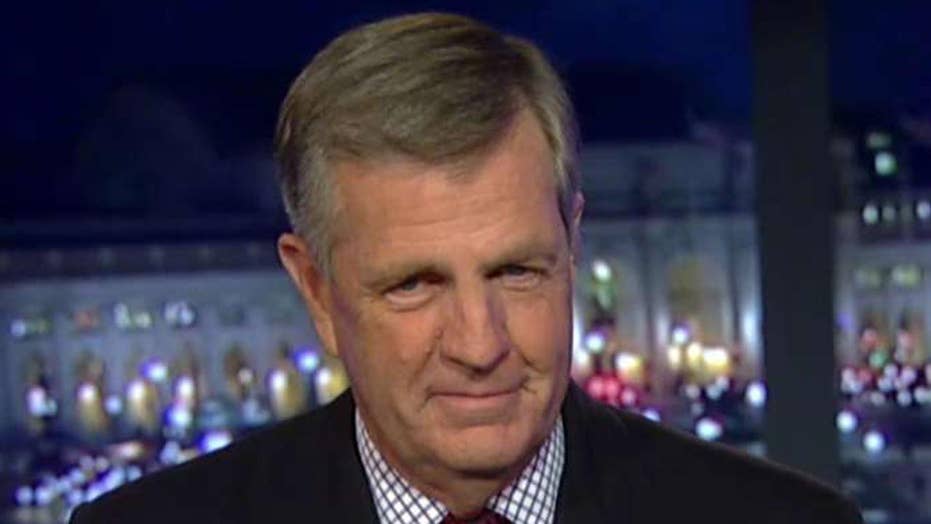 Reaction to President Trump's decision to fire FBI Director James Comey was split along partisan lines Tuesday, with Republicans claiming that Comey's dismissal would mark a fresh start for the bureau, even as Democrats called for a special prosecutor to investigate the Trump campaign's contacts with Russian officials.

Comey told lawmakers in March that the FBI was conducting a counterintelligence investigation into Russian attempts to interfere in the 2016 election campaign, an investigation that included possible links between members of the Trump campaign and Moscow.

Senate Minority Leader Chuck Schumer, D-N.Y., said he told Trump "you are making a big mistake" when the president called to inform Schumer that he was firing the FBI director.

"The first question the administration has to answer is, ‘Why now?’" Schumer told reporters. "Were these investigations getting too close to home for the president?"

Schumer then called on Deputy Attorney General Rod Rosenstein to appoint a special prosecutor, saying "America depends on you to restore faith in our criminal justice system, which is going to be badly shattered after the administration’s actions today."

Other Democrats attributed sinister motives to Comey's firing, with two Senators, Bob Casey of Pennsylvania and Patrick Leahy of Vermont, describing it in press statements as "Nixonian." Another Democratic senator, Ed Markey of Massachusetts, said the firing "is disturbingly reminiscent of the Saturday Night Massacre during the Watergate scandal and the national turmoil that it caused," later adding "We are careening ever closer to a Constitutional crisis."

House Minority Leader Nancy Pelosi said the firing "raises the ghosts of some of the worst Executive Branch abuses" and called for "an independent, bipartisan commission" to continue the Trump-Russia investigation.

Sen. Ron Wyden, D-Ore. said that Comey "should be immediately called to testify in an open hearing about the status of the investigation into Russia and Trump associates at the time he was fired."

"This is just one person. It's the director," Collins said. "The investigation is going forward, both at the FBI and in the Senate Intelligence Committee in a bipartisan way."

The chairman of the Senate intelligence committee, Sen. Richard Burr, R-N.C., said he was "troubled by the timing and reasoning" for Comey's dismissal.

"In my interactions with the Director and with the Bureau under his leadership, he and the FBI have always been straightforward with our Committee," Burr said in a statement. "Director Comey has been more forthcoming with information than any FBI Director I can recall in my tenure on the congressional intelligence committees. His dismissal, I believe, is a loss for the Bureau and the nation."

Burr's statement was echoed by Sen. Ben Sasse, R-Neb., who said "the timing of this firing is deeply troubling."

"Jim Comey is an honorable public servant, and in the midst of a crisis of public trust that goes well beyond who you voted for in the presidential election, the loss of an honorable public servant is a loss for the nation," Sasse said. "As the chairman of the Judiciary Committee's Oversight Subcommittee, I have reached out to the Deputy Attorney General for clarity on his rationale for recommending this action."

Jeff Flake, R-Ariz. tweeted that he had "spent the last several hours trying to find an acceptable rationale for the timing of Comey's firing. I just can't do it."

Sen. Lindsey Graham, R-S.C., a member of the Senate Judiciary Committee, supported Comey's ouster, citing Comey's actions during the 2016 election campaign: "Given the recent controversies surrounding the director, I believe a fresh start will serve the FBI and the nation well. I encourage the President to select the most qualified professional available who will serve our nation’s interests."

Sen. Bob Corker, R-Tenn., the chair of the Senate Foreign Relations Committee, acknowledged that the timing of Comey's firing "will raise questions."

"It is essential that ongoing investigations are fulsome and free of political interference until their completion," Corker added, "and it is imperative that President Trump nominate a well-respected and qualified individual to lead the bureau at this critical time."

Sen. John McCain, R-Ariz., said he was "disappointed" in Trump's decision to fire Comey, calling the dismissed director "a man of honor and integrity" who "has led the FBI well in extraordinary circumstances."

"I have long called for a special congressional committee to investigate Russia's interference in the 2016 election," McCain added. "The president's decision to remove the FBI Director only confirms the need and the urgency of such a committee."

Former Director of National Intelligence James Clapper also weighed in, saying in a brief statement, "I have immense respect and admiration for Jim Comey. This is a tremendous loss for the FBI and the nation."