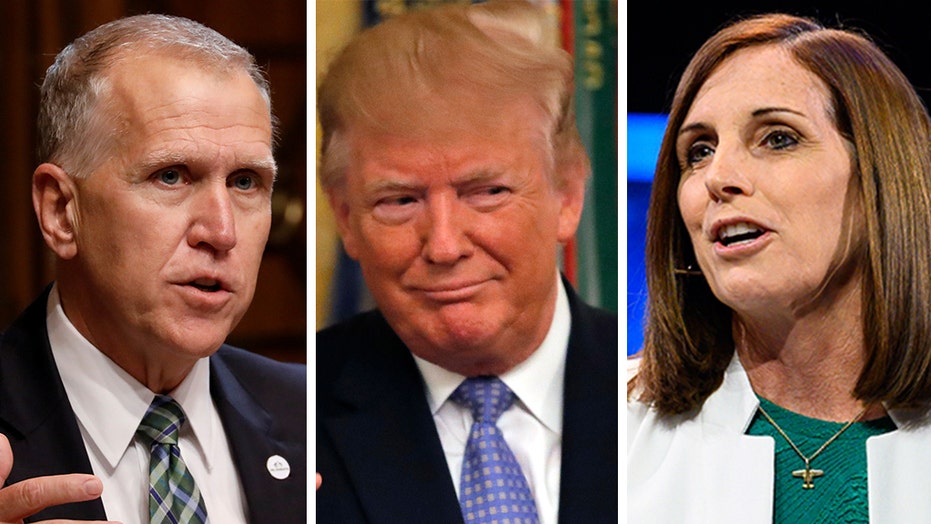 Trump announced his endorsements in separate tweets on Tuesday. He first announced his support for McSally, the first female fighter pilot to fly in combat, in one of the most hotly contested Senate races of the 2020 election.

“A brave former fighter jet pilot and warrior, Senator Martha McSally of Arizona has done an outstanding job in D.C., and is fully supportive of our agenda – she is with us all the way,” Trump tweeted on Tuesday. “Martha is strong on Crime and Borders, the 2nd Amendment, and loves our Military and Vets. She has my Complete and Total Endorsement!”

The Arizona Republican, who served 26 years in the Air Force, has been a senator in the state since last December.

McSally was defeated by Democrat Kyrsten Sinema in the 2018 Senate election by two percentage points. Interim Sen. Jon Kyl then announced he would resign as Arizona's other senator, and Republican Gov. Doug Ducey chose McSally to replace Kyl.

Later Tuesday, Trump tweeted his support for Tillis, providing a major political asset for the first-term Republican senator already facing a primary challenge for his reelection next year in the closely divided state.

“Senator Thom Tillis of North Carolina has really stepped up to the plate,” Trump tweeted. “Thom is tough on Crime, Strong on the Border and fights hard against Illegal Immigration. He loves our Military, our Vets and our great Second Amendment. I give Thom my Full and Total Endorsement!"

ARIZONA GOP SEN. MARTHA MCSALLY SAYS SHE WAS 'PREYED UPON AND THEN RAPED' IN AIR FORCE BY SUPERIOR OFFICER

Trump announced the endorsement despite the fact that Tillis has faced criticism from members of the state's GOP base, who questioned whether he has given complete support to the president.

Retired investment company firm executive Garland Tucker jumped into the primary last month and has made Tillis' initial opposition to Trump's emergency declaration for a wall at the Southern border a campaign issue.

Lately Tillis, who serves on the Senate Judiciary Committee, has given more public support to the president, even posting a video showing his support of Trump's court nominations.

The primary is set for March.

At least four Democrats, including three current or former state legislators and a county commissioner, have lined up to run against their Republican challenger.

Former state Sen. Cal Cunningham, who ran for U.S. Senate in 2010, and ex-Sen. Eric Mansfield, who ran for lieutenant governor in 2012, were among those who planned to enter the race.